Guest Post: As Abdulhadi AlKhawaja nears death in a Bahraini prison, the U.S. shows no signs of coming to his aid 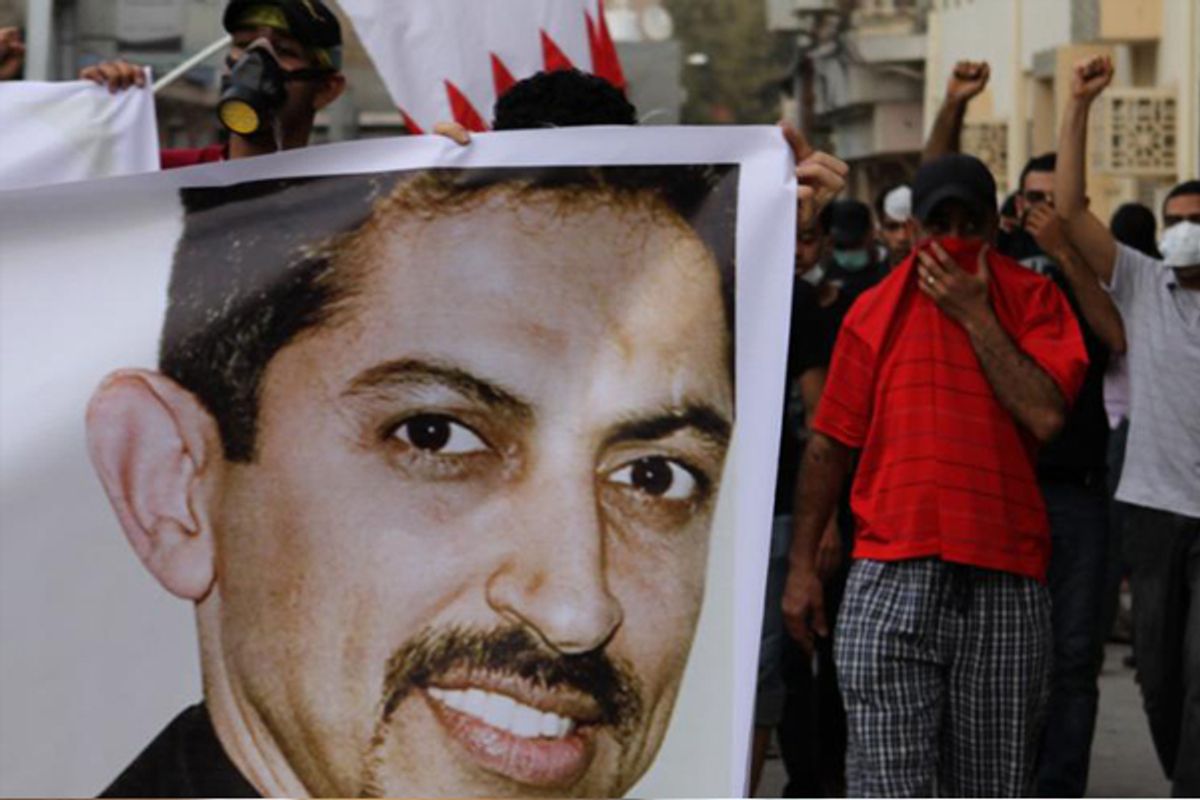 Behind the walls of a prison compound, the man who helped lead last year’s pro-democracy protests in Bahrain is continuing a lonely, painful battle for freedom away from the media spotlight. Abdulhadi AlKhawaja has endured beatings, torture and a life sentence handed down from a military court, all for the “crime” of advocating human rights and democracy in his country. In response to these injustices, on February 8th 2012 he initiated a hunger strike which he promised to continue until either his release or his death, and which he has now led into its 61st day. After refusing to eat for two full months in protest of his imprisonment and torture he remains defiant, but the limits of what his body can take are being reached. After literally fighting prison officials to visit him, an act for which she was also detained for several days, his daughter reported that Khawaja is experiencing difficulty breathing and appears to be near death. As she described her brief visit with her father, "His tone and the way he was speaking were like he was saying goodbye….we're not sure if we'll ever see him again.” On the eve of his sentencing last year to life imprisonment, in a trial described by Amnesty to be unfair and politically motivated, Khawaja had raised his fist and proclaimed his intention to “continue on the path of peaceful resistance”, a promise which he has steadfastly kept and which has today brought him to this breaking point.

While Khawaja continues to peacefully resist by whatever means in his power, the Bahraini regime continues to suppress with brute force the pro-democracy movement he helped spearhead. Despite its criminal abuse of a prominent human rights champion in the Arab world, and despite the documented instances of killings, torture, and indefinite imprisonment of countless other Bahraini citizens, the U.S. government continues to support the Al-Khalifa regime in the face of its democratic uprising and refuses to publicly call for the release of Alkhawaja and other pro-democracy activists. While the U.S. has consistently proclaimed its intention to champion the cause of democratic uprisings in the Middle East and around the world, there continues to be a policy of “business as usual” in its dealings with a Bahraini government which has moved aggressively to crush a peaceful citizens movement calling for democracy and respect for human rights. Indeed, while the regime was wrapping up a campaign of torture and murder directed at democracy activists, the U.S. lawmakers pursued a decision to resume arms sales to Bahrain, pushing forward a $53 million dollar sale of weaponry and other equipment to the country. In the midst of loud denunciations of the atrocities of Bashar Assad in Syria and coming on the heels of a military campaign ostensibly fought to protect the democratic uprising in Libya, the decision to not just support but to continue arming the Bahraini regime is one that flies in the face of stated U.S. priorities in the region. While several American officials are reported to have promised Bahraini activists that they would privately lobby for the rights of Khawaja and others who are suffering the abuses of the regime, the U.S. government has steadfastly declined to offer a public condemnation of the documented crimes of its Gulf ally, nor will it openly call on them to release Alkhawaja or any of the other detainees whom Amnesty International has designated to be prisoners of conscience.

Part of the reason for the reluctance of U.S. officials to publicly call on the regime to free Alkhawaja and end its crimes is the strategic importance of Bahrain to U.S. interests in the Middle East. Home to the U.S. Navy’s 5th fleet, the island nation has long served as a logistical base for U.S. naval operations, and in recent years as a staging ground for military campaigns elsewhere in the region. Calling on the Al-Khalifa regime to respect the democratic aspirations and basic rights of its citizens may risk damaging a relationship which has proven useful to U.S. military interests, a circumstance which has given the regime a free hand to repress dissent without fear of censure. In addition to the leverage of these shared interests provide, the Bahraini regime has also been expended huge resources on a lobbying campaign to manage its public image and to influence members of Congress to shield it from pressure over its rights violations. Democratic rep. Eni Faleomavaega, one of whose major campaign donors heads a lobbying firm serving the Bahraini government, has in particular emerged as a staunch public defender of the regime’s crackdown. At the height of the violence campaign of repression towards protestors and just days after the government tore down the iconic Pearl Monument in Manama which had served as a symbol of the revolution, Faleomavaega came out in defense of the regime and asked “why the demonstrators are protesting again, even after all their demands were agreed to.” No one except Faleomavaega knows which demands had been “met”, as Bahrain today remains governed by an undemocratic monarchy which tortures and imprisons its citizens with impunity – including activists like Alkhawaja.

Aside from the moral vacuity of abandoning the fate of an internationally renowned human rights campaigner to the hands of a corrupt, monarchical regime, there is the real risk that his death in custody may result in the dangerous radicalization of what has heretofore been a remarkably peaceful democratic uprising. For his incredible determination and self-sacrifice Abdulhadi Alkhawaja has rightly earned an esteemed place in the imagination of ordinary Bahrainis, many of whom see him as a symbol of their own dream of a free and democratic Bahrain. The outrage which his death would create has the potential of triggering widespread, potentially violent protest and shattering whatever semblance of stability has existed in the country since the revolution was violently quelled. Releasing Alkhawaja would be the biggest step the Bahraini government could take to mollify the explosive popular discontent which still exists in the country and to prove that it is serious about the democratic reforms it promised to commit to in the landmark Bahrain Independent Commission Inquiry, published in the aftermath of the previous year of unrest. Despite this, they have refused foreign entreaties to release him and an offer from Denmark to give him asylum there. As he enters his 61st day without food and with his health rapidly deteriorating, the Al-Khalifa regime continues to demonstrate its willingness to let Alkhawaja die whatever the consequences.

The one country which has leverage over the regime and whose words it could not ignore without consequence is the United States. President Obama has long made it known that he intends to stand behind those who are calling for reform in the region, and who are in many cases fighting and dying for the right to receive their basic human rights and political self-determination. Publicly calling for the release of Abdulhadi Alkhawaja is the bare minimum that the U.S. can do to demonstrate the sincerity of its pledge to support democracy in the Middle East.  The defiance Alkhawaja continues to show through his actions has justifiably made him a hero to many of those in the region struggling under the weight of oppressive regimes. He has suffered through unconscionable torture at the hands of Bahraini security forces and yet has remained steadfast in his commitment to peacefully fighting for his rights and the rights of all Bahraini citizens. Standing silent as he dies would be an act of moral cowardice on the part of the United States and a betrayal of its promise to support those who stand against tyranny. Alkhawaja has survived for 60 days without food, enduring beatings and torture from prison staff throughout this time, and yet has still remained true to his pledge of peaceful resistance and the acceptance of only one ultimate outcome between freedom and death. At present the U.S. is siding with the regime in its campaign against its citizens through its silent complicity over its ally’s crimes and through continuation of arms sales.  If it does stand on the side of those fighting for democracy in the Middle East it is time for the United States to make its voice heard and call for the immediate release of Alkhawaja before it is too late.