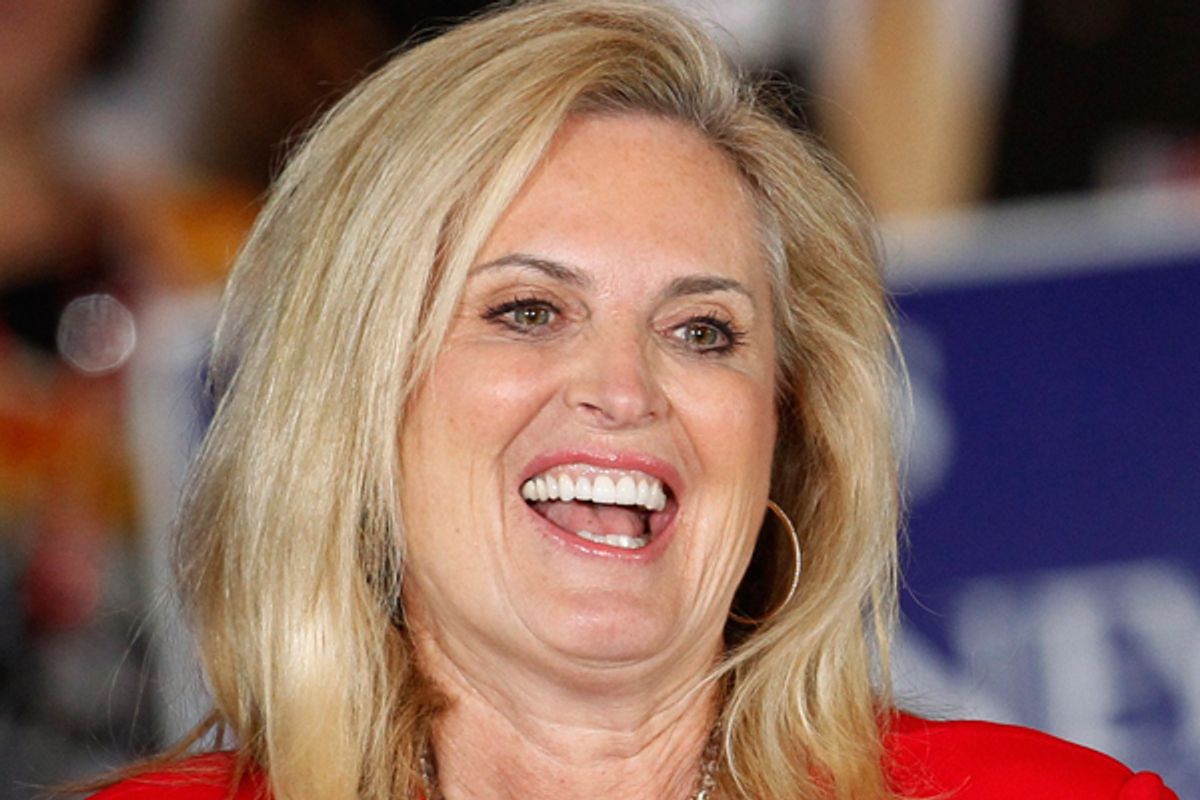 Mitt Romney's "I know you are, but what am I?" strategy, declaring President Obama the real perpetrator of a "war on women," got an assist from CNN Democratic analyst Hilary Rosen Wednesday, when she questioned whether Romney should use his wife, Ann, as his expert on women's issues when she "never worked a day in her life." As feminists have known thanks to the silly Mommy Wars over the last 20 years, every mother is a working mother. Rosen, who is herself a mom who also works outside the home, has now apologized, as has every prominent Democrat from President Obama to Debbie Wasserman Schultz to David Axelrod (and probably FDR, from the grave).

But Republicans still won't shut up about it. An aggrieved Ann Romney even told Fox News, “I will tell you that Mitt said to me more times than I can imagine, Ann, your job is more important than mine,” and added that as the mother of five grown boys, "I know what it's like to struggle."

Well, I'd like to demand that Ann Romney apologize to all women for equating the "struggle" of a wealthy mother who had full-time household help to that of a poor or working-class job-holding mother, who must choose between her job and her children when a child gets sick. How dare you, madam? Have you no shame? I'd like to demand that Mitt Romney apologize for his wife's remarks, too. I'd like to hear every prominent Republican denounce Ann Romney for her heinous insensitivity to non-wealthy mothers who must work outside the home.

Wait. Ann Romney's not a Democrat, and I'm not a Republican, so that's not how the world works. Sorry about that. I apologize.

No, Ann Romney doesn't need to apologize – but in a grown-up world, Hilary Rosen wouldn't have had to either. The point Rosen was making was, and is, valid: Mitt Romney repeatedly refers to his wife, Ann, in lordly terms, "reporting" to him what matters to women. Reporting to him, like she's an employee, or maybe a translator. It's valid to suggest that he ought to talk about what women believe from his own experiences, or what he learns from women colleagues, co-workers, campaign staff. He should stop referring to his wife's "reports" about women's issues, sounding like Thurston Howell III.

And the fact is, Ann Romney's experiences are not the average woman's. She is a woman of great privilege. Most mothers don't have the "choice" to stay home full time with their kids; they need a paycheck. Meanwhile, her husband supports the Paul Ryan budget, which cuts nutrition programs for pregnant women and new moms and their kids. It cuts Medicaid for poor women and children. It slashes food stamp funding, when women and children make up two-thirds of the people who get food stamps. He wants to get rid of Planned Parenthood, which provides not just contraception but breast cancer and cervical cancer screenings for millions of low-income women.

In blasting the Obama campaign for the remarks of a Democrat unrelated to his campaign, Concerned Women for America called motherhood "the most important job there is." Except when poor women do it, that is. Republicans crusaded to kill Aid to Families With Dependent Children (supported eventually by Bill Clinton and other Democrats) to make sure that poor women joined the workforce. Motherhood is "the most important job there is" unless your children are poor. What a bunch of hypocrites.

I'm sure Ann Romney knows what it's like to struggle. We all do; it's the nature of being human. But in the political arena we really ought to be able to distinguish between personal struggles, and struggles that have social and political causes and implications. It reminded me of when Bill O'Reilly told Rev. Al Sharpton's National Action Network, "I'm not black so I don't know your struggle and you don't know my struggle because you're not white." Nobody knows the troubles Bill's seen, growing up on the mean streets of Old Westbury. I'm not saying that white people can't face injustice, but to equate the black and white "struggles" is just ridiculous. Ann Romney is smart enough to distinguish between her own "struggles" and those of women who work at low-wage jobs and struggle to raise their children safely.

I debated the faux-controversy over Rosen's remarks on "Hardball" today with Michael Steele: