"Girls" lives up to the hype 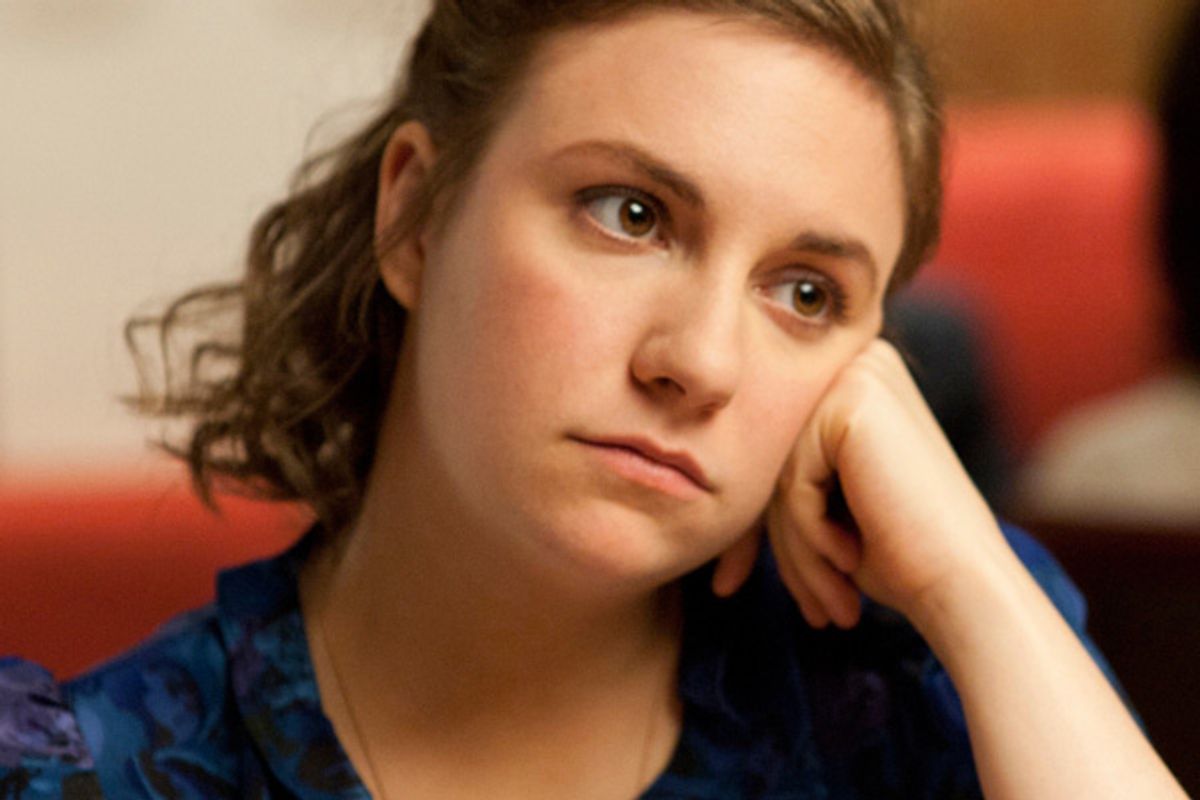 HBO’s “Girls,” a new comedy about four affluent, early 20-something friends boldly and haplessly talking, tweeting and screwing their way through starter jobs, clueless dudes and New York City’s outer boroughs, is easy to love and even easier to worry about. The many articles already written about the zeitgeist-crashing series, created by and starring the 25-year-old Lena Dunham, reflect this, falling into two overlapping categories, give or take a few outliers: the rave review— of which, to be clear, this will be one— and the concerned cultural report, in which the type of frank, awkward sex that the girls in “Girls” are having is deemed bleak, depressing, prudish or in some other way alarming. While the raves dole out the love and the cultural reports the apprehension, the latter may be the more flattering: Those are the pieces that proceed as if “Girls” were not fiction at all, but a sort of factual report about female sexuality dispatched from the front lines of gentrified Brooklyn. (It’s funny, if “Girls” were a reality show we’d be debating what about it was fake and staged. Because it’s fiction, we’re debating not even what about it is real, but what the realness means. Or is that “funny”?)

I have to confess that I have enjoyed both the raves and condescending hand-wringing, not because I find the show to be a sexual doomsayer, but because it alleviates my own set of anxieties to have "Girls" taken so seriously. I’ve been worried about “Girls” too. My concern was that “Girls” speaks so specifically and accurately to the experience of me and my census buddies — and to be clear, that’s urban white girls with safety nets; have at us in the comments — that people would either write it off as navel-gazing, snark at the innate privilege undergirding the whole thing, or find it unrelatable. “Girls” is smart, bracing , funny, accurately absurd, confessional yet self-aware, but it is also undeniably about four white chicks with, relatively speaking, no worries in the world. And so, as just such a white chick, I have spent the last few weeks, to paraphrase a question oft asked by bubbes and zeydes, nervously wondering of the show and its high profile, “Is it good for the girls?” So far so good.

About these girls: The ringleader is Dunham’s Hannah Horvath, an aspiring memoirist— she's finished four chapters, only has five and an entire life to live left to go— who has been living off her parents since college, but, just as the series begins, is abruptly cut off. Fast-talking, tattooed and good-natured, Hannah is a messy compilation of only seemingly contradictory traits. She ambitiously claims under the influence of opium that she might be “the voice of her generation. Or the voice of a generation,” but ruins job interviews with ill-timed rape jokes, does not have the energy to eat cupcakes in the shower while standing up, and often arrives late. She’s neurotic enough to spend an entire episode wondering about the stuff that “gets up around the sides of condoms,” but is also easygoing and affable, even in situations where being easygoing and affable are not necessarily warranted, as when one’s sexual partner is being vague about whether he is using a condom at all. Watching Hannah can be excruciating, embarrassing and cringe-worthy, but as Hannah says to her gynecologist during a checkup, “It hurts, but the way it’s supposed to.”

Hannah lives with her best friend Marnie (Brian Williams daughter Allison; all four of the actresses on “Girls” have famous parents), already a more mature, put together and adult force than her friends. She has a sweet, doting boyfriend who, as Hannah succinctly puts it, has a metaphorical vagina. Marnie has no interest in having sex with him. (For all the distress "Girls" has stirred up about the sexual lives of young women, I don’t see how the concerned parties can watch it and feel great about the sex lives of "Boys" either.) The foursome is rounded out by the debonair, sophisticated, well-traveled and flaky Jessa (Jemima Kirke, whose crack timing makes her the series’ comedic standout) and the virginal, chirpy Shoshanna (Zosia Mamet, the weak link of the bunch), who, as the least worldly member of the crew, is obsessed with “Sex and the City,” which, in the pilot anyway, is meant as a sort of character burn. Shoshanna describes herself as "definitely a Carrie at heart, but sometimes Samantha comes out. And when I'm at school, I try hard to put on my Miranda hat," when, of course, she is a total Charlotte, which  Dunham and the writers of "Girls" -- admitted "SATC" watchers -- must know. It's a deft little jab at the aspirational fantasy components of "SATC" (that "Girls" intentionally lacks), which encouraged the show's audience members to imagine themselves as that which they are not.

In the past couple of weeks, I have had more conversations about “Girls” than just about anything else. All of these discussions have included long dissections of what in the show feels real, not so real, realer and realest. (Realest and sweetest in a landslide: coming home late at night to find your best friend dancing around the apartment to Robyn and joining in.) “Girls” invites this sort of parsing. It is such an acutely observed series, grounded so deeply in a particular social milieu — post-collegiate life in New York City among kids who implicitly consider their job to be finding, and making, themselves — that, relative to most comedies, it plays like anthropology. Most sitcoms have had their specificity market tested out and their cultural affiliations scrubbed away. Not “Girls,” which has the atmospheric authenticity — the ill-fitting clothes, messy sheets, unimposing Brooklyn streets, throwaway observations that have been saved up for years, the late-night tweeting — we’ve come to associate with highbrow dramas or documentaries and the single-minded focus on a subculture usually relegated to lowbrow reality shows.

But “Girls” is much more than a filmed live journal entry. Yes, it's accurate and realistic, but what elevates the show and makes it great — makes it a show I would recommend to anyone, not just people who can identify with its subjects — is the extent to which it is also a broad, wonderfully crafted, laugh-out-loud television program. “Girls” has punch lines. “Girls” takes plausible observations, relationships and events and amps them up, a little past the point of plausibility, but keeps applying realistic dialogue and character motivation to make it go down believably. The much discussed dirty talk scene, in which Hannah’s not-quite boyfriend aggressively encourages her to take on the role of a tweenage prostitute, is the sort of horrifyingly icky and hilarious conversation that could probably only happen between two actors. A chat about the pros and cons of doggy-style sex ends with the goofy kicker, “Well, maybe a woman wants to feel like she has udders.” A provocative sexual come-on inspires one of the women to run off to the bathroom for a gonzo emergency masturbation session. This is not quite like life, but it all feels immensely lifelike.

“Girls” does have one glaring, inexcusable flaw: race. "Girls” is confoundingly white. There are hardly any people of color in the first three episodes, and the two that appear have short, perfunctory roles. (Hannah interns with an Asian girl who knows Photoshop; her gynecologist is not white.) This whiteness is not particularly realistic — this is New York City, and it's easy to imagine Hannah and her crew being more diverse, without sacrificing any verisimilitude — but if Dunham and her writers had made any mention of the whiteness at all, it could be understood as a loaded and knowing acknowledgment of the tendency to self-segregate. They don’t. (In fact, the one mention comes when Shoshanna tells Hannah about a TV show she is watching, and quotes Jerry Springer as saying an African-American woman spending $1,000 on her hair every month is "unbe-weave-able.") In the episodes I've seen, “Girls'” racial politics seem remedial, all that whiteness a reflection of obliviousness, not self-awareness.

This is in marked contrast to how "Girls" deals with class, another knotty issue for the show. “Girls” is about a group of economically privileged women with no college debt who, if worse comes to worst, can always move home. These lucky financial circumstances may be alienating to many Americans, and Dunham and her writers seem to have thought about this. Unlike Dunham's semi-autobiographical character in "Tiny Furniture," who lives with her parents in their giant Tribeca loft, Hannah has lost her income. Though "Girls" remains a show about the affluent, it at least seems aware of other financial realities and to have made an effort to appeal to people who are less well off than Dunham and her colleagues.

The same can't be said of race, and that's hugely disappointing, more disappointing than it would be in a lesser show. "Girls” is fairly explicitly about representation, about showing a group of women in a new, loving, plausible, generous, nuanced, weird, freaky and fundamentally serious way. The experience of watching "Girls" has been unexpectedly moving for me: I'm older than the main characters, but it has been powerful to watch a TV show that feels so much like it is actually about me and some of the people I know, and to have us treated with such a clear-eyed, occasionally skewering, but always respectful light touch. It's a rare pleasure, and it seems such a hideous misstep that "Girls" wouldn't be more inclusive of all the women, of whatever color, who could so easily have had that experience of it. “Girls” is too good to make a mistake this bad. Next season, may all of its most embarrassing errors be scripted.