The real war on moms 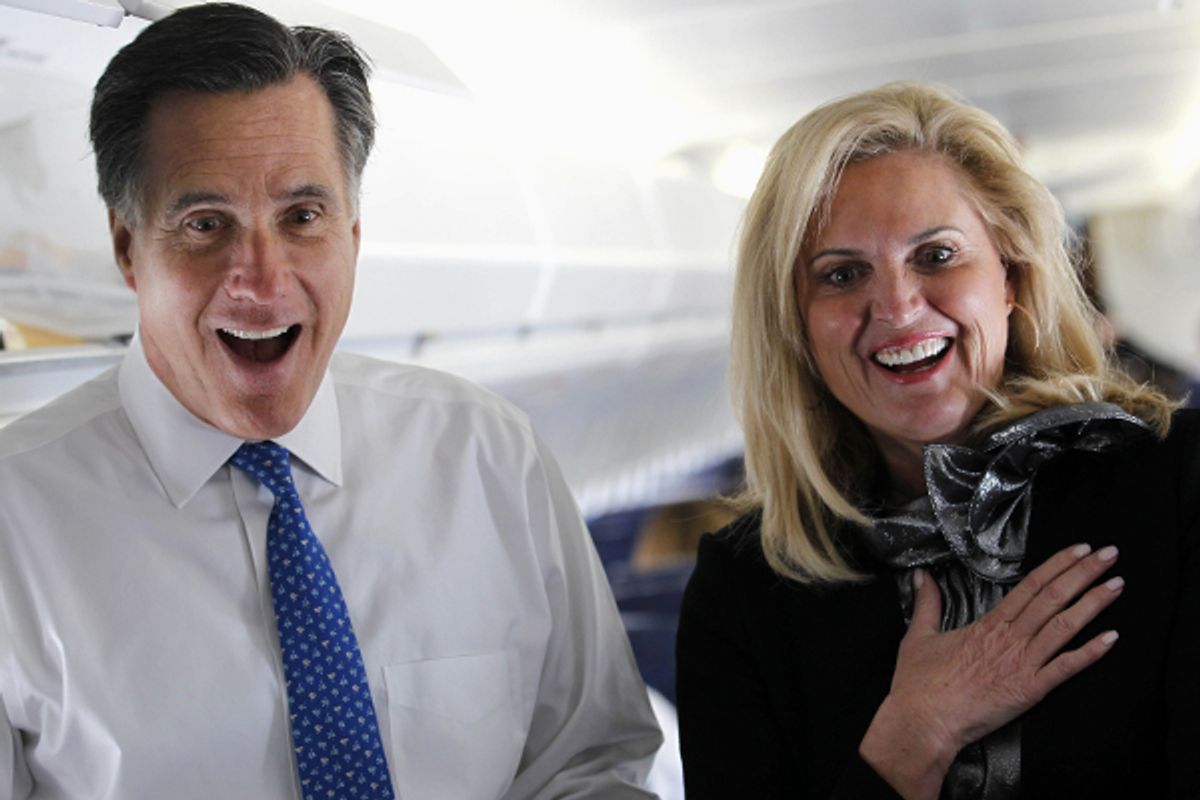 Welcome to the surreal phase of the campaign where Republicans, mindful of facing a gender gap – nay, a chasm – try to nominally out-feminist Democrats, but only insofar as it comes to respecting the right of a spectacularly wealthy woman to raise her children without a job outside the home (or, perhaps, to join an exclusive golf club). But make no mistake: This is not about the so-called Mommy Wars, where mothers with a paycheck sneer at the ones without one – a binary simply not reflected in women’s lived experience. It’s about class and about how government policy compounds its impact on households with kids.

The Romney campaign may not know what it’s getting into here, since this is where plenty of progressives live, which is how they had a bunch of substantive questions at the ready. "I will tell you that Mitt said to me more times than I can imagine, Ann, your job is more important than mine," Ann Romney said on Fox News today. But is this about nominal celebration or actually helping parents? If the Romneys “value women’s domestic work so much,” tweeted feminist author Jessica Valenti, “when will they discuss their plan for national paid parental leave?” And Slate’s Matt Yglesias wondered, “Do Mitt & Ann Romney think unemployed single moms have a full-time job? Do such moms deserve a living wage?” Or healthcare? You could almost fantasize for a minute that this campaign season jockeying of faux outrage is going to somehow lead to a substantive conversation about those oft-neglected policy issues, which force women and men into unhappy choices about how they’re both going to provide for and care for their families.

"Choice" was the word on Ann Romney’s lips in her Fox News appearance this morning. “We need to respect the choices that women make,” she said several times, adding, “Mitt respects women that make different choices.” "Choice," of course, is a word that represents in other contexts, like abortion rights, a negotiated truce on rights and liberties of women to live within and without their traditional roles. But Ann Romney’s use of it shows how limited it is as a trope: Is it a relevant “choice” for the vast majority of American women to decide whether to use their degree in French in the workforce or rationally rest on their husband’s millions to focus on five children – six, according to Ann, if you count mischievous Mitt?

The more pertinent “choice” involves a series of unappealing options when it comes to affordable childcare or workforce opportunities. According to the census, the proportion of mothers with a recent birth in the labor force increased during the recession, from 56 percent in 2006 to 61 percent in 2008. And another Census Bureau report suggests that most of the 5.6 million stay-at-home mothers, a minority among mothers, have little in common with Ann Romney. They tend to be younger, Latina and foreign-born – and they are less likely to have graduated from high school or attained a bachelor’s degree. These women face markedly different circumstances from the more publicly visible stakeholders in alleged Mommy Wars, the ones who opted out of the workforce and who have the ear of people making movies and writing novels, but the women with the luxury to live on a single income at their expected standard of living are a statistical and demographic blip. The bulk of stay-at-home moms have characteristics that correlate to lower earnings in the workforce, and for them, with the high cost and inaccessibility of childcare, the “free” childcare offered by staying at home is also a rational economic choice.

Did these women feel acknowledged when ultra-wealthy Ann Romney said on Fox News, “I know what it’s like to struggle,” if they heard her say it at all? The Romney campaign is counting on the fact that such women, and maybe other women who have felt the tug between home and the workplace, will be more moved by the unfortunate phrase “never worked a day in her life” than by the fact that the Republican Party’s policies disproportionately impact these lower-income mothers, from their access to reproductive healthcare to cutting the public-sector jobs that tend to be held by women. They hope that Obama will effectively be blamed for structural job losses to women, without being able to point to a single Democratic policy that drove it, even as women are supposed to be mad that an alleged Obama surrogate only values employment outside the home.

All of this started because Mitt Romney said that he knew what women care about because his wife had told him: "She reports to me regularly that the issue women care about most is the economy, and getting good jobs for their kids and for themselves," he said last week. Apparently, he is unable to speak to these alien creatures himself, or to understand that women’s interest in the economy includes how to balance their economic responsibilities with their family ones – since the latter still disproportionately falls on women – or how controlling their fertility is an economic issue. But maybe there’s a policy prescription that’s to augment the elaborate umbrage at the alleged disrespect to Ann Romney and women everywhere. Let’s hear it.