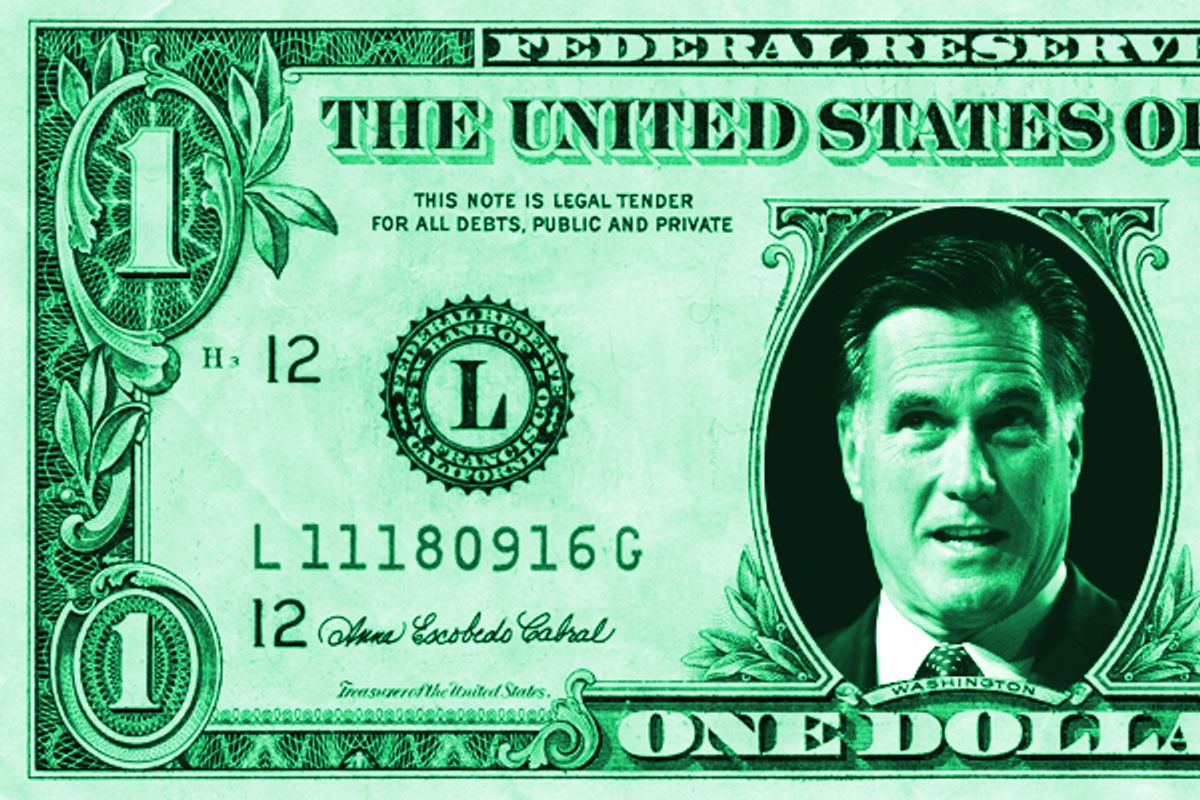 The political operatives running Restore Our Future, presidential candidate Mitt Romney’s deep-pocketed super PAC, probably didn’t know it, but Aug. 10, 2011, was something of a historic date for their organization. On that day, eight months after receiving its first recorded donation, and well on its way to raising $20 million, Restore Our Future received a gift of $25 from a Reno-based investor — what appears to be the first time that Mitt Romney’s super PAC had ever received a donation of less than $1,000.

Seeing as how its main function is to cut checks for hundreds of thousands of dollars in advertising — and how the whole ethos of the super PAC, down to its very name, is of and for the mega-donor — that Restore Our Future would get so small a gift in the first place seems a little insane. After all, the super PAC receives 97 percent of its donations in amounts of $25,000 or more, according to an analysis by the New York Times. Yet in the remaining months of 2011, eight additional donors would make small donations while scads more wrote out five-, six- and seven-figure checks. Already this year, there are a few dozen more.

So who are these enterprising micro-donors, who gave $50, $25, even $10 to a $43 million super PAC? I called a few, and as it turns out, wealthy Romney supporters aren’t the only ones drawn by the promise of unbridled spending. But nor were they all Romney superfans. Rather, the small donors to big money fall somewhere in the middle — like the big guns, they’re willing to do what it takes to oust Barack Obama from the White House. Like the rank-and-file of modest means, they’re not all sure that Romney is tough enough to do it.

Take Nancy Moening, a retiree in Florida who gave Restore Our Future $25 in January. Moening said that she is not so much pro-Romney as she is anti-Obama, and she was glad to give to a group that will blanket the airwaves with an anti-Obama message. Moening couldn’t recall exactly what prompted her to donate, but she was positive it was a news item about the president that would have fired her up — it couldn’t have been something Romney did, she explained.

Barbara Pope, a Georgia realtor who gave Restore Our Future $75, chose Romney’s super PAC over his campaign because she fears Romney is not the hard-sell type of candidate. “That’s not his m.o. He has incredible strengths but he won’t be the one to sound the horn.” Then there’s the fact that Romney’s campaign can’t coordinate with the super PAC — if they can’t commingle money or messaging, she reasons, both arms of the Romney effort need her support. She repeats this a few times for emphasis.

“Restore Our Future has more flexibility in what they do. They can basically do anything they want and they can do more with the money they have,” said one Colorado donor, who gave $250 and did not want me to use his name. “It’s good to be the bad guy.”

Others were less impassioned. David Sneed, a North Carolina resident and registered Democrat, likes the fact that Restore Our Future’s ads showed a “clear contrast” between Romney and his GOP competitors. He gave $25 to the cause. Another donor, film location scout Ryan M. Place, didn’t even seem to like Romney all that much. He just liked being a part of the process. “[Restore Our Future] has spent over $40 [million] so far on the vain statesman and scandal-free, whitebread, Harvard-grad, private equity enthusiast,” Place wrote in an email. So Place spent $25, to finance “Mitty the Unmittenable Mitten Romney via Restore Our Future,” as he put it. “His campaign certainly doesn't need my money but it makes me feel good to donate.”

There was lots of hedging — a few donors weren’t sure who was spending more strategically, Romney’s campaign or his super PAC, and so they doubled down just to be on the safe side. There was one disillusioned Newt Gingrich fan who wanted to fund the effort to muddy the former speaker’s name. (To my disappointment, I was unable to reach the Massachusetts donor and possible Ron Paul convert who gave $17.76). There were many euphemisms for negative advertising, and explanations as to why these ads were a necessary evil to the race. Really, the one thing that they pretty much did all have in common was their utter confusion as to what made me so curious about small donors to super PACs in the first place. As Moening put it, not a little dismissively, “I don’t know why that’d be interesting.”

When asked whether it felt a little strange to give to an organization so clearly meant for super-donors, most of them took this as a challenge to the legal right to unlimited giving.

“I don’t have any disdain for people who’ve had the benefit of capitalism,” said Pope (sounding, more so than at any other point in our conversation, like a true Romney fan). Added another donor, “It doesn’t bother me how much money someone gives. That’s their right.” Still another had never thought about it — and didn’t see why I would have.

Others didn’t think much of the disparity.

“That’s kind of how I feel donating in general, because I’m not contributing some astronomical amount,” Justin Copeland, a legal assistant who gave $25, said. “But every little bit helps.” Sneed felt the same. He knew that most donors to Restore Our Future gave up to millions at a time. “But I also knew that if people give more small contributions, it’ll make an impact,” he said.

Refreshing an approach to political giving as this is, it’s unclear whether that’s true in practice. Every little bit certainly helps the Romney campaign, which buys line items like plane tickets, mouse pads and pencil cups. For them, $5 still has some buying power compared with the maximum donation of $2,500. But $5 to Restore Our Future, compared with the $3 million Bob Perry gave on a single day in February — or even the relatively modest $250,000 checks from Bain Capital executives — not so much.

For me, chatting at length with Restore Our Future’s small super-donors caused me to reevaluate the notion of the small donor entirely. I was on the fence, for instance, about contacting Gary Chartrand, a marketing group executive who’d given $260.01. That’s far from an astronomical donation, but it’s a little more than the minimum amount that would be publicly reported by the FEC, had he given to Romney’s campaign. In that case, my dilemma was solved when I realized that his gift of $260.01 actually brought his total Restore Our Future giving to a healthy $50,260.01 — but, all things being equal, that is still “small” in the super PAC world.

Then there was John Atherton, who’d given $500 to Restore Our Future. Atherton, an affable Poughkeepsie, N.Y., retiree, explained that he’d made a donation to Restore Our Future after he’d maxed out with the Romney campaign. That brings his total giving to $3,000. “So I wouldn’t call myself a small donor,” he told me.

Maybe not. But if I were just glancing at Restore Our Future’s latest receipts — where Atherton’s $500 contribution is nestled between the Apollo Group, $75,000, and Rod Aycox, $100,000 — you could have fooled me.

Molly Redden is a reporter-researcher at The New Republic.