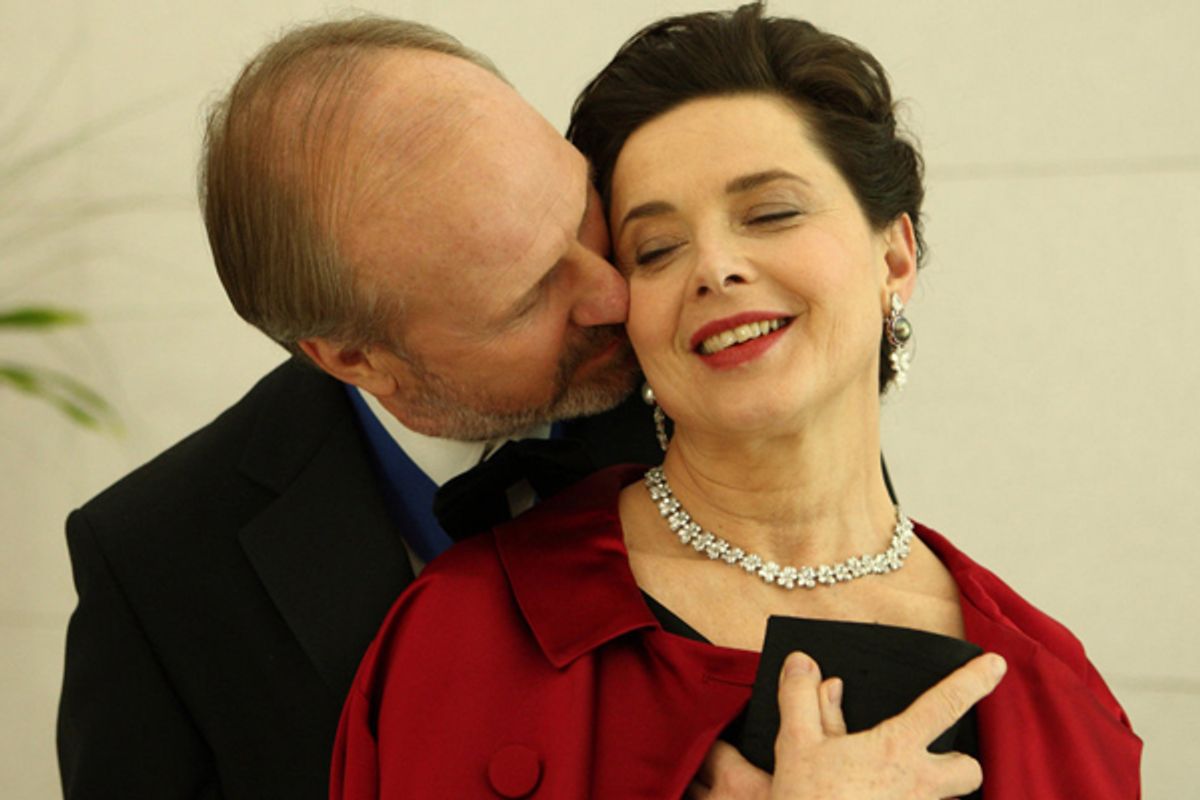 One of the oldest and most reliable truisms in show business holds that older people -- or people of any age -- will watch a love story about young people, but younger people will rarely or never watch a love story about old people. In other words, Shakespeare knew what he was doing in making Romeo and Juliet teenagers. (Among other things, he was accessing a tradition of doomed youthful romance that goes back at least as far as the Greeks.) I imagine this still holds true as a general rule. Certainly the principal audience for Julie Gavras' comedy "Late Bloomers," which stars Isabella Rossellini and William Hurt as a 60-ish London couple facing a series of marital and personal crises, is not going to overlap much with that of "The Hunger Games."

But Hollywood's ingrained tendency to ignore people over 50 or so -- with occasional, ultra-weepy exceptions, in the vein of "Cocoon" or "On Golden Pond" -- runs counter to various cultural and demographic realities, both absolute and relative. On one hand, the population is growing older, on average, in the United States and most other Western countries. On the other hand, accepted modes of behavior for older people are shifting. "Late Bloomers" is an entertaining diversion, mostly because Rossellini and Hurt are a pair of seasoned and graceful pros who know how to work every line and every gesture, and it's great to see them playing characters who are exactly their age. (In real life, Hurt is 62 and Rossellini 59.) But in a certain way the movie feels pretty old-fashioned: I'm not sure the social prejudices Gavras tries to mine for laughs here quite exist anymore.

Hurt's character, Adam, is supposed to be a prestigious architect nearing retirement age who startles his Italian-born wife, Mary (Rossellini), and colleagues when he starts wearing a leather jacket and jeans to work and going out drinking with much younger colleagues. But for better or worse, the real-world workplace is full of such guys, and I don't think younger people these days are alarmed to encounter elders who decline to play canasta or don sky-blue golf slacks. Arguably, the trend toward permanently emulating youth is just as ridiculous, in its own way, as is retiring to Scottsdale the moment the Social Security checks start to arrive. But that's just a function of each generation's inborn right to make fun of the one that's slightly older than it.

If anything, it's Mary who seems like the oddball in "Late Bloomers." Based on one episode of memory loss, possibly caused by stress or depression, she concludes that both she and Adam are entering a steep downward spiral and starts outfitting their house with bathtub grab-bars, giant-button telephones and other old-people gadgetry. She also gets involved, more intriguingly, with a Grey Panthers group who lobby Adam to build a "transgenerational eco-community" retirement home, one so attractive that it will make "younger people look forward to getting old." One wishes that Gavras (who is the daughter, by the way, of eminent Greco-French filmmaker Costa-Gavras) had developed this aspect of the story a little further. There are relatively few films about retirement homes (major props here to Sarah Polley's "Away From Her") despite the fact -- or perhaps because of the fact -- that most of us will end up living in them at some stage.

As to the sexuality and romantic life of Adam and Mary, there are two things to say: First, that area isn't nearly the taboo it used to be either, as the last 15 years or so of Helen Mirren's career has demonstrated, and second, this is the movies, so don't look for glaring, naked realism. Isabella Rossellini remains one of the most beautiful women in the world, although she's clearly not young, and Hurt, while fully looking his age, still cuts a virile figure in his faux-youthful wardrobe. Gavras absolutely has her heart in the right place, and tries to make the point that age is no guarantor of wise behavior, and that people Adam and Mary's age are just as prone to lust, vanity, egotism and all-around poor decision-making as anyone else. She does, however, fall prey to the general tendency to depict golden-age sexuality as being just the same as younger people's, only with larger beds, more money and longer periods of time involved.

"Late Bloomers" is a modest Euro-indie with a modest potential audience, but I expect we'll see a coming boom in romantic yarns made by, for and about the aging boomer and post-boomer populations. Fox has big hopes, for instance, for "The Best Exotic Marigold Hotel," the forthcoming film from "Shakespeare in Love" director John Madden, which stars Judi Dench, Tom Wilkinson, Maggie Smith and Bill Nighy as a group of British seniors who relocate to India with so-called unexpected results (i.e., romance, renewal, rejuvenation, etc.). That film's box-office yield will be understood, no doubt, as a test of the showbiz truism I mentioned earlier: Is the 50-plus audience ready to come back to the theaters, and will some number of younger viewers play along?

I don't claim to know the answer to that, and I'm not sure it's an interesting or worthwhile question. I do know that movies crafted to pander to older viewers, when they're imagined as some kind of narrowly defined niche audience, are always less interesting than those -- like "Away From Her" or "The Straight Story" or "Harold and Maude" or "About Schmidt" -- that dare to imagine aging, with all its unavoidable problems, as a universal and essential element of the human tragicomedy. "Late Bloomers" isn't anywhere near that level, but at least it's trying.

"Late Bloomers" is now playing at Cinema Village in New York, with other cities and DVD release to follow.