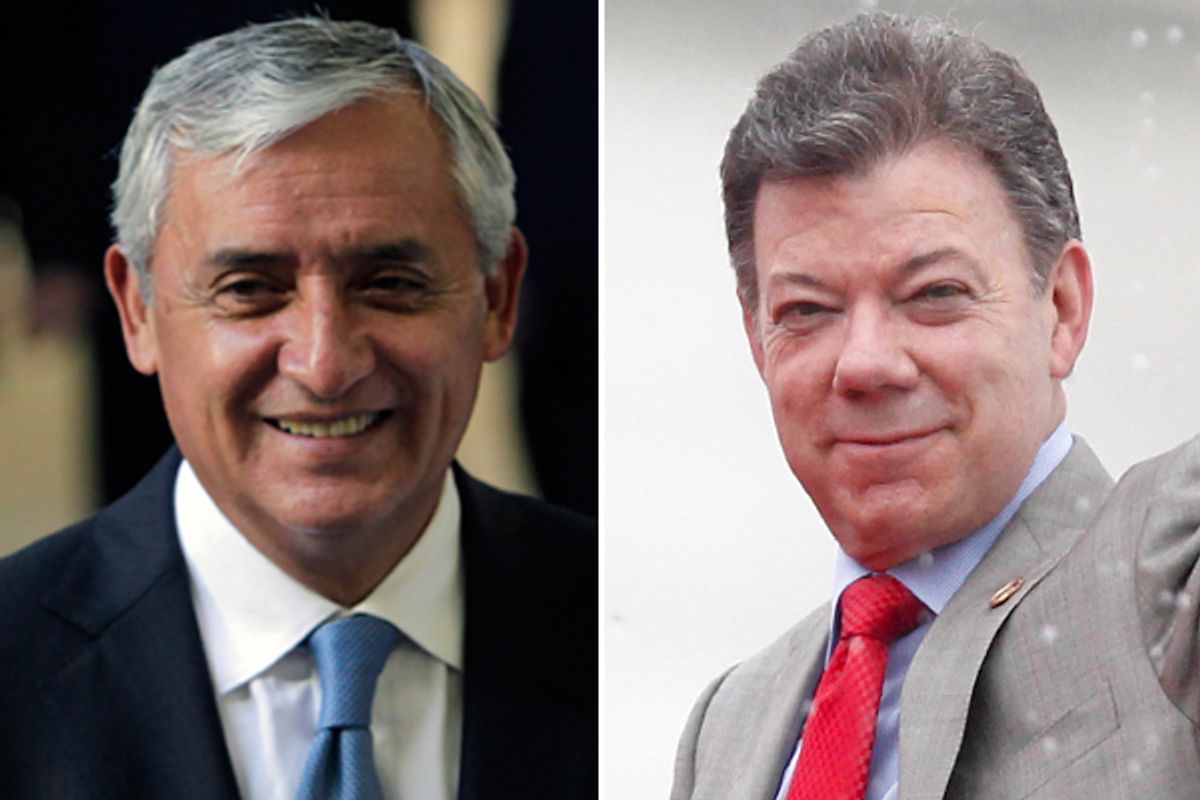 Ending drug prohibition is creeping into the U.S. political debate, thanks to a couple of Latin American military men. Oh sure, George Will's not-quite endorsement of legalization is noteworthy, but more than one erudite conservative columnist has gone further before. The views of three Latin American statesman are important but former U.S. Secretary of State George Shultz made the same case 23 years ago. The record high in public support for marijuana legalization found in a Gallup poll last year may be a factor, but the Obama administration has declared a "war on pot" since then.

It is the anti-prohibition campaign of Guatemalan President Otto Perez Molina and Colombian President Juan Manuel Santos, one a former general, the other a former defense minister, that has forced the Obama administration to engage critics respectfully for the first time. Perez will be pushing a formal proposal to open discussion of alternative policies at the summit of American heads of state that President Obama is attending, in Cartagena, Colombia this weekend.

While Obama doesn’t support decriminalization, said his advisor Dan Restrepo this week, "we welcome” the debate. “It’s worth discussing,” Vice President Biden told reporters in Central America last month, “but there’s no possibility the Obama-Biden administration will change its policy on legalization.”

So while there's no change of heart in Washington, there has been a change of tone. The Obama administration cannot afford to blow off the views of two staunch U.S. allies who have both waged drug wars in their countries, not at a time when public opinion in Latin America is increasingly disenchanted with the militarized approach.

Their approach is tactful. Santos says he doesn't want to change U.S. policy, but merely hear U.S. officials defend it.

“There are good arguments for legalizing, but I would prefer to reach that conclusion after an objective discussion,” Santos told the Washington Post this week. “The U.S. says, ‘We don’t support legalization, because the cost of legalization is higher than no legalization.’ But I want to see a discussion where both approaches are analyzed by experts to say, really, the cost is lower or not.”

In a piece for the Guardian, Perez called for an "intergovernmental dialogue based on a realistic approach – drug regulation. Drug consumption, production and trafficking should be subject to global regulations, which means that consumption and production should be legalized but within certain limits and conditions … Legalization therefore does not mean liberalization without controls."

Perez and Santos may not make headlines in Cartagena this weekend. In an effort to lower expectations and avoid confrontation with Obama, Santos told reporters in Cartagena yesterday that drugs should not be the "center of discussion" at the summit. At the same time, he added, a review of drug policy was necessary and reflected the will of the "vast majority" of countries in attendance.

"We will not see any shift in policy," said Juan Carlos Hidalgo of the Cato Foundation, "but this is forcing Washington to engage and defend its position at high levels."

"In the public forum, ending prohibition will probably only get a brief discussion," predicted Ethan Nadelman of the Drug Policy Alliance. "Privately it will be much more vigorously discussed. The challenge for the United States will be how to blur the differences. This is the first time ever that the decriminalization and alternatives to prohibition have ever been on the agenda of a major gathering of heads of states."

Perez and Santos are still in the minority among Latin American presidents, most of whom say, at least publicly, that they oppose legalization. But the desire for alternatives to legalization and prohibition is widespread. In Mexico, President Felipe Calderon has followed the U.S. approach in declaring war on the cartels in 2006. Some 41,000 people have been killed in the last six years without reducing the supply of drugs or increasing the public's sense of safety.  Calderon has said legalization might be the only solution but with the Mexican presidential election approaching in July is not going to change his policy. After the election is a different story. The Mexican business community is increasingly supportive of legalization and regulation as the only solution to the country's appalling levels of violence.

As the calls for reconsideration of drug war have proliferated, the Obama administration sent Biden, Homeland Security Secretary Janet Napolitano, and Assistant Secretary of State for the Bureau of International Narcotics and Law Enforcement Affairs William Brownfield to Central America to argue for a prohibitionist policy.

"To send three top officials in a month shows that the administration is taking this seriously," said Hidalgo. "They don't want this debate to gain ground."

But the more the administration responds in Latin America, the more legitimate drug policy reform becomes at home.