Pick of the week: "The Cabin in the Woods" gives the tired teen-splatter formula an ingenious post-"Scream" twist 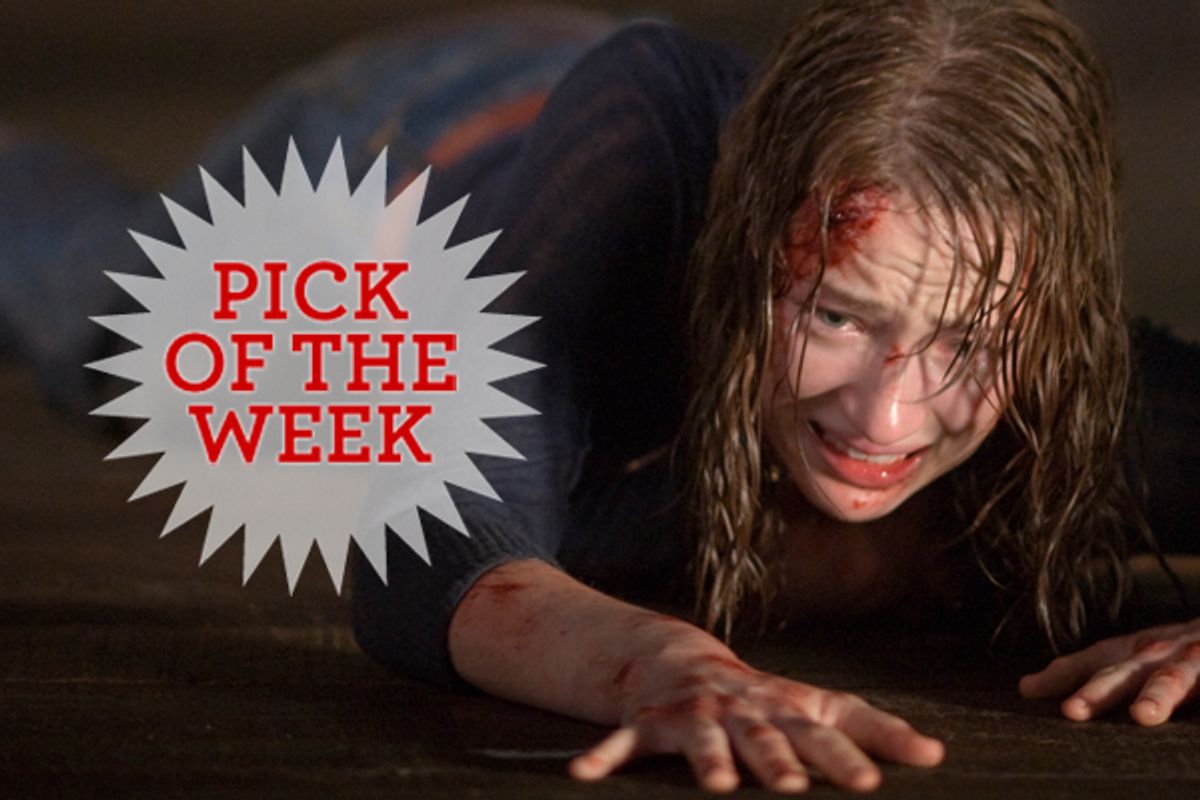 Kristen Connolly in "The Cabin in the Woods"
--

So here's the situation with Joss Whedon and Drew Goddard's mashed-up horror movie "The Cabin in the Woods": It's complicated. I'm recommending that you rush out and see it, but not altogether because I think it's so totally great and completely works. Quite a bit of it is great, and most of it works, and the stuff that clicks is outrageously entertaining and funny, sometimes with surprising depth. But I also want you to see it so we can argue about what works and what doesn't, and discuss the so-called surprise twist, which in-the-know, Whedonverse-type people will already completely have down but which I still shouldn't really talk about.

See, "Cabin in the Woods" is a self-knowing horror movie that is partly about a group of college students behaving like dumb-asses and unleashing unknown terrors at an isolated mountain retreat full of secrets, and partly about what it means to make that kind of movie and tell that kind of story. And if you're rolling your eyes right about now and saying, "Oh no, another damn movie that's too clever for its britches," well, that's OK too. Because Whedon (creator of "Buffy the Vampire Slayer" and "Firefly"), who produced and co-wrote the screenplay, and his longtime collaborator Goddard, who co-wrote and makes his directing debut here (after writing "Cloverfield"), have that angle covered.

Furthermore, if you're thinking that Whedon and Goddard's title sounds more like a category of movie than a specific movie, you're absolutely on the right track. You can probably guess who the characters are before I describe them: There's the studly athletic Curt (Chris Hemsworth of "Thor" fame), along with his borderline slutty girlfriend, Jules (Anna Hutchison), and you can be pretty sure what's going to happen to them, right? There's the reserved, bookish, decent Holden (Jesse Williams of TV's "Grey's Anatomy"), and the baked stoner Marty (Fran Kranz), who sees patterns and conspiracies everywhere he looks. Last but not least there's Dana (Kristen Connolly), the shy and awkward brunette who's being set up with Holden even though she's not sure she wants to be -- and if you've ever seen a horror movie in your life, you don't need me to explain her role.

But even before this quintet heads out into the wilderness for a little relaxation and invocation of demons -- even before they blithely ignore the crazy old guy at the rural gas station who warns them that if they drive up that durn road they won't be driving out again -- we can tell there's another level to this whole business. (I'm not crossing the spoiler line here, I promise.) In the very first scene of the movie, we see Richard Jenkins and Bradley Whitford (Josh Lyman from "The West Wing") playing a couple of wisecracking salarymen in shirts and ties, classic supporting characters from some workplace comedy. Except that their workplace appears to be some kind of panopticon command center, from which they can observe and even manipulate our five idiotic protagonists as they launch themselves into horror-movie hell.

Without getting into specifics, it's clear that Sitterson (Jenkins) and Hadley (Whitford) have seen this show before. They watch with the knowing, slightly bored gaze of aficionados, who feel pretty sure how things are going to end up but can't help getting a little bit invested in the story as it goes along. At one point, Hadley sighs (prophetically, as things turn out), "Yeah -- but I just think it would have been cooler with mermen." As more details about their workplace are revealed, they even conduct a vigorous betting pool on what exact fate will befall the five sacrificial lambs in that eponymous cabin. What is the nature of Sitterson and Hadley's investment and involvement? And what's the connection to various other horror-movie scenarios they can watch playing out around the world on their monitors? (I especially like the schoolgirl nightmare streaming live from Japan, which appears to combine "The Ring," "The Grudge" and a few other Asian delights.)

Well, that's the game, of course -- but it's a mistake to think of "Cabin in the Woods" as nothing more than a secret that's waiting to be revealed. Much of the fun, not to mention a whole lot of splatter, comes after the central premise has become clear, when the archetypal teen victims declare their independence, and begin to fight back against their narrative enslavement. Whedon's great strength (and occasionally his great weakness) is that he identifies so strongly with his fans, and "Cabin" is loaded with all sorts of references and in-jokes for horror buffs, beginning of course with the "Evil Dead" series but proceeding through a full range of the gruesome, the gothic and the grotesque. I honestly believe that I could tell you right now exactly what influences he and Goddard have combined in this script, and it wouldn't "ruin" your experience or any such thing. But that's a discussion for another time, and no, I'm not going to do it.

For a mid-budget production, the effects in "Cabin in the Woods" get pretty delirious, as the universes of the trapped teens and bored functionaries collide with disastrous consequences. Goddard's direction strikes me as capable, direct and not especially showy, which is a pretty strong endorsement for a movie as high-concept as this one is. (He has the aid of veteran cinematographer Peter Deming, who shot "Drag Me to Hell," "Evil Dead II," "Mulholland Drive" and three of the four "Scream" films.) The cast are all game for their archetypal parts, especially Jenkins, Whitford and Fran Kranz as the indomitable pothead who figures out that things are not always what they seem, man. Other credited parts include the Werewolf Wrangler, the Dismemberment Goblins, and Fornicus, the Lord of Bondage and Pain. And in the end, Hadley is right: It is cooler with mermen.

"The Cabin in the Woods" is now playing nationwide.