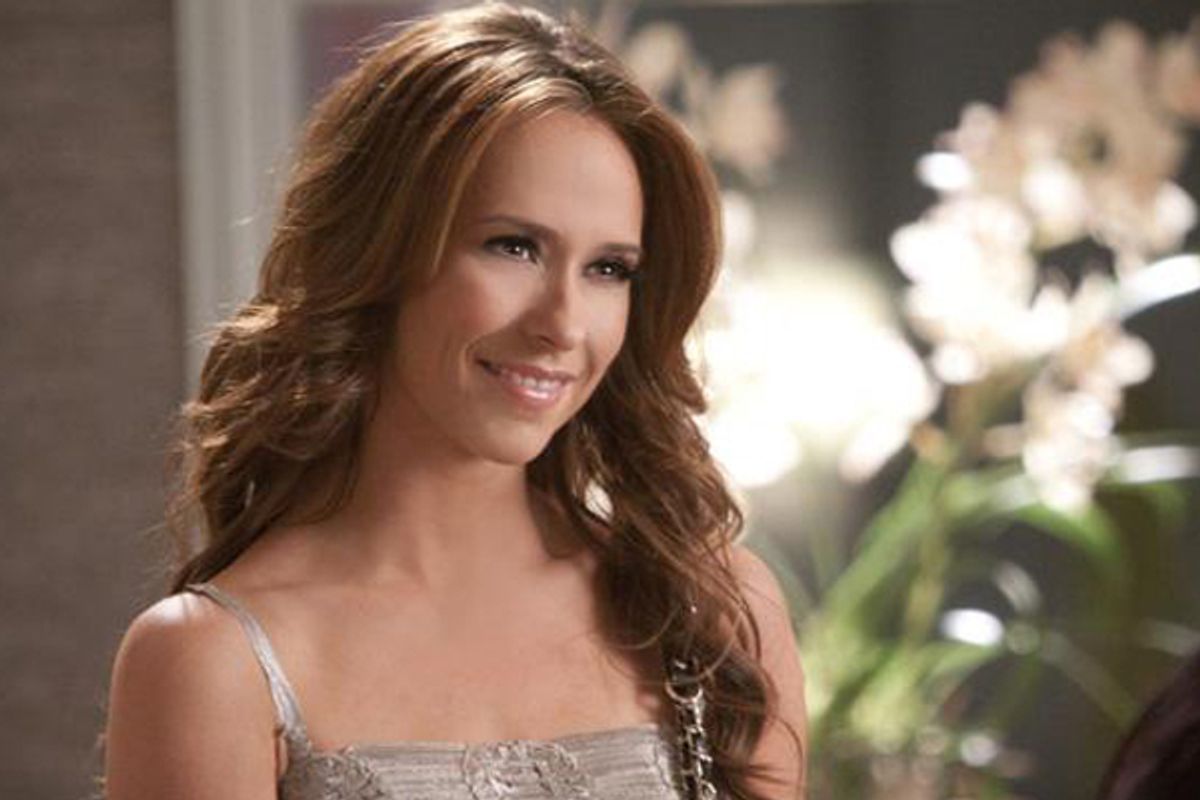 A little over a year ago, Jennifer Love Hewitt starred in a Lifetime movie called ‘The Client List,” about a good Texan woman who starts giving happy endings at a massage parlor to support her family. The movie was exactly what one hopes for in a Lifetime film: melodramatic, campy, ridiculous. In addition to the basic premise, Hewitt’s character developed a coke problem and eventually turned her entire client list into the police.

As of last week, this movie was turned into a TV show that airs on Sunday nights, with Hewitt once again playing a good Texan woman who starts giving happy endings at a massage parlor to support her family. Not since “The Best Little Whore House in Texas” has prostitution seemed like such an innocent, harmless, good-time profession. The show is ludicrous, nonsensical, dopey and pretty fun -- so, basically the perfect sort of TV show to be airing on Lifetime, an environment in which getting worked up about a show’s fantastic, preposterous sexual politics is to humorlessly miss the point.

Love Hewitt plays Riley, a married mother of two and masseuse who takes a job at a spa in the city of Sugar Land, Texas, to help her unemployed husband with the pressing mortgage. Her first day on the job, she is horrified when a well-muscled client explains that he would like an “extra,” and spends the next few weeks trying to make enough money without selling sex. Then her husband leaves her— but not before they do it on the kitchen table while the children and her mother (Cybill Shepherd!) are in the yard right outside — and Riley puts aside her moral objections in order to care for her children.

Did you know that the people who come in for regular massages are rude women who listen to their iPods, men with hair all over their backs and sneezing guys with bad colds, while the men who pay for hand jobs are young, have six-pack abs and no body hair whatsoever? Also, did you know that most men paying for handies really just want to talk and be listened to, maybe while being gently caressed? Well, thanks to “The Client List,” now you do! As soon as Riley gives up regular massages, her clientele gets both seriously hunky and seriously emo, and start giving her generous enough tips to help pay that mortgage.

Sure, there are downsides to Riley’s new gig. An angry woman writes "Whore" on the side of Riley’s car and she and her pimp — oh, excuse me, the very nice, conscientious, maternal single mother who runs the spa — can’t scrub it off. But when the wife (played by Mimi Rogers!) shows up at Riley’s house, Riley can honestly swear that all she’s been doing with the woman’s husband is delivering the talking cure. Because she’s been listening so hard, she even helps the pair save their marriage.

It’s all going to get a lot more complicated for Riley, especially when she starts sleeping with her husband’s brother, an eventuality telegraphed in the first episode, but it’s probably never going to get that serious. The Lifetime movie, of which this serialized “The Client List” is just to be an extended version, may be the most self-aware format in all of television. By putting such campy high-gloss on sex work, it’s not trying to pull a fast one on its audience ("Did you know, prostitution is really fun???"), it’s just trying to give it what it wants. Just as Riley doesn’t want to remind her johns of the sordid side of her business, Lifetime doesn’t want to remind its audience either — at least not until things get so completely sordid that Riley's blown all her money on coke, lost the house and her kids, and hit rock bottom, which is a whole other kind of Lifetime movie good time.