Our awkward talks about God

At 13, Lizzie is finding her faith. How do I tell her I don\'t believe without influencing what she does? 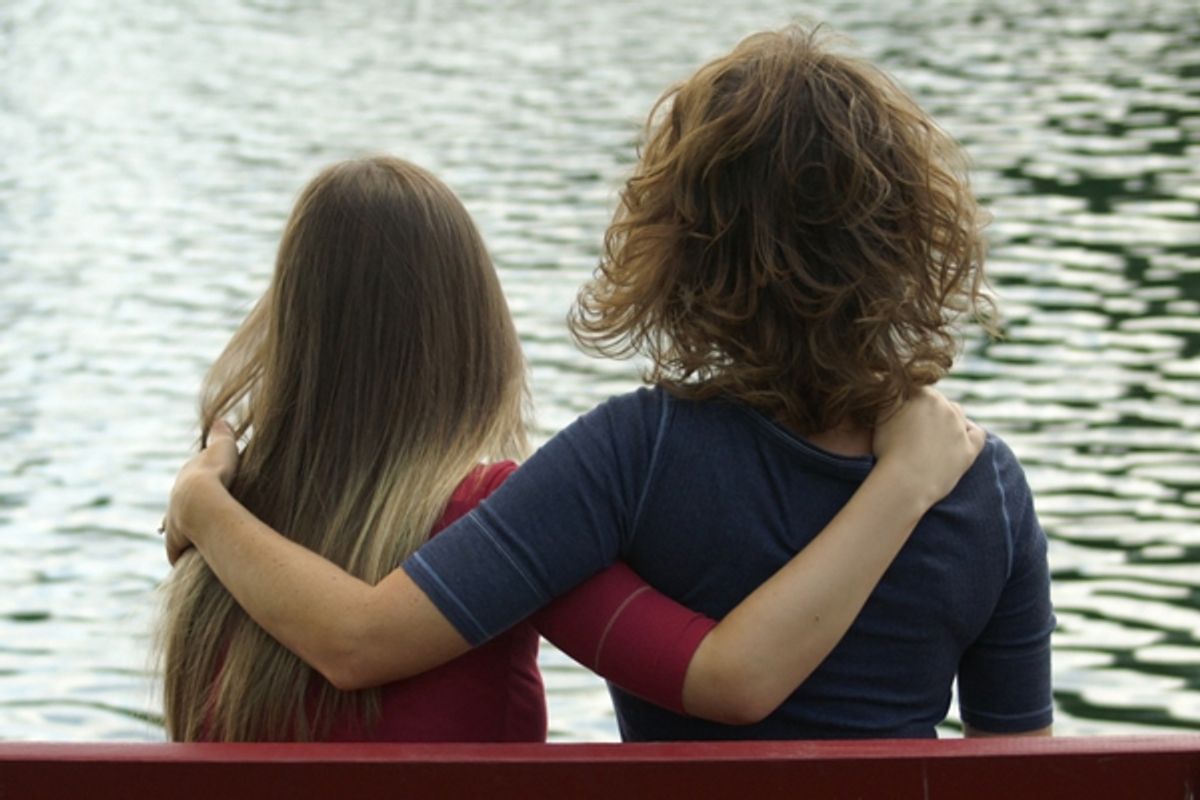 “I’ll make a peanut butter and matzoh sandwich since I can’t have bread,” Lizzie said, grabbing a knife from the drawer. My daughter, at 13, has decided she’s a little Jewish. Her ancestors, Irish Catholics, are as Jewish as I am, but the only dad she’s ever really known, who came into our lives when she was 4, is a nonreligious Jew. And, as an agnostic ex-Catholic married to him, I don’t mind at all that Lizzie is experimenting with religion. But I do hope it's non habit-forming.

Lizzie has been trying on bits and pieces of religions for years now, discarding each after a little wear. A few years ago, as we read the decidedly secular Nancy Drew together one night, she asked out of the blue if I believed in God. As she snuggled into the crook of my arm, chewing on a strand of dark blond hair, she waited for an answer.

“Well, some people believe in God,” I answered, carefully putting on the same serious but accessible voice I’d used to answer previous uncomfortable questions about where babies come from and why there are Republicans.

“Do you believe?” Lizzie said, stressing the you so I could almost see the italics flying out of her mouth. There was no getting around it. I had to answer.

“No, I don’t,” I said as concern creased her face.

Should I have lied and just said I believed? After all, God seems to lurk in almost every nook and cranny of this country. Way back, in kindergarten, the Pledge of Allegiance told her she’s part of one nation under God. Lizzie sees friends and family go to church or temple each week and smiles at the store clerk who tells her to “have a blessed day.” Giant decorated trees and huge menorahs are everywhere she looks each December (rather, menorahs used to be everywhere -- then we moved to Portland). Every time I dig through my wallet to find bills to buy a gallon of milk -- or anything at all -- I see His name. In God some may trust, but not all of us.

There are chunks of society saying if you don’t believe in God you’re a bad person. Will Lizzie intuit that she’s bad if she doesn’t believe -- or that her mother is? Or is it OK to tell her what I believe: It’s a superstition that many people believe but I don’t, and that, to me, it seems like mystical make-believe. Maybe I should take what I like about religion -- the moral and ethical bits -- and drop the rest, my own personal ecumenical smorgasbord. I’ll take One Golden Rule and seven of the Ten Commandments, please, and hold the mortal sin and transubstantiation.

My disenchantment with religion started long ago, when I went to Mass each Sunday. I wore frilly dresses that my mother had carefully laid out the night before and the white acrylic tights that itched my legs and sagged uncomfortably as I sat, week after week, on the polished dark wood pew, standing and sitting on command, but not really listening to the priest. I chanted when everyone else did -- my religion, with its comfort of ritual and repetition, seemed made for obsessive compulsives. But instead of mediating on God’s glory, I’d flip though the hymnal and wiggle on the hard wooden seat. After my First Communion, I’d go each week and eat Jesus, in Catholicism’s ritualistic cannibalism. As the wafer dissolved slowly on my tongue, I realized that to me it was just a wafer. The church didn’t fill me with the Holy Ghost, just the feeling it was a scam. There wasn’t one single event that made me feel this way -- just a series of Sundays and something deep in me. I was a closeted agnostic at 6. But I kept going. When I was a teenager, I’d sullenly attend each Sunday morning, studying the other teenagers, potheads and cheerleaders. A cheerleader who, at school, strutted past with a flip of her feathered hair as if I didn’t exist, smirked a fake lip-glossed smile at me and shook hands when the priest told us to offer each other a sign of peace. As soon as Mass was over, the detente ended and everyone went back to their roles, the weekly pretend play over. I smoked dope with the potheads, and cheerleaders ignored lesser girls.

High school also taught me how malleable faith could be -- religious beliefs seemed as steadfast and unbendable as tin foil. After losing my religion as a teen, I lost my virginity and got pregnant. My parents, avowed Catholics, took me to the clinic for an abortion without a second thought. We didn’t even consider any other alternative for more than 20 seconds -- and thanks be to my parents for that. But it crystallized the feeling that religion was full of hypocrisies -- and you could twist it and turn it to fit your needs. I still went to church, though, with my parents weekly. I didn’t ask them not to go and they didn’t tell me to go; it was expected that I go, so I did. And as soon as I left home, I left my religion without a second glance. During my 20s and 30s, I gave as much thought to religion as I did to my 401K -- pretty much nothing. But in my mid-40s, I found myself back in church for the first time in decades.

My 40-year-old cousin and her two young children had been killed. There aren’t words to explain the awfulness of what happened, but here are a few to describe it: It was late. It was dark. My cousin was driving with her two kids tucked safely into their car seats. Something happened and the car hit a tree. It burst into flames. Everyone died.

Red electric candles flickered in the corners and incense burned my nose and eyes. Flowers and tiny white coffins were wheeled into the church and placed next to the larger coffin -- children snuggled next to their mother in death, as in life. All around, mourners sobbed. My cousin’s husband was lost to his grief, his entire family gone in less time than it takes to say three Hail Marys. What can you say to someone drowning in misery, how can anything you say possibly make it better? You can’t.

The priest’s words, meant as comfort to the family, fell flat to me. Everything seemed like a false comfort offered for such bottomless loss. Part of me wants to be able to tell Lizzie her second cousins are in a better place, to buffer her from the sadness of children dying. But it feels like a lie. So what do I say when other people tell her they're in heaven? Do I stare straight ahead when she looks quizzically at me? What’s wrong with a white lie to help ease grief? I fight the urge to answer like a therapist. (“Are my second cousins in heaven?” “What do you think?”)

I feel comfortable with what I believe about not believing, but I still find it hard to talk to Lizzie about it. I want to give her the wisdom I have but also the room to decide for herself and not have her beliefs trailer-hitched to mine. So we read my old children’s Bible, Greek myths and Native American creation stories. Her dad tells her the story about the Maccabees and the oil when we eat latkes at Hanukkah and about Moses at Passover. I tell her about Jesus during Christmas and Easter. But I feel compelled to stress to her that these are myths that some people believe. And is it hypocritical on my part to even talk about Moses and Jesus? To have a tree? To search for eggs? To eat latkes?

Lizzie is sifting and sorting and exploring theology in her own way. She and her dad started their own religion, Dalala, after her fish Sparkly died. It involves lighting a candle for all the people or animals who’ve died in the past year -- so they can come back as babies. And it involves eating pancakes. We’ve observed it annually, every March 26, for seven years now. It sounds as plausible as anything I grew up with.

So Lizzie has the room to believe what she wants. I taught her to brush her teeth, to look both ways before crossing the street and to think about religion from a historical standpoint. She’s a kind and thoughtful child, a living Golden Rule. And if she one day decides to get religion, I’ll love her and forgive her.