His wife's "job" is "more important" than his, but he'd make welfare moms work "from day one if we could" 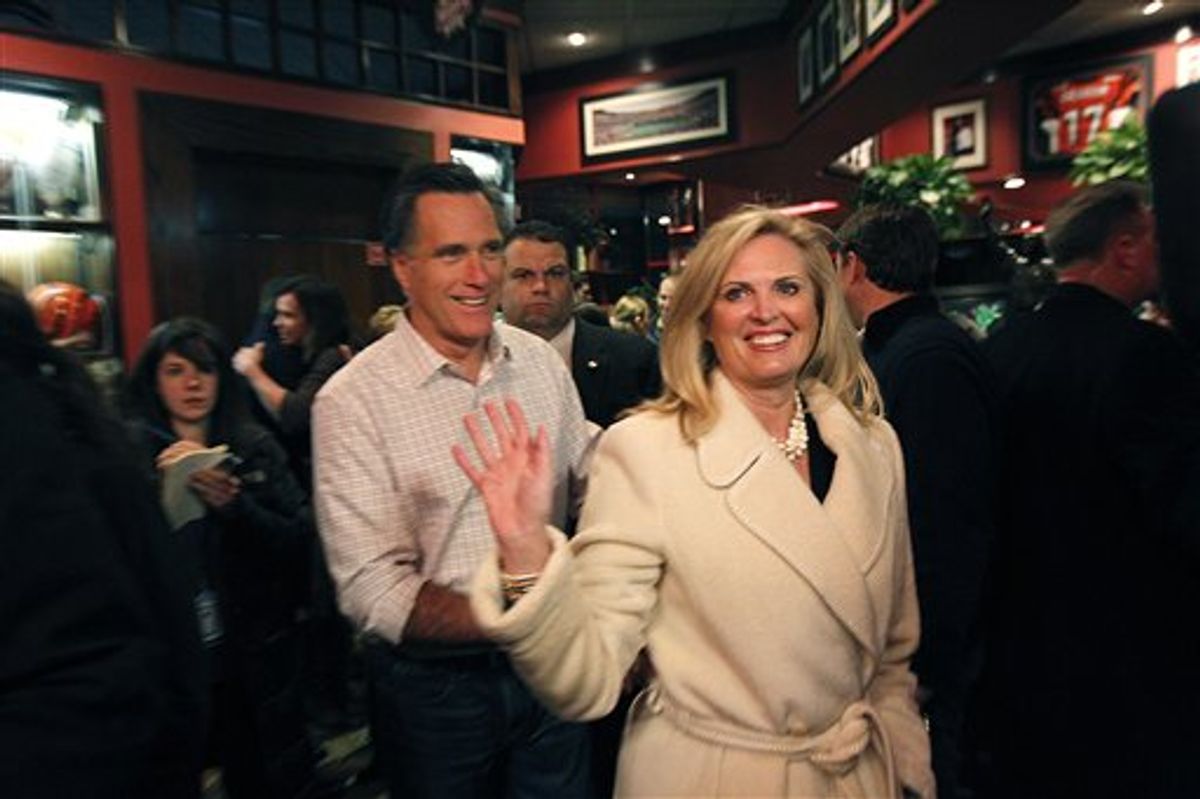 With his presidential campaign manufacturing outrage over Hillary Rosen's remark that Ann Romney had "never worked a day in her life," the folks at MSNBC's "Up with Chris" unearthed some great quotes illustrating Mitt Romney's old-time double-talk.

"I happen to believe that all moms are working moms," he harrumphed to the National Rifle Association on Friday, in response to the Rosen mess. But earlier this year in New Hampshire, Romney said he'd like to toughen our already strict federal welfare rules to send mothers into the workforce as soon as possible.

"I wanted to increase the work requirement," Romney said in January. "I said, for instance, that even if you have a child two years of age, you need to go to work. And people said, ‘Well that's heartless,' and I said ‘No, no, I'm willing to spend more giving daycare to allow those parents to go back to work. It'll cost the state more providing that daycare, but I want the individuals to have the dignity of work." (By backing the Ryan budget, by the way, Romney would also reduce or eliminate the funding for childcare that he claims to believe is essential.)

But wait: Ann Romney said her husband told her "more times than I can imagine, 'Ann, your job is more important than mine.'" Yet poor mothers need "the dignity of work?"

There are plenty of good reasons to help poor mothers into the workforce. For many women, welfare was an invaluable safety net they used to get back on their feet while raising children alone. For others, particularly in cut off low-income communities with few opportunities, it maintained women and their children in a grinding poverty and isolation that could become inter-generational.

Concern about a so-called “culture of dependency” led first Republicans and then Democrats to back work requirements for welfare recipients, initially for mothers without young children. But Republicans crusaded to make the rules  came to apply to women with infants. As Romney said in 1994, "we will do everything in our power to make sure that people who are on welfare have an opportunity and an obligation to go to work, not after two years but from day one if we could."

From Day One. Maybe a brief stop at a hospital to deliver the baby, and then back to work? The conservative Concerned Women for America said this week that motherhood is "the most important job there is." I wonder if they'll be chastising Romney for his anti-motherhood approach to poverty. Of course not.

Here's the segment from "Up with Chris:"