But is it Occupy?

As the movement ages, it's becoming harder and harder to determine which groups exactly belong to it 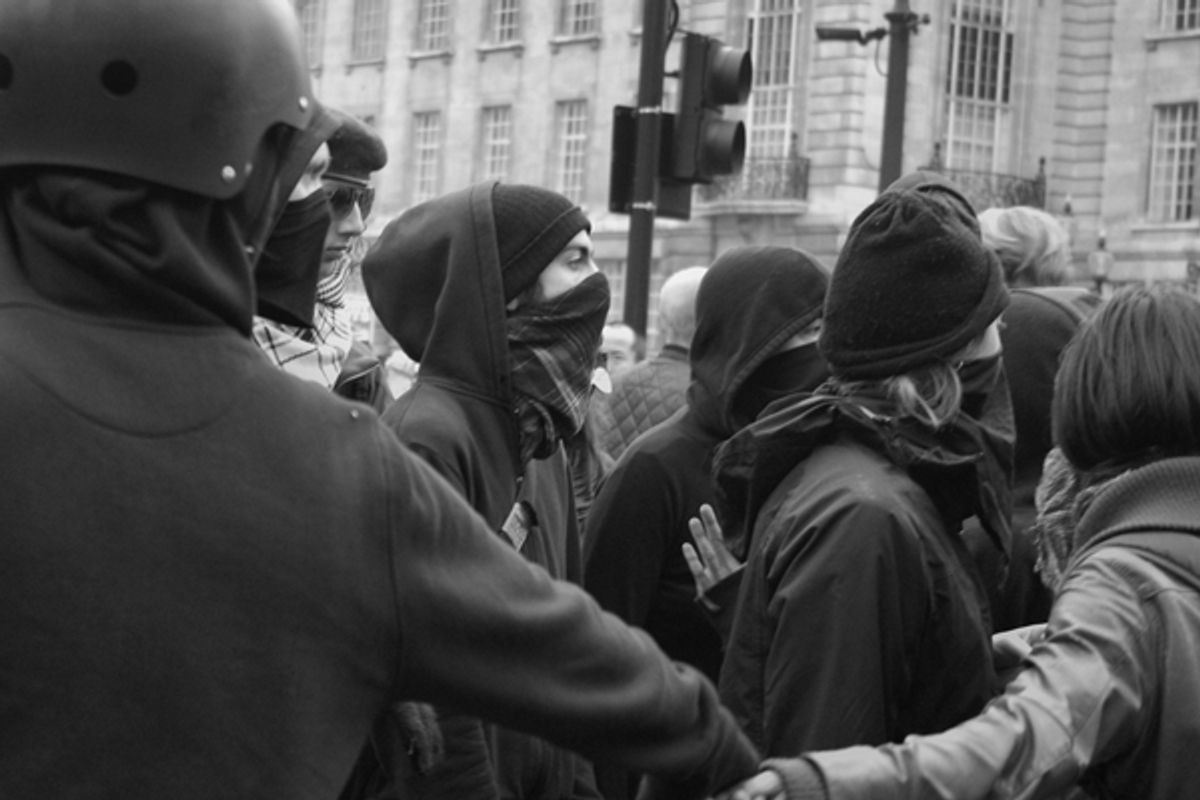 Updated with correction below.

I was reminded this weekend that it's still unclear what exactly Occupy Wall Street is -- or, more precisely, what does or does not count as part of "Occupy." Events in New York once again brought this to the fore for those organizing and agitating under the movement banner.

On Saturday, following the annual Anarchist Book Fair, a crowd gathered in New York City's Washington Square Park for an anti-police march. They took to the streets with numbers nearing 100 and little police accompaniment, at first. They wound through the East Village, leaving some minor property damage in their wake. By the end of the night, there had been three arrests, carrying hefty charges including assault on a police officer and inciting to riot.

I followed the march -- it was rowdy, energetic and fast. Barricades and trash cans were dragged into the street to stop traffic and impede the police cars that eventually arrived on the scene. At one point, two young women watching the surge of people winding through stalled traffic asked me whether this was an "Occupy thing." I answered "yes." But, as I soon appreciated, it's more complicated than that.

One of the arrestees -- Nicholas Thommen -- was held on bail and the issue came up as to whether the OWS bail fund (a $90,000 nest egg set aside for bailing out activists) should be tapped into. A number of people suggested that since no established OWS working group had announced the march, and since the action had not been publicized on any OWS website, the event was distinct from Occupy plans and thus ought not receive its funds. After a fair amount of back and forth, an individual who supports OWS posted Thommen's bail. Across Twitter and in numerous media reports, people asked whether the march was or was not Occupy. The Village Voice reported:

At first, reports brought up a possible link between the black bloc and Occupy, members of whom had already been attending major protests throughout the day and a march at Washington Square that started around 7pm. But the coincidence was soon found to be false.

The report is wrong on two counts: First, as has now been pointed out ad nauseam, the black bloc is a tactic -- not a group -- that involves march participants covering their faces and donning black hoodies and bandannas so that no one member is identifiable. Although some of Saturday's marchers covered their faces with bandannas, this didn't amount to the whole march employing black bloc tactics. Second, connections between the march and Occupy were anything but "coincidence."

Many long-term Occupy supporters were part of the march, which was planned autonomously and anonymously, and publicized on fliers given out by hand. Although it was not announced by any OWS website, it arose from decentralized organizing, which falls in line with the horizontalism underpinning the idea of Occupy. (Unlike, for example, the 99 Percent  Spring, which was developed by institutions like MoveOn that do not organize horizontally.)

A number of those involved in OWS will want to distance the Occupy name from anything involving property damage or black bloc tactics. To do so, however, would miss the importance of "Occupy" as a broad and confusing banner under which a diversity of tactics are supported -- namely that such decentralization can empower vast numbers of people across the country to plan and orchestrate actions on their own, but also in solidarity with the ideas and principles associated with Occupy (as we saw with the original spread of encampments); it would also miss the fact that many of the longest-term participants in Occupy are anarchists who appreciate the utility of black bloc tactics and reject the idea that damage to corporate property constitutes violence.

Last August, as general assemblies became a regular occurrence in New York's parks and squares, the plan of "Occupying Wall Street" on Sept. 17 served as an anchor point for organizing. The attendees wanted to form affinities, to plan actions, to spread information and agitate; the idea was never to form an organization with members. But as actions and encampments grabbed headlines and resonated across the world, it ostensibly made sense to ask whether an action or protest was or was not part of Occupy.

As Saturday's actions illustrated, there is no determinate answer to what is or isn't Occupy. There are procedures and principles broadly understood and developed that tend to characterize that which is part of the movement, but there is no membership, no central committee. There is an ongoing conversation about when funds donated to OWS should be used, and there will continue to be contentious cases. As groups mobilize in anticipation of the planned general strike on May 1 and protests in Chicago around the NATO summit in late May, the line between what is and is not Occupy will become unclearer still.

I would be saddened if energy went into trying to develop rules or qualifications to determine whether a group or action is "Occupy" or not. How bail funds should be raised and distributed will remain a difficult question in need of careful addressing. However, if Occupy participants have created something with sticking power, this spring we will no doubt see many more street marches like the one in New York last Saturday; the sort of actions that challenge assumptions about what is or is not Occupy, but perhaps point to a fabric of unrest related to, but broader than, the Occupy name.