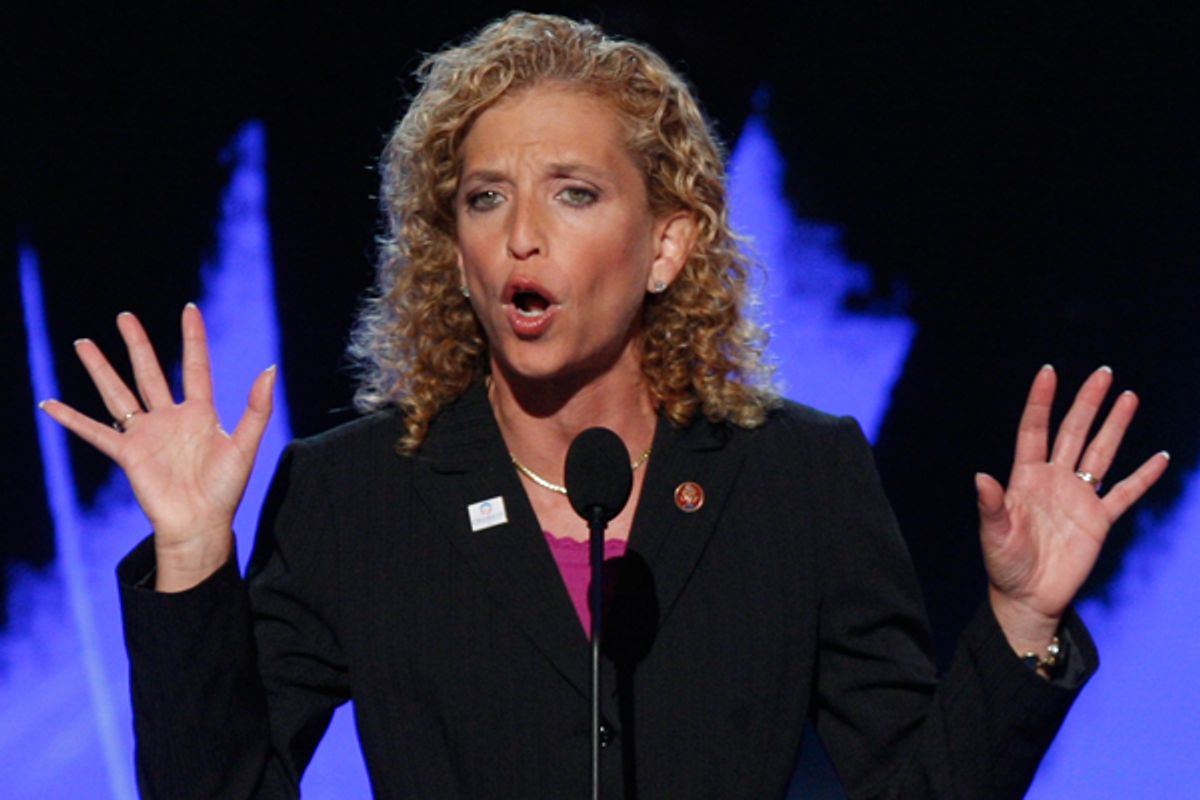 Liberals who admire the Democratic Party’s tradition of inclusiveness and civil rights should be troubled by what happened last week in Florida. Rep. Debbie Wasserman Schultz, who has served as the chairwoman of the Democratic National Committee since last April, was until then scheduled to speak Saturday at the annual dinner event of the nonprofit group Empowering Motivating Educating Resourceful Grassroots Entities, or EMERGE USA.

EMERGE is a grass-roots group that works primarily with South Asians, Arab Americans and Muslim Americans to empower young people to take part in community service projects, local government and other forms of civic leadership. “Our broad goals are to incorporate minorities generally, Muslim or non-Muslim, into the political system,” EMERGE board member Imran Siddiqui says. Whether it's running a get-out-the-vote drive or petitioning a city council to stop the construction of an industrial waste dump site next to a mosque, the group's activities are little different than those of any other classic grass-roots American organization – the only difference being that a large portion of EMERGE's members are from Muslim communities. Last year, former governor and U.S. Sen. Bob Graham, D-Fla., keynoted their event.

Yet Wasserman Schultz decided to abruptly pull out of speaking at EMERGE's annual dinner last week. “We never agreed to do a fundraiser, nor an event,” claimed Wasserman Schultz spokesman Jonathan Beeton. Yet EMERGE had previously widely advertised Wasserman Schultz's participation at the fundraising dinner without apparent complaint from the congresswoman's staff. “We were interfacing with congresswoman Wasserman Schultz’s people for about a year to try to get something together,” said Siddiqui. “So when she agreed to the banquet, we were elated.” There's a much more likely explanation for her abrupt refusal to attend the event than a simple miscommunication. For months, Islamophobic websites and a far-right congressional candidate waged a smear campaign against EMERGE, pressuring Wasserman Schultz to back out of the event. With her withdrawal, it appears that they won.

The smears can be traced back to an article in right-wing McCarthyist David Horowitz's Front Page Magazine. In a February article, Joe Kaufman – who is vying in a Republican primary to challenge Wasserman Schultz for her seat in Congress – teamed up with Militant Islam Monitor's Beila Rabinowitz to claim that EMERGE was part of a “nefarious agenda of placing Islamists into positions of American power and influence.”

Based on that absurd premise that the community service volunteers and voter registration gurus of EMERGE were out to install an Islamist government in the United States, the bulk of the article's allegations focused on Khurrum Wahid, one of the group's founders. Kaufman and Rabinowitz note that Wahid, a civil rights lawyer, represented individuals accused by the U.S. government of terrorism-related crimes. This line of attack was similar to one waged in 2010 against Department of Justice lawyers who represented detainees at Guantanamo Bay. The group Keep America Safe referred to these lawyers as the “Al Qaeda 7,” a charge so incendiary that even a former Bush official rebuked it, noting that “there is a long-standing and very honorable tradition of lawyers representing unpopular or even uncontroversial clients.”

But it's not surprising that Kaufman would engage in such outlandish smears. They help distract from his own past of espousing extreme ideas and outlandish rhetoric. Shortly after the Sept. 11 terrorist attacks, he endorsed using nuclear weapons against the Muslim world to retaliate, writing, “If the decimation of Hiroshima and Nagasaki was the right thing to do, in response to Pearl Harbor, then why the heck are we saving our nuclear weapons now?” He was even skewered by "The Daily Show" for his crusade to stop a Muslim Republican from getting the acceptance of the Broward County GOP. (Kaufman was at the time ironically leading a group called Americans Against Hate).

So how did a fringe congressional candidate, whose greatest feats have been getting mocked by "The Daily Show" and speaking out against Muslim Family Day at Six Flags on Fox News, cow one of the most powerful Democrats in the country? Unfortunately, he had some help running the smear campaign against EMERGE. His attacks were uncritically picked up by local news bloggers before making their way into larger right-wing publications. The Washington Free Beacon's Adam Kredo sensationally wrote an article titled “Debbie's Date With Radicalism,” playing a bizarre game of six degrees to claim that Wahid was associating himself with groups connected to the financing of al-Qaida because he once spoke at a conference of the mainstream Islamic Circle of North America. (Full disclosure: I attended one of its conferences as an elementary schooler, and so has one of Obama's faith advisors, which may lead to claims that both Obama and I are secretly associated with al-Qaida.)

The article wondered aloud why a “proud Jewess” like Wasserman Schultz would appear with the Muslim-dominated EMERGE, clearly trying to stoke a racial and religious divide. It also quoted a “prominent Jewish Democrat,” who hid behind anomynity to claim that EMERGE's leaders have a “soft spot for terrorism.” The Free Beacon topped off all of this reporting with a memo titled, “DNC BOSS TO RAISE MONEY FOR TERRORIST LAWYER.”

It's easy to play this ridiculous guilt by association game with anyone, of course. Take the Washington Free Beacon, for example. It is run by Michael Goldfarb, a former McCain campaign flack who  is also a senior vice president at Orion Strategies, a Washington, D.C., consulting firm. Orion Strategies has had as one of its clients none other than George Soros' Open Society Policy Center. Goldfarb has also worked for the Emergency Committee for Israel, which has a board member who said Palestinians should be thrown into the sea to be “food for sharks” and whose executive director called on the Israeli Defense Forces to use protesters as “target practice.” By their own logic, the Free Beacon is on the payroll of George Soros and has troubling associations with would-be genocidal anti-Arab activists.

The smear campaign against EMERGE should be more comical than respectable – it was led by hysterical Islamophobes and third-rate bloggers – and it would have been, if not for the fact that Wasserman Schultz appeared to give in to it. “Unless the Muslim community has somebody stand up to this,” reflects Siddiqui on the smear campaign, “this is just going to keep happening. And it needs to stop.”