Is the right really breaking up with its racists? 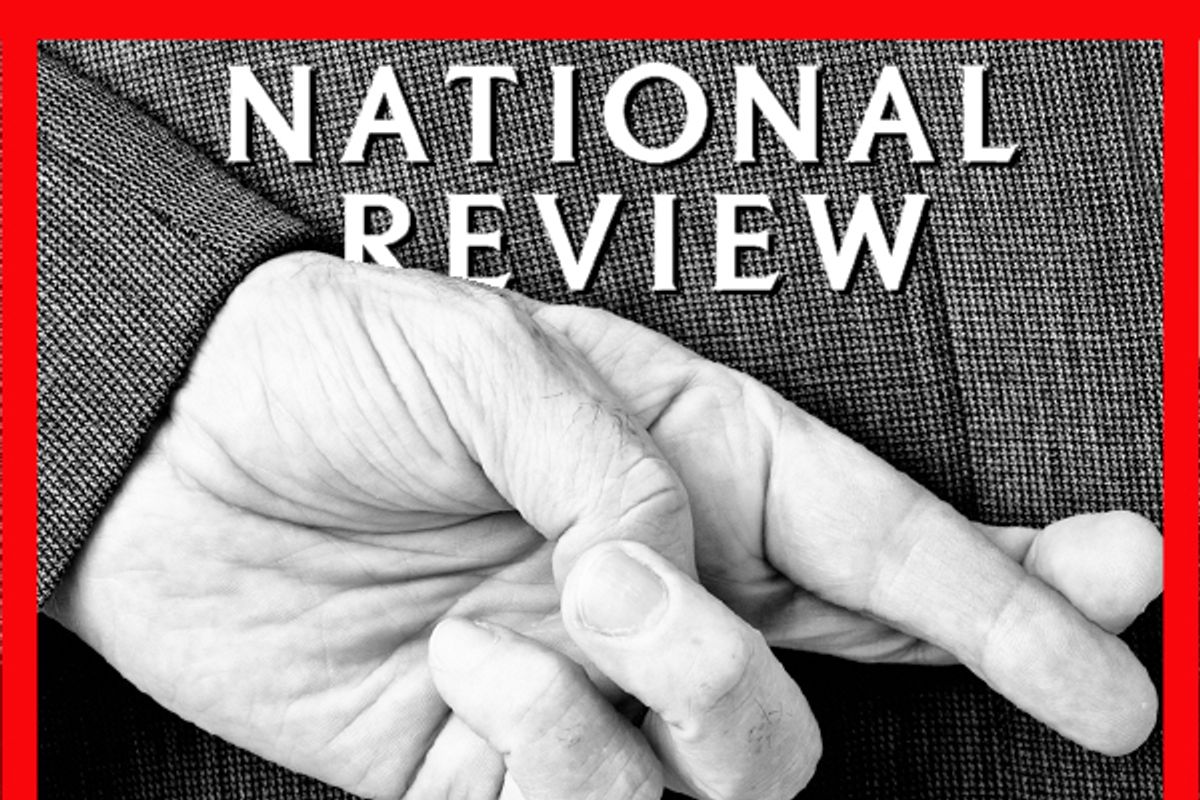 The National Review this month is having one of its semi-regular "purges," in which formerly welcome members of the conservative establishment are declared distasteful and relegated to the "fringes." It began when self-declared racist and longtime National Review contributor John Derbyshire wrote a piece (not for the NR but for "Taki's Mag," an online magazine devoted to lighthearted racism) that went well beyond the bounds of "acceptable" race-baiting. He was canned. Shortly thereafter, another National Review contributor, Robert Weissberg, was fired for having given a presentation at a conference devoted to white supremacy last month.

These two were not fired for suddenly revealing some hitherto unknown and successfully buried racist attitude -- these were not out-of-left field outbursts, like Michael Richards' onstage meltdown -- but for beliefs they had always had and had always expressed. This is what makes it a purge -- a decision that this sort of modern "racialism" is no longer considered an acceptable mainstream Conservative attitude.

That's good! Though it took a while. The National Review's rejection of the overt racists is actually a fairly new phenomenon. Joan Walsh recently wrote of how the magazine was a strong supporter of racial segregation in its early days, and while that support didn't last long, prejudice against black Americans and crank "racialist" beliefs were welcome in the magazine long after the 1960s ended.

In September of 1997, the magazine published a lengthy attack on Steven Jay Gould by white supremacist psychologist J. Philippe Rushton -- another "American Renaissance" conference speaker -- in which he argued that "Mongoloids average about a cubic inch more [brain mass] than Caucasoids and over three cubic inches more than Negroids." This, again, was in 1997, not 1897. In 1997 the magazine also published a lengthy attack on interracial marriage by Steve Sailer, who's made a career out of pseudo-academic nativism. (He is, I believe, still the "film critic" at the American Conservative.) Sailer also penned the National Review's not particularly warm obituary of Gould, in 2002.

When, in 2007, stalwart conservative Linda Chavez complained in a National Review Online piece about rampant bigotry against Hispanics by a few NR contributors, including John Derbyshire, they allowed her targets -- and numerous other contributors not named in her piece but still offended by it -- to respond. And most did, at great length, by accusing her of hurling the dreaded label "racism" at them unfairly, arguing that there's nothing wrong with jokingly referring to all Mexican-Americans as "Aztecs" (Derbyshire) or attacking "Hispanic family values" by claiming that "Hispanic immigrants bring near-Third World levels of fertility to America, coupled with what were once thought to be First World levels of illegitimacy" (Heather MacDonald). Perfectly legitimate political arguments, right?

The National Review represents the most mainstream and least "fringey" element of modern conservatism, and they regularly police themselves to remain so, which is why it's particularly notable that the nativists and white nationalists and white supremacists were welcome members of the NR-dictated establishment up until so very recently. (Of course, they didn't even fully flush out the anti-Semitism until 1993, when Joe Sobran -- still widely considered a brilliant mind with an unfortunate proclivity for Holocaust denial -- was ousted from the magazine by William F. Buckley.)

There are a few more recent examples of American Renaissance conference participants popping up at the National Review: a link to a "revelatory" video chat with Paul Gottfried, a past American Renaissance speaker. Stanley Kurtz (he who regularly paints a dramatic picture of our moderate president's "radical" ties) linking to a "deeply frightening" post on Iran written by "Path to National Suicide" author Lawrence Auster, who spoke at the very first AmRen conference and describes himself as a "racialist." Another positive review of an Auster piece from Candace de Russy. (Auster split with the AmRen crowd due to their anti-Semitism, but he considers founder Jared Taylor a "talented and impressive person" whose "contributions to the understanding of racial realities have been indispensable ...")

Two of those links are from "Phi Beta Cons," the National Review's education blog, where purged Weissberg also contributed. Weissberg's contributions to the site were predictable variations on common conservative themes: p.c. liberals were brainwashing our children, and black people are stupider than white people, because of genetics.

That latter claim is the primary argument of the modern version of the very old field of scientific racism, and it is incredibly popular among a certain variety of paleocon. It was also, as you see, perfectly acceptable at the NR until last week.

The "race and IQ" controversy is largely a lot of bullshit. IQ is partly heritable, and "race and IQ" obsessives draw from that fact the conclusion that black people are genetically inferior to whites (and, often, Asians as well). Then they crow about how liberals are "anti-science" for disputing their methodology and conclusions, because they are essentially trolling.

Let's deal with this as swiftly as possible: "IQ" measures one variety of cultural literacy -- are you good at taking a specific kind of test? -- not innate "intelligence." IQ generally correlates to economic advancement, because, as Malcolm Gladwell wrote in one of his least annoying pieces, it measures "modernity." Plenty of things are "heritable" but not genetic -- like taste in music. An Ireland-born person of South Asian ancestry is almost certainly more likely to enjoy Jedward than an Indian-born person of Irish ancestry, so while the Irish can be said to be more likely to have shit taste in music on that account, it is by no means determined by their genes.

The fact that IQ has been steadily increasing for as long as we've been measuring it -- the famous Flynn effect -- indicates that the test measures a characteristic determined primarily by environment. "Heritability" of IQ is higher in more prosperous classes than in lower classes. In other words, "for the poor, improvements in environment have great potential to bring about increases in I.Q."

Between 5 and 7 percent of human genetic diversity is between subgroups within the classically defined races; 6 to 10 percent of the total human variation is between those groups that we think of as races in an everyday sense based on skin color. The remainder of the variation occurs at the individual level and cannot be categorized by group or subgroup.

If IQ were primarily or even marginally genetically determined, "race" would be about as useful a rubric for analyzing differences in intelligence as hair color or nose shape or any other cosmetic difference. If our society had a history of oppressing red-haired people, there would be researchers manipulating statistics to prove that gingers are simply genetically inferior, and John Derbyshire would be warning his children to avoid large gatherings of Scottish people.

What liberals find obnoxious about the conservative obsession with IQ and its heritability is that it's a patently obvious smokescreen for racism. Charles Murray and his ilk pose as disinterested scientists, but they are political actors. The people who care deeply about the supposed innate genetic differences between "the races" also almost invariably use those supposed innate differences to justify attitudes and behaviors that are indistinguishable from "classic" American racism.

Derbyshire's lessons to his children don't even make sense if you suppose that intelligence is genetically determined, because the "races" are not genetically distinct enough for you to draw useful conclusions about people based solely on those visual cues. It is much more "useful" to draw inferences based on purely cultural signifiers; that group of drunk guys in New Jersey Devils apparel staggering down 35th Street toward Madison Square Garden may seem like people you should avoid, but not specifically because they are white people unknown to you.

The purge at NR is still limited to those who link their preoccupation with "the IQ question" to explicitly white supremacist or nativist politics, like Derbyshire and Weissberg. Charles Murray, who pioneered the argument but who's always careful to stop short of open association with Stormfront types, remains a welcome presence.

Phi Beta Cons, the aforementioned higher education blog where Weissberg was published, is edited by Robert VerBruggen, who, while declaring himself "agnostic" on the issue of genetically determined race-based IQ heritability (hmm), has certainly demonstrated an interest in the subject.

VerBruggen, for example, defended DNA co-discoverer James Watson, who has revealed himself in his old age to be a racist, sexist crank.

Watson isn’t a “racist” but a “racialist”; in other words, he believes that genetic differences between the races might explain differences in ability and behavior, and that’s a travesty.

Watson had recently said (among other things) that aid to Africa was useless because “all our social policies are based on the fact that their intelligence is the same as ours, whereas all the testing says not really.” He also said that “people who have to deal with black employees find" the idea that all people are created equal to be "not true." VerBruggen allows that Watson's comments were "unprofessional," but apparently not "racist." (Racialist! There's a difference!)

Conservatives like VerBruggen seem attracted to genetic determinism, especially when it reinforces their view that society's "winners and losers" each deserve their lot in life: When research shows that the lower classes tend to score worse on IQ tests than rich people, the conservative interpretation is not that IQ increases with, say, greater economic security and nutrition and access to healthcare and a million other environmental factors, but that rich people are rich because they are smarter. This leads to fatalism -- to Murray's sorrowful belief that there's only so much we can do as a nation to improve the lives of our downtrodden underclass. They're just dumb!

To be clear, I'm not calling VerBruggen a "racist," or accusing him of anti-black bias -- I just think that his repeated need to defend practitioners of racialist IQ hogwash is ill-advised, and it certainly helps explain how a white supremacist found a welcome home at the National Review without anyone (apparently) noticing.

If conservatives seriously want to understand why the "cudgel of racism" is still wielded against them, they may want to try to picture how actual black people interpret their fascination with "proofs" (or even just "interesting arguments") that blacks are genetically inferior.