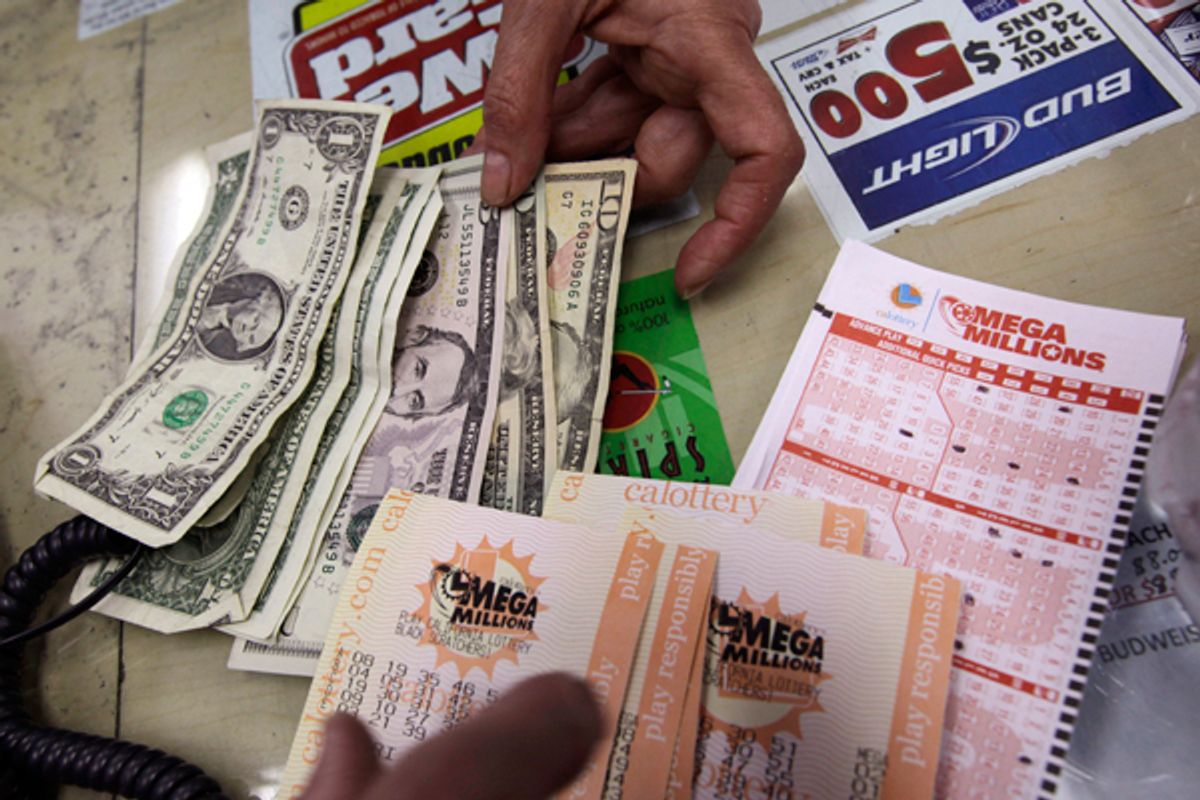 In the days following the historic Mega Millions lottery, there’s been no shortage of drama. Rather than capping off a crescendo of excitement, the drawing ignited an explosion of who-won-it speculation. News organizations breathlessly reported the stories of false victors, lost tickets and state officials envisioning a revenue windfall from possible winners in their income-tax jurisdiction. Almost completely ignored in the hysteria was any examination of America’s problematic obsession with lottery mania.

The word “obsession” is no overstatement. According to the Consumer Federation of America, one in five Americans believes playing the lottery is the best way to secure his or her long-term financial future. The nation is so devoted to this form of gambling, in fact, that ABC News reports a boom in lottery ticket sales even during a recession. That translates to a record $50 billion spent on lottery tickets every year.

At that level of spending, the lottery is being seen as an investment and the trouble is that from a financial standpoint, it’s the worst kind of risk to take, because the chances of a return are so slim. Buying a lottery ticket isn’t like purchasing a volatile stock or even like playing the slot machines -- both of which provide a comparatively reasonable chance of occasionally winning. On the contrary, most lotteries give you odds that are quite literally worse than your chances of being hit by lightning. Considering that, using one’s dwindling income on lottery tickets is a near guarantee to make one’s economic situation far worse – and according to estimates, that chunk is a troublingly large share of income for those who can least afford it.

Cornell University’s Garrick Blalock explains the trend by noting “that when people are feeling desperate, they are more likely to stop by the gas station and buy five lottery tickets, hoping they get a big windfall.” It’s a wholly irrational hope, of course. But at an individual level, at least the initial impulse to buy into the jackpot fantasy is vaguely understandable – we are, after all, hard-wired to believe such fantasies, especially in a media environment that tells us our wildest dreams are just a single wager away.

What’s far less rational -- and far more disturbing -- is the decision by governments to encourage those destructive impulses.

The whole point of republican democracy is for deliberative representative bodies to make considered policy decisions – and not to succumb to reflex. Yet, according to Bloomberg News, our legislatures are “redoubling” their sponsorship and promotion of lotteries, knowing full well they exact a hidden levy on so many citizens.

Why? As with so many public policy issues, it all goes back to the demonization of taxes. Rather than level with the public about what kind of tax rates are needed to fund the basic services, politicians would rather try to raise revenues through fees on voluntary acts -- in this case, the buying of lottery tickets.

While such a tactic circumvents the typical scorched-earth fights over raising traditional taxes, it creates two problems: 1) states aren’t able to raise enough money to fund services from lotteries, whose revenues are inconsistent, and 2) the lottery revenues they do generate are tied up in illogical funding schemes -- the kind that force everything from schools to open space preservation programs to veterans benefits to rely on compulsive gamblers playing games of chance.

Under what public-policy logic does that make any sense? None -- and no matter how many millions of dollars the next overhyped lottery promises to raise, that fundamental truth will not change. Pretending it will only further weaves gambling pathologies into our culture, puts off a long-overdue discussion of taxes -- and makes addressing genuine budget crises that much more difficult.