"Waiting for Sunrise": A spy on the river of sex

A young Englishman stumbles into espionage in a new novel set in treacherous, seductive Vienna on the eve of WWI 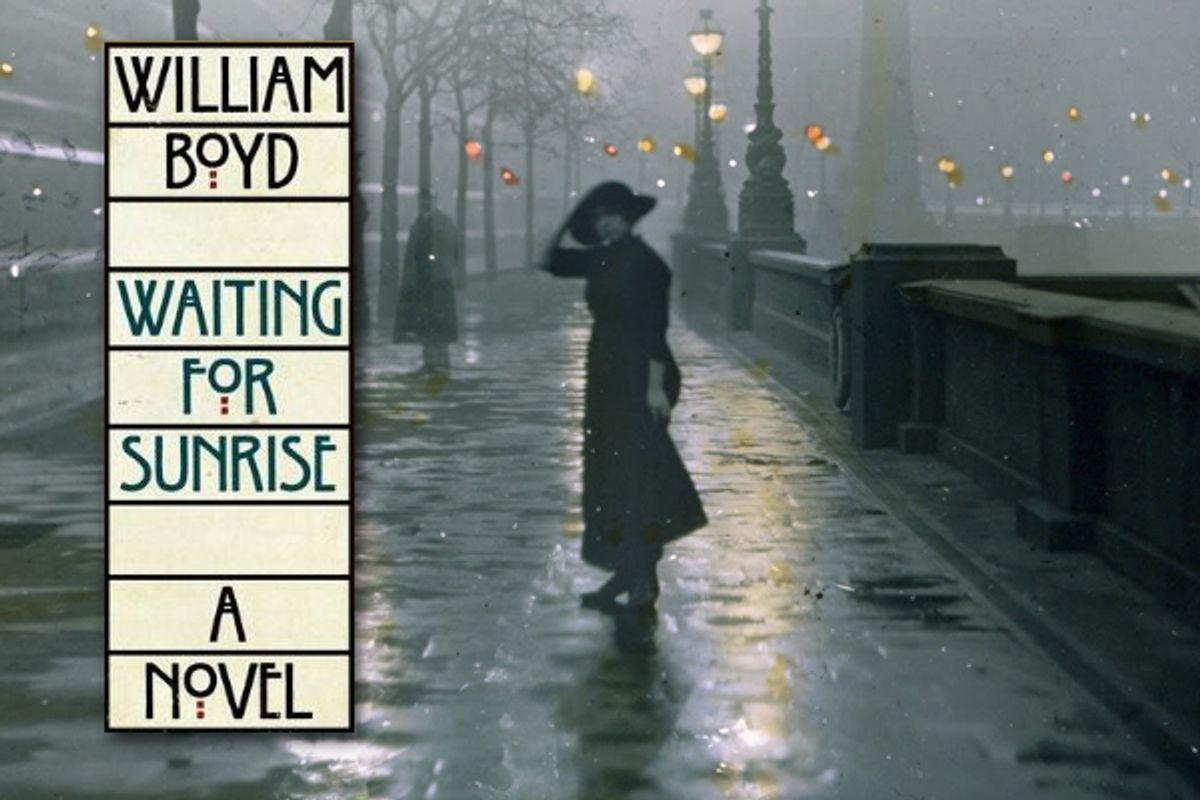 It's Vienna, 1914, and everyone is preoccupied with the secret side of life. Lysander Rief, a young British actor visiting the city, learns that the parlormaid in his respectable boarding house has been turning tricks with a fellow guest, a man suspected of embezzling from the army, who explains to the bemused foreigner that in respectable-looking Vienna, "below the surface, the river is flowing, dark and strong." What river? "The river of sex." Not long after that, Lysander himself begins a passionate affair with a sculptor behind the back of her common-law husband. The rest of his time he devotes to a form of psychotherapy that entails papering over a shameful incident in his past with tamer, happier "memories" induced by hypnosis.

So begins William Boyd's new novel, "Waiting for Sunrise." Of course, Vienna in 1914 was also the stomping ground of Sigmund Freud, whose psychoanalysis had just become popular among Europe's educated classes. Lysander arrives in town to seek treatment for a somewhat unusual sexual dysfunction: He can't reach orgasm during intercourse. Vienna fixes that right up, though whether his therapist's treatment works this miracle or it's accomplished thanks to the ministrations of that seductive sculptor remains one of the novel's many mysteries.

Boyd is the author of "Any Human Heart," a faux biography that was one of the best novels of the 2000s. Lately he's been writing what could be called either high-end spy novels or intrigue-heavy literary fiction. Like Kate Atkinson, who fused the literary qualities of the contemporary comedy of manners with the detective novel, Boyd retrofits a genre full of familiar devices and character types with finer textures and deeper psychology than it typically boasts. Yet just as Atkinson always remembers that the primary concern of the detective novel is justice, Boyd never forgets that spy fiction is fundamentally about lies.

What Lysander receives in Vienna is a master class in lies, beginning with his therapist's theory, dubbed "Parallelism." It holds that, while the actual world is "in essence neutral -- flat, empty, bereft of meaning and significance," human beings "fill it with color, feeling, purpose and emotion" by using our imagination. This effectively means "we can shape our world in any way we want."

Freud himself, who appears briefly in the novel, doesn't think much of this theory. He is, after all, in the business of convincing people that their innermost urges and deeply buried memories can't ever be successfully suppressed. (He'd agree about the river of sex, though.) The reader, too, knows that another, more harrowing form of disillusionment awaits Lysander and his orderly, bourgeois Edwardian cohort with the advent of World War I. Lysander walks into the novel in sunshine and out of it in shadows, which more or less describes the trajectory of his generation.

When his affair with the sculptor takes an especially nasty turn and he has to flee the city in disguise, Lysander's actorly skills attract the attention of a couple of attachés at the British Embassy. Later, after the war starts, they pluck him out of his regiment and set him to work hunting a mole in the War Office. Alluring women with ambiguous motives move in and out of his life. He finds himself constantly second-guessing his handlers and their motives. He does things that he can't really bring himself to acknowledge. "My life seems to be running on a track I have nothing to do with," he writes in the journal he started keeping under doctor's orders in Vienna. "I'm a passenger on a train but I have no idea of the route it's taking or its final destination."

Is Lysander's identity -- and Europe's -- being broken down and remade, or merely excavated to its roots? "Waiting for Sunrise" transpires in a world of impenetrable mysteries and motives, only a few of which actually pertain to military secrets. "We're all actors, aren't we?" says one character. "Some are good, some are average. But nobody really knows what's real, what's true. Impossible to tell for sure."

If the novel has a flaw, it's a tendency for somewhat on-the-nose lines like that. When Lysander agrees to spy, he momentarily longs to be back onstage, then reminds himself that in a way he's still performing. (Perhaps Boyd thinks that potboiler fans who pick this book up will need to have its themes underlined for them? I'd like to think that's not true, but a quick cruise through the Amazon reader reviews of any even slightly challenging novel tells me I'm wrong.)

Still, even as the novel is explaining its theme, it manages to conjure an atmosphere of genuine disorientation that most spy novels gesture toward and few, if any, attain. The book defies enough genre conventions to leave its reader profoundly unsure of just where things are headed.

That's why, I suspect, "Waiting for Sunrise" is set during World War I instead of World War II, by far the more romantic and popular period for espionage fiction. What Lysander -- and the reader -- go through is, after all, very much the experience of cultivated Europeans during the course of the war. Life made sense. It had well-worn grooves that it moved along into the future and there was also observable progress toward a society ruled by reason. Five years later and every comfortable expectation about humanity and civilization had been torn away. Whether Lysander loses his true self or gains it is the sort of question it will take the rest of the 20th century to answer.

Books Editor's Picks What To Read