Can politics catch up with technology? 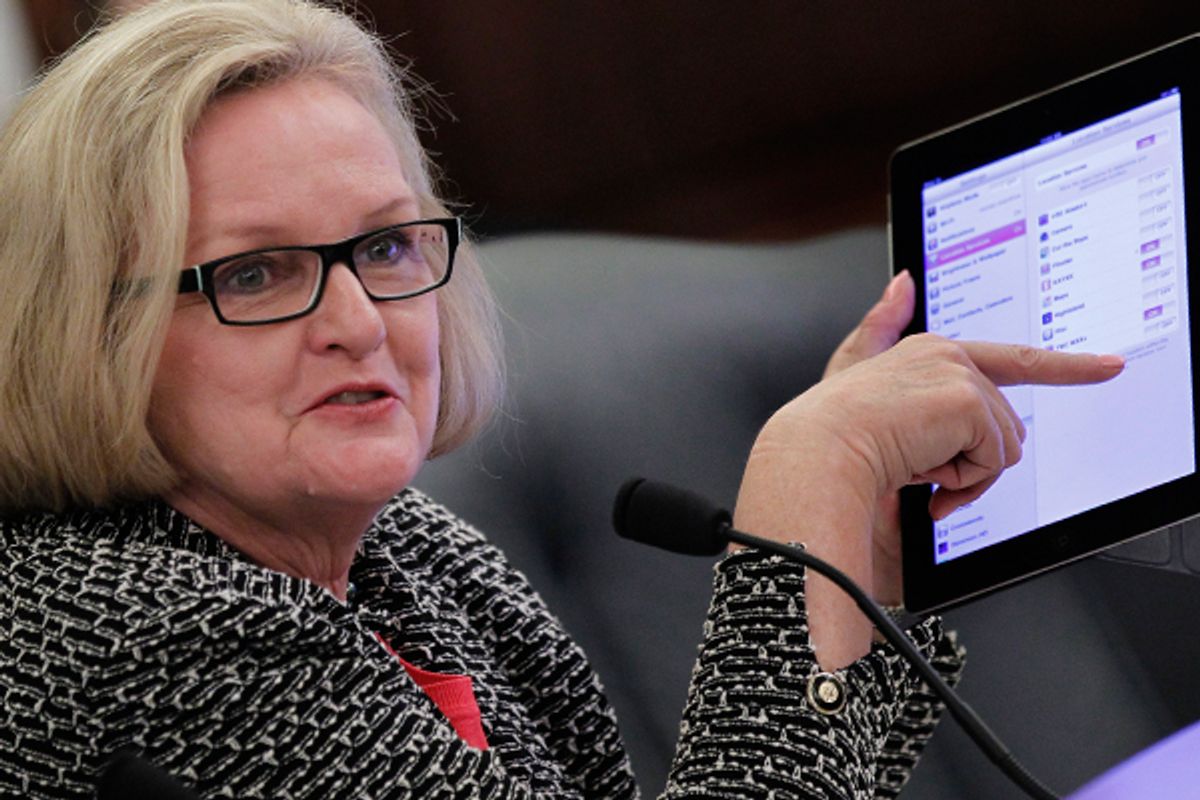 Claire McCaskill holds up her iPad during a hearing of the Subcommittee on Consumer Protection, Product Safety, and Insurance in May, 2011. (AP/Alex Brandon)
--

Altered by transformative technologies, the economy is changing so fast it is leaving politics and government behind. What is true in this election year was also the situation in the 1920s and the 1850s.

In my new book "Land of Promise: An Economic History of the United States," I argue that American government has often lagged a generation or two behind technology-induced economic change. Following the birth of the U.S. in a world of water and wind, of sailing ships, canals and water-wheels, the American economy has been transformed by three “industrial revolutions.” The first, based on the steam engine, produced the railroad and the steam-powered factory as well as the telegraph. The key technologies of the second industrial revolution were the internal combustion engine, installed in cars, trucks, ships, trains and planes, and electric power generation. The most recent industrial revolution, the third, is based on information technology, which is rapidly transforming everything from the way we work to the way we play.

Eras of invention, in which these disruptive technologies are devised, tend to be followed by periods of innovation. The era of innovation can last decades or generations, while entrepreneurs figure out how to use the new technologies in one economic sector after another. James Watt dramatically improved the steam engine in the 1770s, but it was not until the 1830s that steam-powered locomotives and steam-powered factories began to transform the landscapes first of Britain and then of the U.S. and other nations. The internal combustion engine and practical electric motors and electric lights were invented around the same time, in the mid-19th century. But it took until the early 20th century for their effect to be felt in electrified factories based on mass-production conveyor belts and the electric grids and highway grids that underlay a new, dispersed, suburban civilization. The transistor and other elements of the information revolution had been invented by the 1960s, but the new machinery only gradually began to revolutionize the economy a few decades later, by means of innovative adaptations like the Internet, personal computers, smartphones and sophisticated software apps.

Each of these successive industrial revolutions has undermined existing structures of business, commerce and government.  The misalignment between government and the technology-transformed economy often grows for decades, until there is a cataclysmic event like the Civil War and Reconstruction or the New Deal and World War II that brings about long-delayed reform.

For example, the locomotive and the telegraph made an integrated continental American market possible before the Civil War, but modernizing economic reforms had to await the Lincoln administration’s support for the transcontinental railroads and the Union Army’s defeat of the states’ rights South.  A few generations later, the success of the second industrial revolution had created new problems that the Lincoln-era framework could not cope with, including gigantic industrial corporations and predatory electrical utility empires. The shock of the Great Depression allowed Franklin Roosevelt and his successors in both parties to modernize American government and public policy in order to adapt it to the challenges of the second industrial era, like the need for economic security for the wage-earning majority that had replaced a nation of farmers.

In our own time, the IT revolution and the reorganization of business and commerce it has caused is undermining the political and legal structures of the New Deal era. Many of the corporate regulations and labor laws of the New Deal assumed an economy based on national, vertically integrated corporations. But globalization — made possible by a combination of computers, satellite communications and container ships — has created a new kind of global corporation drawing on supply chains in many nations and subject to overall regulation by none. Similarly, America’s unemployment system, designed in the mid-20th century to help well-paid industrial workers in brief recessions, is ill-suited to 21st century America, with its prolonged “jobless recoveries” and the growing ranks of poorly paid service-sector workers in hospitality and healthcare.

Even in the absence of the Great Recession, at some point in the early 21st century the challenges of the IT revolution would have forced radical reform of America’s inherited political and legal system. America’s values of equal opportunity and bold enterprise can only be preserved in changing conditions by intelligent reform. What is needed is nothing less than a generation of creative thinkers and visionary statesmen who can renew and reinvent America in our time as the generations of Abraham Lincoln and Franklin Roosevelt did in theirs.

Unfortunately, even the trauma of the Great Recession so far has failed to discredit and dislodge obsolete thinking about the economy on both sides of the partisan aisle. What are passed off today as bold, original ideas are rooted in ideologies of the 1960s and 1970s — archaic ideologies that took shape before the IT-induced wave of economic revolution was understood or got underway. On the right, in particular, conservatives and libertarians mindlessly cling to the half-century-old dogmas of right-wing opponents of the New Deal like Milton Friedman. Proposals like privatizing Social Security and Medicare were stale and discredited ideas on the libertarian right even before Ronald Reagan was elected to the White House in 1980. The beat of American politics has a distinctly retro 1970s disco sound.

Perhaps it will take a cataclysm even greater than the Great Recession to shatter the hold of establishment dogmatism and force fresh thinking. Or perhaps it will take a new generation of leaders too young to care about refighting the battles of the New Deal era and the Reagan era that followed it.

One thing is certain. The chief obstacle to prosperity lies with our institutions and our ideas, not with a lack of innovation or resources. In government, academic and commercial labs in the U.S. and across the world, revolutionary new technologies like exascale computing, additive manufacturing, robotics, phonemics and genomics are being invented or developed. Meanwhile, vast amounts of money are looking for profitable investments, even as enormous numbers of potentially productive workers in the U.S. and around the world remain unemployed. If the technology, the money and the labor can be mobilized, with support from politicians more interested in shaping the future than in defending the past, the potential exists for unprecedented advances in prosperity, health and wealth in America and the world.

But that promise will not be realized in the absence of leadership adequate to the challenges of our age. America has plenty of politicians willing to seek election by seeking the lowest common denominator. Where are the leaders willing and able to rise to the occasion?