Robert Kagan says the U.S. wages wars because the American people want them -- and both candidates are listening 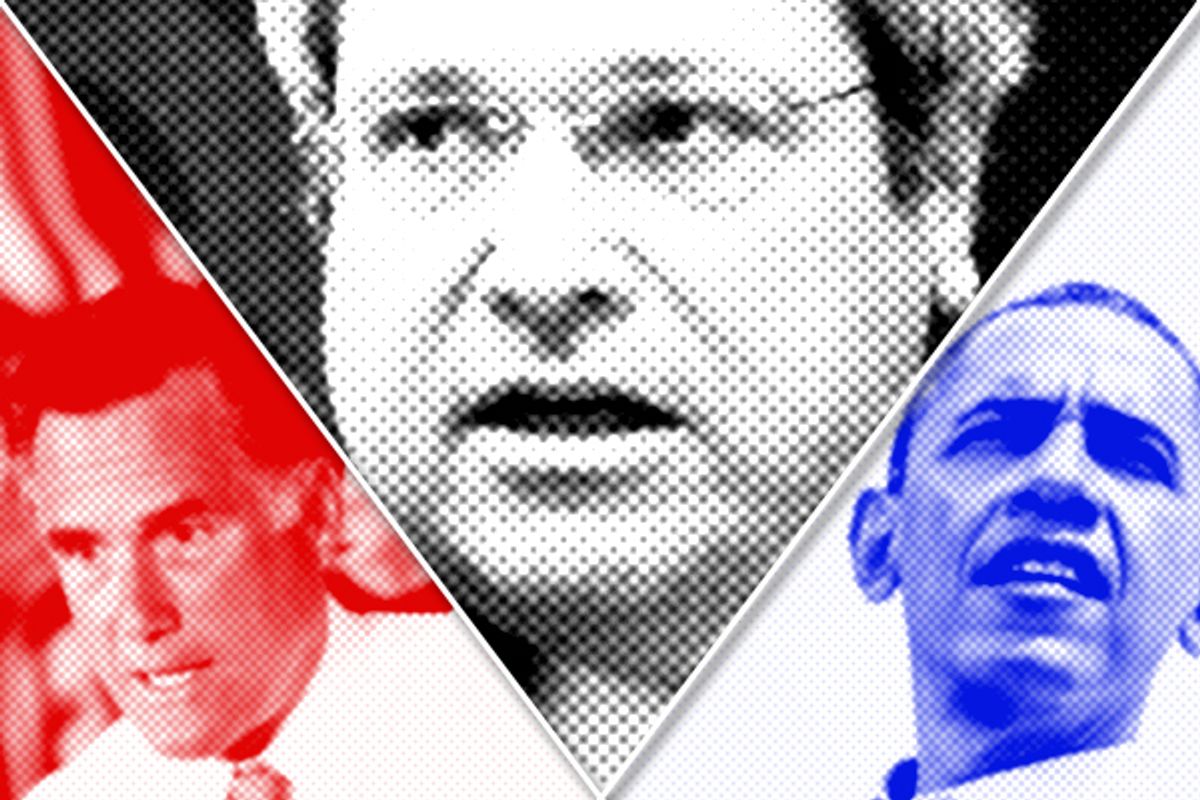 As a living embodiment of Washington’s bipartisan foreign-policy consensus, Robert Kagan has few peers. The author of the best-selling book "The World America Made," Kagan has pulled off the neat trick of impressing the only two men on the planet who have a realistic chance of serving as president of the United States any time soon.

In a much-noted passage in his State of the Union address, Obama echoed Kagan's argument that America, despite a decade of war and a near-bankrupt economy, is not a declining or foolish power but the world's indispensable nation. "Anybody who says America is in decline doesn't know what they're talking about," Obama declared after making a point of letting Foreign Policy's Josh Rogin know he had recommended Kagan's thesis (as excerpted in the ) to his advisors. Kagan also serves on Secretary of State Hillary Clinton's Foreign Affairs Policy Board, whose agenda is "shaped by the questions and concerns of the Secretary."

At the same time, Kagan's bona fides as a Republican hawk are indisputable. He got his start in the State Department under Reagan and wrote with Bill Kristol in 1996 “Toward a Neo-Reaganite Foreign Policy,” the foundational document of modern Republican foreign policy. Unsurprisingly, he was an enthusiastic supporter of the Bush administration's invasion of Iraq in 2003. He serves on the board of directors of the Foreign Policy Initiative, a conservative think tank that routinely finds fault with Obama's leadership. Kagan now advises Romney, saying he has met regularly with the candidate over the years, most recently for a few hours last summer. Bipartisanship in U.S. foreign policy is alive and well -- with a neoconservative flavor.

"I actually believe in a bipartisan foreign policy, not for its own sake," Kagan tells Salon, "but because I think there actually is a bipartisan consensus on foreign policy. There are plenty of neoconservatives in the Obama administration and there were plenty in the Clinton administration, if you would define 'neoconservative' as I would. What's lost on people not in Washington is how close this community really is."

Military interventions have occurred "under Democratic presidents, Republican presidents, idealist realists, you name it," Kagan explains. "America keeps returning to these policies." People may be sick of the wars in Iraq and Afghanistan, he argues, but polls show support is high for an attack on Iran.

"So even as the American people tire of one war, they're getting ready for the next one," he says. "If this system is warlike, it’s the tendency that flows from the public."

Yet the overarching theme of Kagan's work is essentially a happy one -- and optimism is no small part of his success. In Kagan's view, U.S. foreign policy is, on the whole, a benevolent force in the world. Yes, America can be aggressive and warlike in seeking to spread its interests and ideals, he admits. Nonetheless, he says U.S. military power has constructed an economically liberal and politically democratic world that most Americans favor and that the world finds congenial. His books, whether slender or fat, tell a story of the continuing morality of U.S. foreign policy.

“It is precisely because American foreign policy is infused with an unusually high degree of morality that other nations find they have less to fear from its otherwise daunting power,” he once wrote in an article co-authored with Kristol.

Such claims prompted critics of the Iraq war to accuse him of "wishful thinking" or "hubristic arrogance." In response, Kagan insists the Iraq invasion helped pave the way for the Arab Spring.

"Did the Iraq war have an impact in the Arab world? I think the answer is probably yes. There were repeated free elections in Iraq and that undoubtedly had some effect on how neighboring people views their government. I think Egyptians said. 'If the Iraqis can have elections, why can't we have elections?'" he said.

This wan argument is heard more often in Washington than in Cairo, where democratic forces have spent decades seeking elections to free themselves of a U.S.-funded dictatorship. Paeans to the U.S. invasion of Iraq explain little about Egypt's democratic aspirations, as Kagan surely knows.

He is on firmer grond when he says that Obama's war in Afghanistan, and the drone wars in Pakistan and Yemen, fit into the U.S. tradition of military intervention. The United States has undertaken roughly 25 overseas interventions since 1898, he notes, an average of one foreign military action every 4.5 years. Since the end of the Cold War, the rate of U.S. interventions has increased to one every 2.5 years. U.S. troops intervened or engaged in combat in 16 out of the 22 years after 1989.

In Kagan's reading of U.S. foreign policy, the anti-interventionist tradition is, by definition, outside of the "mainstream" even when, as is the case of Iraq, the mainstream itself came to repudiate the war. Not even a fiasco of an invasion launched on a false premise (that Saddam Hussein had weapons of mass destruction) can disturb his comforting notion that military intervention is an expression of America's essential benevolence. Even when America is wrong it is right.

This grand historical narrative reassures the close community of like-minded policymakers in Washington who want to believe in their own idealism. It also appeals to a liberal American president in a tough reelection fight who wants to preempt Republican attacks. Some say Obama cynically betrayed his principles to embrace an interventionist foreign policy. Others will say he decided early on to go with the Washington flow. Kagan says, in effect, Obama has chosen the American way of war. All three versions have merit.

At the same time, nonetheless, Kagan thinks Romney would be a more effective president than Obama.

"The truth about Romey is that he's very pragmatic," Kagan says. "He's a problem solver as you would expect him to be given what he's done with his life. He has some basic core principles about what he thinks the role of the U.S. is. But he's not doctrinaire. I think you would see someone who is more about trying to deal with issues in whatever effective way there is."

But Kagan is out of step with the Romney campaign in more ways than one. In his Washington Post column, he has praised Obama's "lonely courage" and enumerated five things he's done right. His relatively progressive views on Egypt are not going to be echoed by the the Republican contender. To those who charge Obama and Kagan "abandoned a U.S. ally" in Egyptian President Hosni Mubarak, Kagan pleads guilty.

"If the ally is the person Mubarak, yes I was advocating abandoning that ally, just as I advocated abandoning [Nicaraguan dictators Anastasio] Somoza and abandoning [Filipino dictator Fernando] Marcos. I think U.S. support for right-wing dictators  during the Cold War was a mistake. I think supporting the Arab dictators was a mistake and I think we're reaping some of the consequences now."

To those conservatives alarmed by the rise of the Islamist party Muslim Brotherhood in Egypt, Kagan counsels toleration. "I am soft on the Muslim Brotherhood," he says. "In the long run a successful Egyptian democracy that has these Islamist qualities is probably in our interests."

His main complaint with the Obama administration is its decision to slash military spending. Kagan said Romney would not cut the defense budget and would have better relations with U.S. allies in Europe and Israel. But you don't get the feeling that Kagan thinks the difference between Obama and Romney would  be like night and day. Instead of cutting the defense budget, he says "we need to cut entitlements.  I'm talking about indexing entitlements for upper-income people."

And thus Kagan quietly acknowledges the costs, as well as the benefits, of America's global empire that he champions. His vision of U.S. foreign policy anticipates near-constant war abroad and a smaller pension for Grandma at home. In the close community of policymakers in Washington, that's what passes for bipartisan common sense. Outside of that community, many Americans from the liberal left to the libertarian right want a choice, or a least a debate, about the wisdom of permanent war. But we're not likely to get it in 2012, not with Bob Kagan advising both candidates.