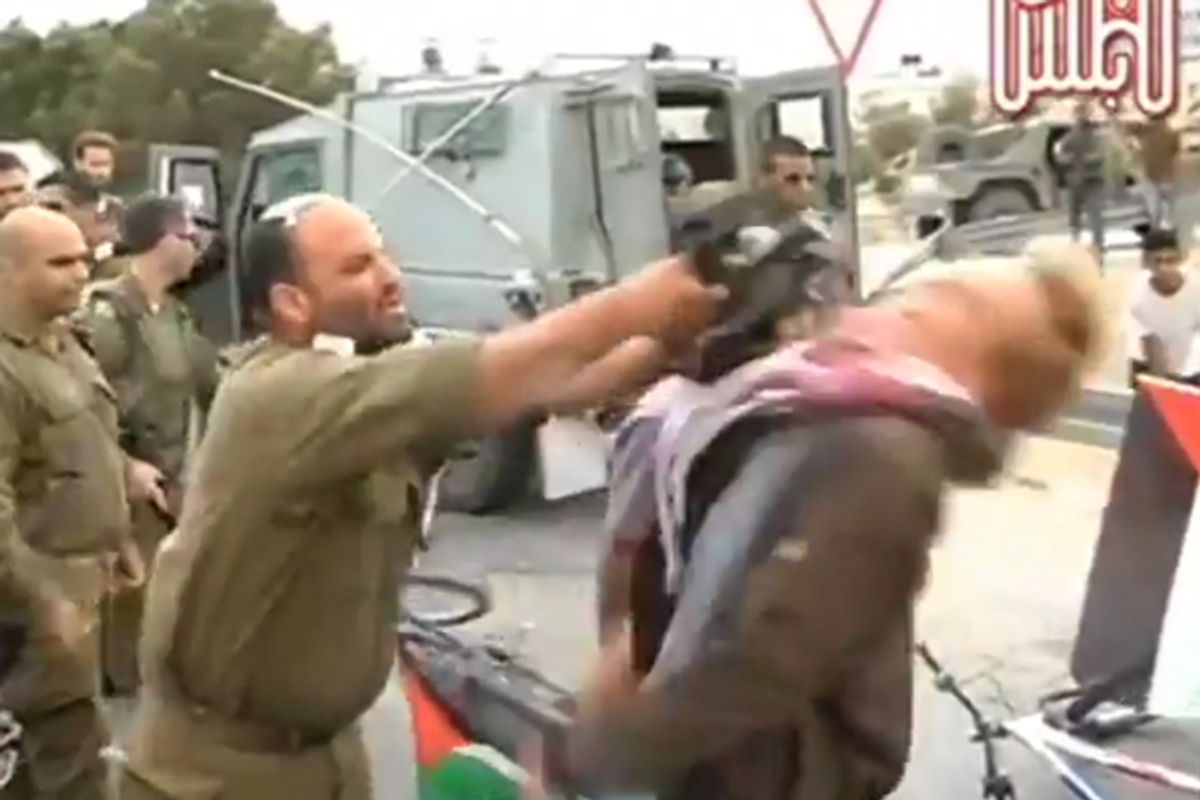 BEN GURION INTERNATIONAL AIRPORT – The ironic thing is that Israel has never had it so easy ruling the Palestinians, yet never has it come so unhinged in the face of nonviolent protest. Life in this country now is as safe as it is in America; Palestinian troops work with the army and Shin Bet every day to stop terror; the Obama administration has gone mum. Yet the government and most of the public inflate every impolite moral challenge from the Palestinians or their supporters into a national security threat.

The Netanyahu government, more so than its predecessors, confuses sovereignty over Israeli territory with sovereignty over the West Bank and Gaza Strip – which is what inevitably sets off the protests, causing Israel to freak out and sooner or later commit some act or acts that most of the world finds appalling. It’s a vicious circle; no matter how much security Israel’s military, political and economic power provide, the occupation does not let this country rest. The events of Sunday were a great example.

“Israel will prevent hostile elements from entering,” vowed the minister of public security, Yitzhak Aharonovitch, during a security drill at the airport before a planned “fly-in” by 1,500 pro-Palestinian activists, mainly Europeans, who were hoping to land and bus straight away into the West Bank. They wouldn’t have had to go through Ben Gurion, of course, if the  Palestinians in the West Bank – or Gaza – were allowed to do what free nations do, such as build their own airport. This was the implied point of the “Welcome to Palestine” fly-in.

As they did when they headed off a similar protest last summer, Israeli authorities gave foreign airlines the names of the majority of activists who’d bought tickets to Ben Gurion for Sunday, warning that upon landing they would be deported ASAP and the airlines that flew them in would be billed. In response, Air France, Lufthansa, Britain’s Jet2 and other carriers canceled most of the activists’ tickets, while the few dozen who did manage to get on flights were scooped up by Israeli security as soon as they touched down, and detained for deportation.

In the arrivals hall at Ben Gurion, camera crews and cops waited for something to happen, but the only action was provided by two Israeli leftists who held up “Welcome to Palestine” placards before being hustled off by police. A small group of right-wing counter-protesters unfurled a big Israeli flag and gave interviews to bored reporters.

“The pictures speak for themselves – all is quiet, the operation was a great success, the security forces prevented an attempt to undermine Israel’s sovereignty,” Benzi Sao, the police officer in charge, told Channel 2 news. Prime Minister Benjamin Netanyahu’s bureau wrote up a sarcastic letter to hand to the activists awaiting deportation: “We … suggest that you first solve the real problems of the region, and then come back and share with us your experience. Have a nice flight.”

Mission accomplished, as far as official Israel was concerned. Then it all went to hell.

The fly-in was only the second story on Channel 2 news, having been pushed down by a shocking video taken that afternoon in the West Bank by pro-Palestinian activists. It showed one of them, a young, blond, unarmed Dane, getting abruptly smashed in the face by an M-16 rifle wielded by a senior Israeli army officer. The video, posted on YouTube, went viral. A still photo showed the officer, Lt. Col. Shalom Eisner, rearing back with his rifle, about to bash another protester in the back.

About 250 Palestinians and Western sympathizers had been on a protest bike ride when Eisner and his men tried to break it up. He said the protesters had attacked them with sticks, and was photographed later with his hand bandaged, saying a protester had broken a couple of his fingers. The protesters, though, said they’d done nothing but ride their bikes when the soldiers went after them.

Whatever the truth, the YouTube looked terrible for Israel, and nothing could justify Eisner’s act. He apologized, the army called it a “grave” incident and suspended him. Netanyahu said: “This kind of behavior does not represent Israeli soldiers or officers, and it is not acceptable in the Israeli army or the State of Israel.”

Well-l-l-l-l…  The talkbacks and Facebook seemed considerably more pro-Eisner than anti-, with endless variations of “The only purpose in these scumbags’ lives is to instigate, and create mayhem. If the soldier hit this bum, he deserved it.” (From “tough jew” on The Jerusalem Post’s talkbacks.) One of Israel’s 120 Knesset members, Michael Ben-Ari, who is banned from entering the U.S. because of his affiliation with the outlawed, violently anti-Arab Kach party, actually said: “Well done. … Radical leftists must be handled with a heavy hand.”

Israeli soldiers and policemen trying to run the West Bank, playing Goliath to the Palestinian side’s David – this story is as old as the occupation, which will be 45 years old in June. On the surface, things are under control, except for the odd incidents that keep driving this country crazy. On the surface, it could be evidence of a guilty conscience.