I thought starting my own medical marijuana operation would be easy and safe. Then the DEA crackdown started 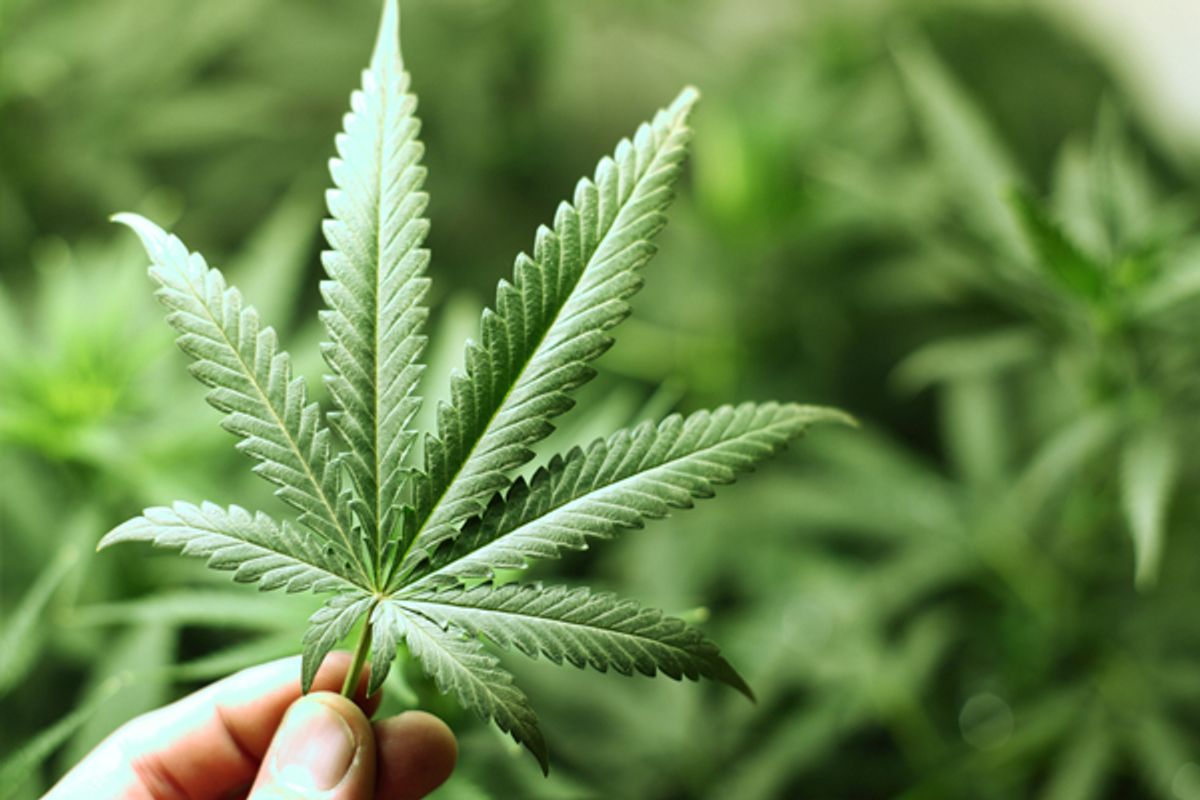 It was sometime around 2 a.m. when I heard the car doors slam. I live on a very quiet street in Fort Collins, Colo., surrounded by working families who are usually falling asleep under the blue glow of their TVs by 10 p.m., and any noise in the night usually means that something is about to happen. And on that night I was certain it was about to happen to me.

Six marijuana plants were growing in my basement and because of shortsighted planning on my part, their odor had gotten completely out of control. Having never grown pot before, I foolishly overlooked the prominent admonitions printed in every growing guide I relied upon to help me with my harvest, that odor control was of the utmost importance. But equipment designed to mask the smell (ozone generators, activated carbon filters) is expensive. How much stench could six little plants really produce? I remember thinking. Well, a lot.

As I lay there in bed night after night praying that sealed doors and windows would at least contain the eau de cannabis indoors and not alert the neighbors to what I was up to, I inevitably questioned my wisdom. I’m not a drug dealer or suffering from some crippling illness. I don’t even smoke marijuana for fun; if I did, I’d at least have a better excuse for subjecting not only myself but my wife and son to the stress of running a clandestine suburban marijuana farm.

I’m just an author whose idea to research and write about medical marijuana laws and the legalization debate through hands-on experience seemed damned near genius when I concocted it in late 2009, while watching an episode of "Weeds." That looks subversively fun, I thought. And profitable. And hey, I live in Colorado, one of what was at the time 13 states to approve medical marijuana use. Writing about this law and all of its attendant controversies — is it just a ploy by clever potheads to give legal cover to perfectly healthy stoners, or was there something to the whole medical benefits argument? — through complete immersion was a no-brainer. I’d be the A.J. Jacobs of pot and have far more fun than he had: Would you rather try to abide by the dictates of the Bible for a year or grow some weed and try to abide by your state’s medical marijuana laws?

Diving into the deep end of a subject is nothing new for me, even if it means breaking the law. I once tried to smuggle a diamond out of West Africa while researching diamond smuggling for "Blood Diamonds" (the rough diamond I bought on the black market in Freetown, it turned out, was a fake, but I didn’t know that until I got to the United States). I learned how to pick locks for "Flawless," a book about a diamond heist, and I even snuck myself into the vault that was robbed so I could see what it was like. Compared to those minor crimes committed in my dedication to research, what was growing a little pot?

A lot more than I’d bargained for, as it turned out. First of all, it’s no minor crime. It’s a federal felony to grow even a single marijuana plant, with a minimum fine of $250,000 and a minimum five-year prison sentence. This is true whether you’re growing to alleviate the symptoms of chemotherapy, to get stoned watching "South Park" or for journalistic research. I knew this going in, of course, and figured that with so many people growing marijuana in Colorado at the time — in late 2009, in the wake of the Ogden memo, which signaled that the feds were going to leave state-sanctioned medical marijuana users and their suppliers alone, you were hard-pressed to find someone who wasn’t at least considering the idea — there would be safety in numbers.

While this turned out to be generally true, there were a number of worrisome developments once my plans were too far along to stop, primarily a steady stream of arrests and DEA raids on people using the medical marijuana law. The most high-profile was the case of Chris Bartkowicz, a suburban grower in nearby Denver, who was raided by the DEA and busted for growing more than 200 plants. He came to the attention of the DEA by going on the nightly news — using his real name and not bothering to obscure his face — to boast about his grow operation, an unfortunate decision compounded by the fact that his house was located within 1,000 feet of an elementary school, an automatic sentence enhancement.

I had no plans to even remotely follow his example. Once I qualified as a medical marijuana patient (with the help of a doctor whose definition of “severe pain” helpfully included my complaints about a sore back) I would only be growing six plants, the maximum allowed under state law for individual patients. My home is half a mile from the nearest school. And I obviously didn’t intend to issue a press release to the TV stations about my little project

But still. Bartkowicz faced 40 years in prison (he took a plea bargain and will serve five). I was fairly certain that the DEA wouldn’t waste its time taking down such a small-timer like me, but once the pot began to bloom in the basement and become fragrant, even I started to wonder if they’d somehow multiplied from six into 600. A Catch-22 of the state medical marijuana law is that the only way you can prove you’re in compliance with it is after you’ve been busted. If it’s the DEA that does the busting, whether you’re toeing the line or not is immaterial — federal law trumps state law.

The slamming doors in the night turned out to be nothing, of course. Just some neighbors coming home from a late dinner. Is this really worth it? I asked myself, crouched in my underwear and peering through the curtains.

The answer was yes, and for a most unexpected reason. Before this experiment, I was perfectly ambiguous about whether marijuana was legal or not. I wasn’t opposed to recreational smoking but because I don’t use it myself, I haven’t felt much enthusiasm to agitate for its legalization. If you’d pressed me, I would agree that the expense of enforcing its total prohibition — an expense borne not just by taxpayers, to the tune of some $13 billion annually, but also by those who are busted and face personal and financial ruin — makes little sense, but also that there are more pressing issues to deal with. And like many who haven’t given the matter much thought, I had some skepticism about its purported medical benefits. Without a pressing medical need prompting me to find out for myself, I was happy to let more interested parties hash it out.

What propelled me into the debate was the outrage medical marijuana laws had generated, not just in Colorado but across the country. The often ill-considered over-reaching by marijuana proponents — for many reasonable people who are undecided about pot, garish dispensaries blazing neon pot leaves from their local strip malls feel like being given the finger — was nothing compared to the militaristic hysteria unleashed by the federal government. Cops were busting into homes and blowing away the family pets looking for reefer and in many cases, turning up next to nothing. Perfectly sober businesses (to speak in relative terms) that followed the letter of their state laws were being pulverized under the heels of DEA agents. Although my personal experiences with marijuana are limited (and well in the past), I knew enough about the effects of pot to realize that the governmental reaction was far out of proportion to the actual threat.

That perception became sharply focused the more I learned about marijuana’s potential as a valid therapeutic tool in treating everything from cancer to nausea. The government’s rabid insistence that medical marijuana is as real as the tooth fairy is simply wrong. The National Institute of Cancer sees promise in its ability to attack tumors. It’s been known for decades to battle chemo-induced nausea better than oral drugs that have the obvious drawback of being vomited up before they can take effect. MS patients have used it to ease the spasticity in their muscles. Cannabinoids — marijuana’s unique ingredients that interact with specific receptors in the brain — have anti-inflammatory effects and can relieve pain. Importantly, cannabinoid receptors aren’t found in the parts of the brain that regulate breathing, which could be one of the reasons no one has ever died of an overdose, making marijuana safer than many foods we eat.

Delving further, I found that one of my own relatives, a cousin who had lost a battle with mesothelioma, had used marijuana to cope with chemotherapy. She lived in New York, where her caring friends and family members had no choice but to deal in the criminal underground to get it, while in nearly a third of the states (most of them in the West) patients could shop with dignity at their choice of dispensaries. That perfectly healthy people who’ve faked their way into the system can do so too is — to me, at least — a small price to pay for those patients to safely obtain the relief they need. It’s certainly not an abomination worthy of the crackdown that has resulted.

Medical marijuana laws are not perfect. They can indeed be easy for healthy people to abuse. Without the involvement of regulators early in the process of developing systems for sale and distribution, which requires a state government more willing to address the issue than simply by plugging its ears and covering its eyes, hoping it will go away, chaos can result. Cops and politicians are going gray overnight with impotence and confusion, usually causing them to overreact and unleash the hounds. Chronically strait-laced citizens who will never believe anyone but the government on this issue see them as evidence of moral meltdown.

But one of the unintended consequences of these laws is that it forces more reasonable folks who might never have given much thought to the issue of medical marijuana — people like me, in other words — to take the effort to sort through the hype. It sounds trite to herald my enlightenment as something newsworthy when so many have figured out long ago what an indefensible failure the war on marijuana has been and that it’s morally repugnant to continue it in the face of mounting evidence of its credibility as a medical substance. But the truth is, without medical marijuana laws and all of their attendant upheaval, I never would have been interested enough to grow my own and embark on my own process of discovery. I may never have seen the light.

In that regard, federal drug cultivation laws were the best ones I’ve ever broken.

Greg Campbell's new book is called "Pot, Inc.: Inside Medical Marijuana, America's Most Outlaw Industry." He is the author of "Flawless: Inside the Largest Diamond Heist in History," "Blood Diamonds: Tracing the Deadly Path of the World's Most Precious Stones" (the source material for the Leonardo DiCaprio movie of the same name) and "The Road to Kosovo: A Balkan Diary." Campbell is also an award-winning journalist whose his writing has appeared in The Wall Street Journal Magazine, The Economist, The San Francisco Times, Paris Match, and The Christian Science Monitor, among others. He lives in Fort Collins, CO.