My favorite john: My very own "Pretty Woman"

Hector was a handsome Argentine. I was the male escort he hired. What happened next surprised us both 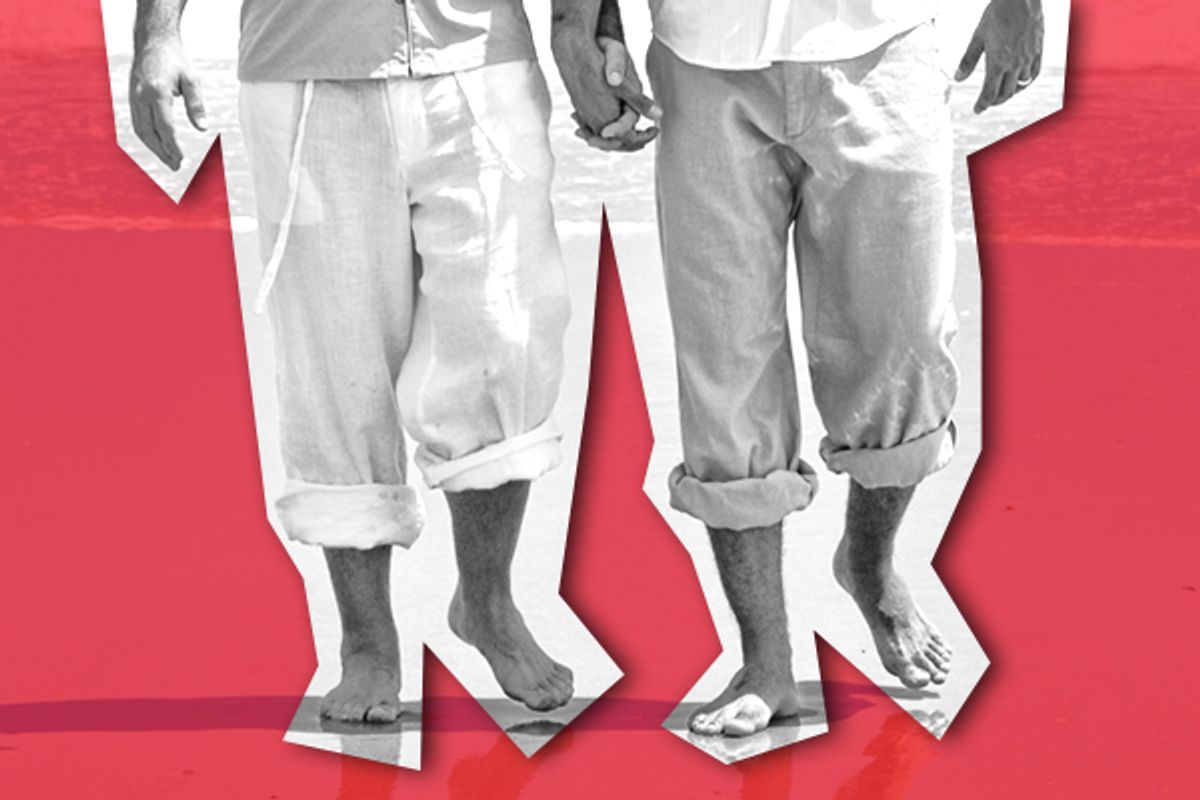 When people learn that I’m a gay male escort, they invariably ask me how much my life is like the movie “Pretty Woman.”

“It’s more like ‘Daddy Day Care,’” I usually quip. And while that's meant to be a joke, there’s also some truth to it. I spend a good amount of my work time offering support and advice to men in their 30s and 40s who are just coming out of the closet. Surprised? I was too, at first. But then I thought, where else are these guys going to catch up on two decades of sexual and social experience? Until someone comes out with “Gay for Dummies,” the next best thing is a trained professional.

A few years ago, for example, a charming man from Vancouver hired me every night for a week while he was in Las Vegas for a conference. By the time he went home we'd checked off every item on his wish list, and he was finally comfortable lying naked with another man. It was strangely gratifying to help a guy learn the ropes.

But nothing prepared me for Hector: Thirty-nine years old, handsome, stocky, with a full black beard. Born and raised in Argentina, he lived in Chicago and owned a seat on the stock exchange. He was successful but lonely, and so intensely left-brained that he had carefully engineered a self-improvement plan: He took a sabbatical from work to get himself together. Among other things, he needed to admit he was gay and better understand how that fit into his life. That's where I came in.

When I first spotted him I thought, “Damn, this guy needs new pictures.” He was much better looking than he’d led me to believe, and more socially adept as well. We clicked instantly. And I don’t know where he learned how, but he kissed like the devil himself.

We had a suite at the Bellagio and spent the weekend like a couple of princes. We went to the spa on Sunday, and then stayed in our bathrobes and ordered appetizers from room service while we watched the Oscars, like two teenagers pretending to be Hollywood royalty.

We also made practical plans, mapping out the next few months on a calendar, scheduling what we’d do and where we’d go. He came back to Las Vegas twice, and we traveled together to Washington (for the cherry blossoms), Provincetown, Montreal, Miami, Hawaii and – wait for it – Paris for the French Open. This was the best gig ever.

Now, I can be what my friends kindly refer to as “an acquired taste.” I have a classic Irish temper, I talk too much, and I tend to be too clever by half. I can also be moody, needing to go off by myself for no discernible reason. So while I wasn’t concerned I'd get bored with Hector, I was a little worried he might get tired of me. But we only had one serious confrontation.

I tried a little too hard to share my love of nude beaches, for which Hawaii is especially famous. He tolerated the one we found on Maui; it was beautiful, and it wasn’t crowded. But the one on the Big Island was another story. It required a treacherous climb to get to, and was filled with too much tie-dye and the kind of bodies no one wants to see naked. Long story short: We didn't stay very long.

We were spending a few days in Hilo, which is not a town most people recommend. The best hotels haven’t been renovated since the '70s and there are very few sandy beaches within city limits. As we were driving back, Hector grew quiet, and I tried to fill the air with idle chatter.

“Can we not talk until we get back to the hotel, please?” he asked.

Eventually we stopped for coffee.

“I’m really angry right now,” he started, “so I have to ask you this and hope I get an honest answer.” A beat. “Was that beach the whole reason we came to Hilo?”

I’m not usually very good with confrontation, and my knee-jerk response is to raise my voice. But Hector was calm and his tone was more inquisitive than accusatory, so I tried to follow his lead. “If you knew me any better,” I answered, “I’d be really pissed off that you asked me that question. I don’t manipulate people, and I really don’t like being accused of it."

I understood where Hector was coming from, especially given the number of disappointments we’d already met with in Hilo. I explained to him that I didn’t even know about the nude beach until we’d planned to come here. I wanted to come to Hilo for the botanical gardens and the waterfalls we'd seen that morning.

It was the only time he ever pulled rank, and within a day the story was a joke between us, the mere mention of Hippie Hollow eliciting mutual groans.

The “Hippie Hollow Incident” was the most mature disagreement I have ever had – including fights with my parents, everyone I’ve ever worked for, and all of my boyfriends. The guy I lived with for four years? We’d have had two weeks of drama and a ruined vacation at the very least. Instead, Hector and I grew closer because of it.  Was this because this was ultimately a business deal and we weren’t arguing as much as negotiating? Or was it because we were especially adept at communicating with each other? Who can say?

Whatever the reasons, the rest of our time together only became more enchanted: sunset dinners on the beach in Kona, orchestra seats for “Follies” at the Kennedy Center, watching Federer’s narrow victory over Monfils from a box at the French Open. It was the kind of magic that would make even a chick-flick aficionado roll her eyes and say, “Yeah, right.” And yet there we were.

The last time I saw Hector was in the Newark airport after we came back from Paris. We’d planned to meet up again in San Francisco for one last week before he returned to work. Instead, he canceled a few days before our meeting. His leave had gone terribly over budget, he said, and he wanted to spend time alone before heading back to work. We’d do a long weekend in the fall, after he’d readjusted to work. Sounded good to me.

I tried to arrange a rendezvous over Thanksgiving and then again over Christmas, but both times he demurred. I was on the East Coast for New Year's and I asked him if I should stop in Chicago on my way home. He never gave me a straight answer until I pushed the issue. He said it wasn’t a good time.

So our story is unfinished. We send each other text messages several times a week, and I consider him one of my best friends. And yet, I still can't help wondering what things would be like if we’d met under different circumstances.

Once, while walking along the Seine (you can’t make this stuff up), he told me how sad he was that our time together was drawing to a close. Half-joking, I suggested he take me away from my life of crime and make an honest man of me. He said he wished he could, and I believed him. I still believe him. But I also know that we live in a real world where people click and then discover all kinds of complications. We just happened to know the complications in advance, and then went on the honeymoon, only then to discover how much we liked each other. For now, I continue to mentor guys in the ways of love with other men. Hector has returned to work with confidence, and he has no trouble meeting guys. I encourage him to date. If I know the way Hector’s mind works he won’t even think about embarking on any kind of serious relationship – with me or anyone – until he’s had more practice. In the process he might meet the one guy who’s perfect for him, and good for him if he does.

I know nothing serious could grow between us until I retire from the skin trade. I certainly couldn’t date a hooker – I’m way too insecure for that – and I wouldn’t expect anybody else to. But I’m not planning to escort for the rest of my life. I expect I’ll leave Vegas eventually too; there’s way too much world out there for me to stay in the desert. I don’t expect anything as widescreen as a limo or flowers or being “saved” by anyone (with or without a lot of money); I gave up on that fantasy a long time ago. What’s different for me now is that I’m able to imagine somebody else – maybe Hector, maybe not – in the picture with me on whatever comes next. And that means seeing things through a whole new lens.

Rusty McMann is the professional name of a working call bear.