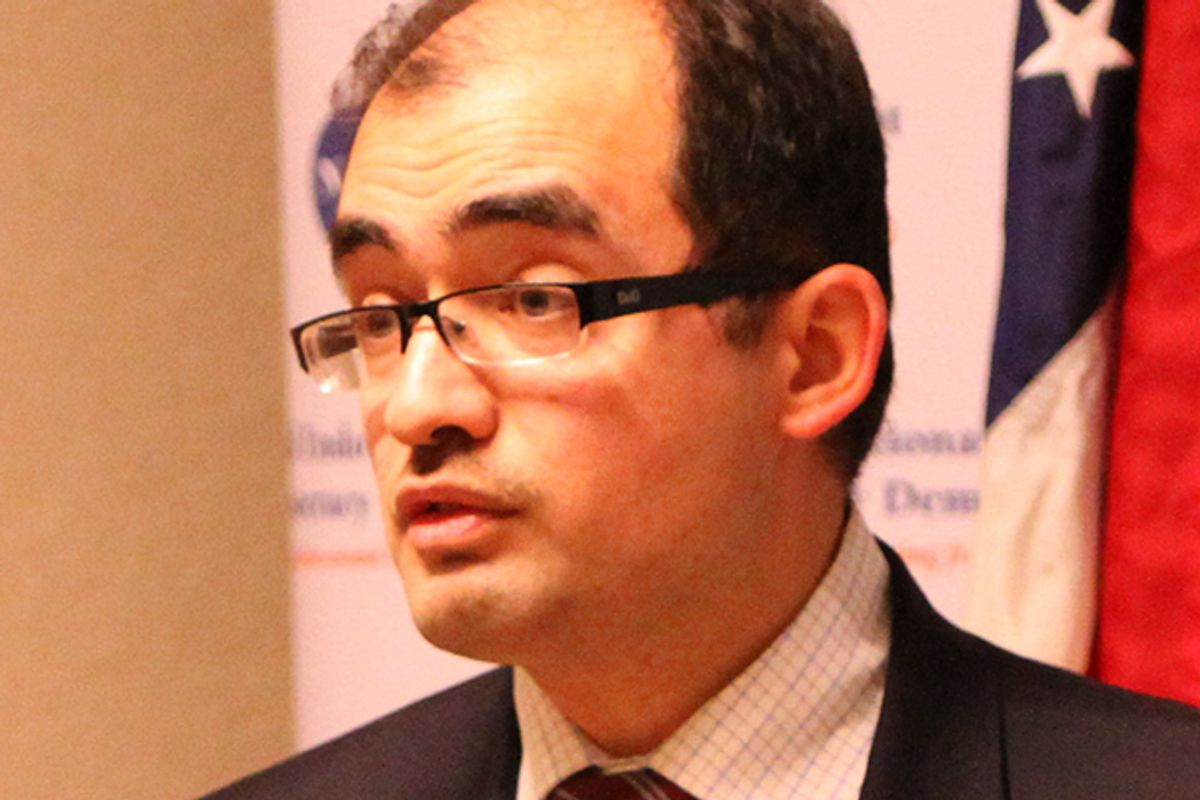 Radwan Ziadeh fled Syria with his wife via the Jordanian border in October 2007. He had come to Washington many times before that, for conferences dealing with his work on Syrian politics. But upon returning to his homeland after one Washington visit, the head of the Syria Security Forces told Ziadeh that if he left and returned again, he would be placed in prison. An arrest warrant was issued for him in 2008, and his family was banned from leaving the country. “I only have Skype conversations with my family back home now,” he says.

In Washington, however, Ziadeh has become a crucial figure for those hoping to establish a new Syrian order. In October 2011 he formed the Syrian National Council (SNC), “to unite the opposition and establish an inclusive organization that would include different groups.” It is now the main umbrella group for exiles and opposition groups. Ziadeh has met with Secretary of State Hillary Clinton, influential senators like John McCain and Joe Lieberman, and members of President Obama’s National Security Council. A senior fellow at the Institute for Social Policy and Understanding, a Washington-based Muslim think tank, he writes for publications like Foreign Policy and The New Republic, passionately urging the international community to save his people from their own government. And yet, the gap between Ziadeh’s pleas and America’s interests reveal the limitations of those hoping the United States can act as a savior on the international stage.

Ziadeh is one of a small number of liberal democrats in Arab and Muslim countries who harbor virtually no resentments towards the West in general, and the United States in particular, for its interventions in the Middle East, support for local autocracies and unconditional support for Israel. Like the Egyptian scholar Saad Ibrahim and the Iranian dissident Akbar Ganji, Ziadeh sees the West as a partner and its political institutions as a potential model. Unlike Ibrahim and Ganji, however, Ziadeh believes international intervention is the only thing that can stop the slaughter of his people.

He has credibility as a prescient observer of currents in his native land. In April of 2011, Ziadeh predicted that the Syrian people’s “determination is strong enough today, despite the increase in the number of those killed, and people will continue to participate despite the enormous arrest campaign launched by the security services.” More than a year later, Syrians continue to battle with the government despite a death toll monitors say has topped 10,000.

It certainly helps that Ziadeh had connections in the United States long before the uprising began. He has held fellowships at or been affiliated with everywhere from Harvard University’s Kennedy School of Government to the United States Institute of Peace to the National Endowment for Democracy. It is precisely that comfort in Washington, however, that makes him suspect among his critics. He is derided as a “State Department tool” and a neoconservative puppet on blogs and websites written by Middle Easterners far more hostile to the U.S. It surely doesn’t help that the State Department under President George W. Bush began funneling millions of dollars to Syrian opposition groups beginning in 2006, according to WikiLeaks cables. Syrian dissidents were unwilling to openly accept U.S. money: “[N]o bona fide opposition member will be courageous enough to accept funding,” a February 2006 cable lamented.  But the money still found its way into the country.

Despite the long history of enmity between Syria and the U.S., Ziadeh is confident that the vast majority of his countrymen want the international community to intervene. “Nobody is calling for U.S. troops on the ground,” Ziadeh is quick to say. “Syrians are ready to defend themselves and to force [Syrian leader Bashar al-Assad] to step down.” Rather, calls are coming from within for help as “the only way to stop the killing,” he says. He envisions something like what happened in Libya, where NATO established a no-fly zone and launched an air campaign. “It’s the only way to stop the killing,” he says. “The call for intervention is coming from Damascus, from people on the ground.” The SNC, for which Ziadeh is the spokesman, has daily contacts with citizens inside Syria, and although he admits a consensus is impossible to achieve, he is certain outside assistance is urgently desired.

It is easy to see how “the international community” can become a euphemism for American power, however. A confidential NATO report obtained by the New York Times this week shows that the Libya war was essentially a U.S.-carried effort. “The findings undercut the idea that the intervention was a model operation and that NATO could effectively carry out a more complicated campaign in Syria without relying disproportionately on the United States military,” the Times noted.

In addition, most analysts believe it would be far more difficult to accomplish in Syria what was done in Libya. Former National Security Advisor Zbigniew Brzezinski, for example, supported the intervention in Libya, but cautioned last month that conditions in Syria were far less conducive to a favorable outcome. “There was significant military and political opposition to Qaddafi at a high level, which surfaced immediately when the unrest and the violence erupted,” Brzezinski said, among other differences he noted.

Brzezinski’s comments are echoed by U.S. officials, who have been reluctant to intervene in Syria to a large degree. They also point to the gap between what many activists frequently want from America, and what America is capable of delivering. From Sudan to Syria, human rights campaigners want the United States to stop oppression across the globe. But with a mixed record at best on foreign interventions, and the U.S. badly overstretched as it is, internationally and economically, Radwan Ziadeh may be asking America more than it is capable and willing to give.