The EPA's new standards mean hydraulic fracturing is here to stay, but don't expect them to solve air pollution 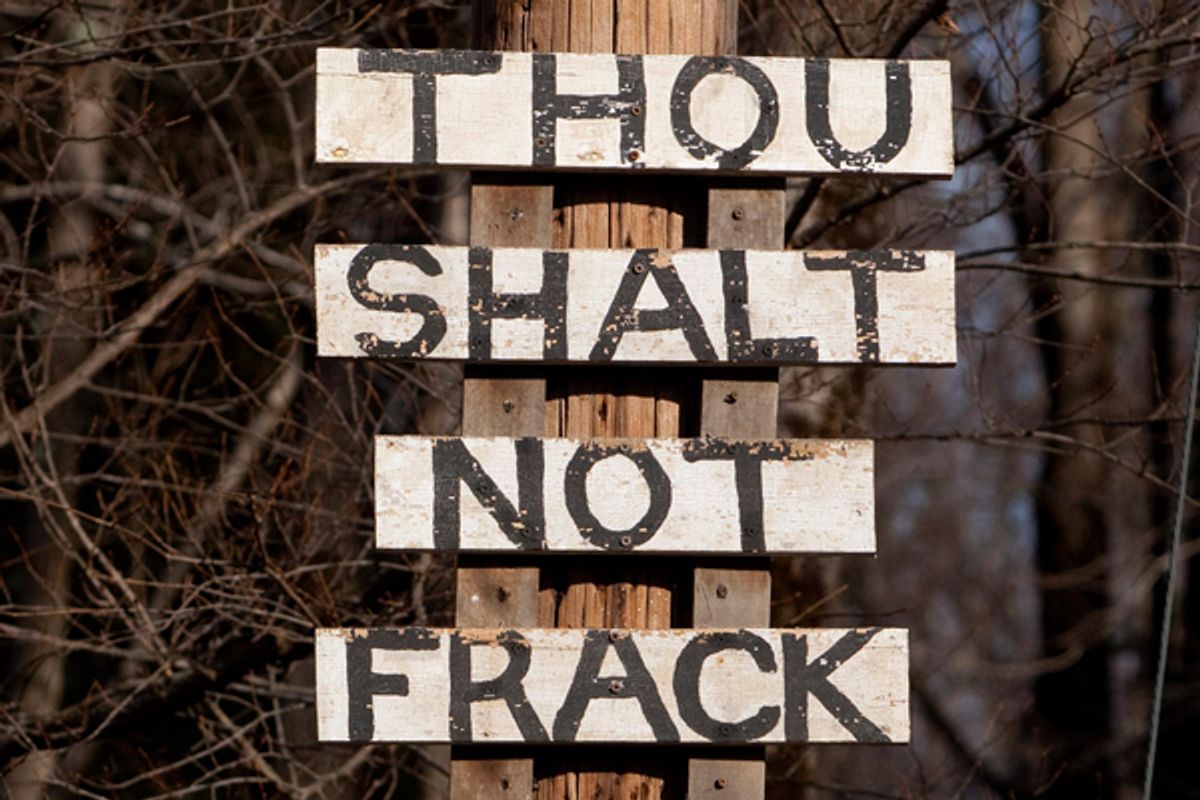 The Upper Green River Basin isn’t the type of place that’s supposed to have smog. In the southwest corner of Wyoming, right in the heart of the Yellowstone ecosystem, the basin’s seas of sagebrush stretch on for miles, and every year, antelope migrate south from the Grand Tetons. Only 10,000 or so people live in Sublette County, which stretches over an area the size of Connecticut. There are no stoplights.

But last winter, ozone levels in the county spiked above federally acceptable standards 13 times, hitting levels more commonly associated with places like Los Angeles and New York City. In the last 10 years, the gas drilling industry has moved into the area, alongside the ranchers and the grizzly bears, and started opening up gas wells using hydraulic fracturing, or fracking, methods. The industrial equipment drillers brought with them — the heaters, dehydrators and engines — has been spitting smog-forming pollutants into the air. The wells themselves have been polluting the air, too, as methane, a potent greenhouse gas, and other hazardous compounds vent from the ground and into the atmosphere.

This hasn’t been a problem only in Wyoming. Similar ozone spikes have appeared near drilling fields in Utah and Colorado, and at least a portion of Texas’ air problems could be linked to drilling there. Air pollutants like benzene are also threatening the health of people living near gas wells. And so today the Environmental Protection Agency announced new standards for oil and gas companies that within the next few years should reduce emissions from gas wells. They’re the first ever air quality standards that apply to wells drilled using fracking methods. For newly fracked wells, the EPA estimates the rules will reduce the emissions of some hazardous compounds as much as 95 percent.

Since the Obama administration started touting its “all-of-the-above” energy strategy, the president has been emphasizing that natural gas should be embraced, and at the top of the EPA call announcing the new standards, Assistant Administrator Gina McCarthy reiterated that “natural gas is key to country's clean energy future.” This enthusiasm rests on the premise that drilling companies can extract natural gas from the ground safely and with minimal impacts to the environment and to the health of people living in and around gas fields. Or, at least, more safely than they’re managing to now.

The rules announced today won’t fix fracking: They don’t address the well-documented issues with water contamination, and in Wyoming and Colorado, where similar regulations are already in place, air quality remains a problem. The EPA also backed down on the timeline for requiring “green completions,” a technique that allows gas companies to capture methane and other pollutants coming out of wells and to make money doing it. Still, environmental groups are praising these rules as a step in the right direction. At the local and state level, environmental activists are pushing for fracking to be banned altogether, but on the national level, any regulation at all counts as a victory.

“People are being poisoned today, and we need to be able to deal with those impacts,” says Jeremy Nichols, director of the climate and energy program at WildEarth Guardians. His organization, along with the San Juan Citizens Alliance, took the EPA to court back in 2009 in order to force the agency to review the air pollution standards updated today. “Establishing some reasonable level of certainty that they'll be protected is important,” Nichols says.

In theory, the industry should be happy to implement the EPA’s new requirements. They’re the rare environmental regulations that save companies money — as much as $19 million a year, once the rules are fully implemented, the EPA estimates. To reduce pollution using green completions, gas drilling companies need to capture the methane and other compounds they right now let escape into the atmosphere. Methane is natural gas and, separated from the other pollution, it can be sold at a profit. The EPA has found that, across the country, as many as half of fracked wells that could be using this process already are.

That hasn’t been enough to wipe away air pollution problems, though. In Wyoming, the rising ozone levels convinced legislators to put in place rules requiring these sort of controls years ago. The spikes in ozone levels in Sublette County showed up despite those rules.

“Wyoming was forced to do our innovations because we had such a hammer fall on us, especially in 2008, when we had astronomical readings in the ozone area,” says Stephanie Kessler, Wyoming program manager for the Wilderness Society. “We've had many years of some of these control technologies in place, and we still had our worst ozone season ever last winter.”

The goal of environmental groups, though, isn’t to fix fracking, but to ensure a basic level of safety and accountability that’s been missing up until this point.

“Is this going to solve all our problems and the underlying issue of the safety of fracking? Certainly not,” says Nichols. What the EPA rules could do is help protect people who are living near the more than 11,000 wells newly fracked each year. Whether those wells should be drilled at all is a thornier question that’s not on the table, at least not in this election year.