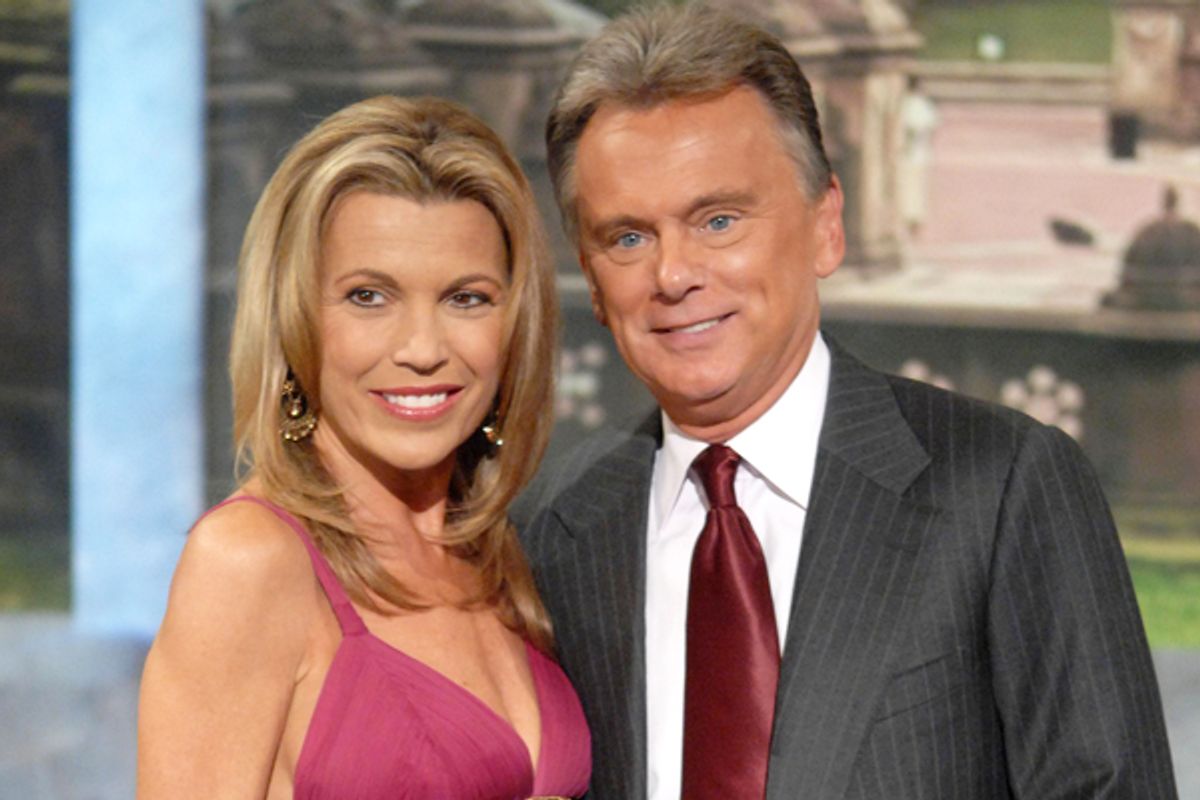 Television can sometimes feel like Ripley’s Believe It or Not, a vast side-show attraction brimming with weird, wild and wonderful oddities -- hoarders, swamp-dwellers, toddlers and their tiaras. But one of the strangest artifacts contained inside your TV set looks fairly unassuming, hiding its peculiarity in plain sight -- or, more accurately, right next to “Jeopardy.”

“Wheel of Fortune,” a word game mixed with roulette, fill-in-the-blanks gone gambling, premiered in 1975. In 1981, Pat Sajak came aboard as host. In 1982, the un-aging Vanna White joined in the now-outdated role of game-show round card girl. In 1983, the program began airing in syndication at night, where it has been providing after dinner entertainment to grandparents ever since. If the show’s ’80s set design does not convey just how static the series has remained, consider that one of its bigger alterations was the introduction of a touch screen in 1997. Prior to that, White was still turning the big rectangles by hand. Now, she silently paces the stage — I like to imagine that her path before the letters is worn and shiny, as a trail befitting a pop culture Sisyphus should be — and lightly caresses the boxes’ edge. “Wheel of Fortune” is a show out of time, and this can be seen in just about every facet of it, from its hosts and costumes to its pacing and its prizes, and, most of all, its attitude about money.

Despite, or really because of, its lack of change, “Wheel” remains immensely popular. Throughout the ‘80s, “Wheel” occupied a bigger spot in the public consciousness; White appeared in Playboy in 1987 and had a best-selling autobiography, “Vanna Speaks.” But she was still such an object of desire in the early aughts that she appeared in rap lyrics. In this decade, the show has regularly taken a back seat to “Jeopardy” and even “The Price Is Right” in terms of buzz (give or take a viral video of a contestant solving a puzzle with just one letter). But “Wheel” still has a larger audience. Earlier this month, it averaged over 10 million viewers an episode, which makes it not only the highest-rated show in syndication, but would have made it one of the top 20 most-watched shows in prime time. (As another point of comparison, that week's “30 Rock” had 2.8 million viewers.)

Anything this popular must have some appeal, and each episode of “Wheel” begins to exert its hypnotic if idiotic pull from the start. The show begins with zero explanation of the rules, as if “Wheel” were both aware of how easy it is and also so confident of its place in American culture that explaining itself would be like providing directions on how to use the bathroom. The first game is a "Toss Up,” in which the board begins to fill with letters, and the three contestants vie to guess what is being spelled as quickly as possible. It is impossible to watch a “Toss Up” without wanting to fill in the blanks, even though the words and phrases being spelled out are bland and arbitrary, as if created by a person pairing adjectives and nouns found in a dictionary for second graders.

On “Wheel of Fortune,” if you are asked to guess a food it might be “Chicken Tenders With Creamy Honey Mustard” (as if “chunky honey mustard” were a common condiment). A person might be a “Friendly Lifeguard." A thing might be “Fabulous Prizes.” “Wheel” would be a lot more lively to watch and play, if, as with Trivial Pursuit, it updated its entries. Even the least hip grandparent could go more contemporary than this. But such a change would also make it more current, something “Wheel” is not at all interested in being.

With the “Toss Up” completed, Sajak, and his Flock-of-Seagulls-with-the-wings-clipped hairdo, introduces the demographically correct contestants. The three participants are almost always two cardigan-wearing women and a man, two white people and an African-American. They all appear to be under the age of 45. They always clap and clap and clap and clap. Sajak’s conversations with the guests are friendly and perfunctory — he has done this tens of thousands of times and it shows. Besides, he is saving his energy for the 30-second chat with Vanna that comes at the end of each episode. But these chit-chats do what they are supposed to, revealing the contestants to be wholesome, normal Americans. They are employed or in school. If they’re married, they are asked about their spouse and children. If they are single or divorced, no mention is made of their relationship status.

What is most striking about these few minutes of dull conversation is what’s missing: Sajak rarely asks the contestants what they would like to do with the money if they win. Occasionally a player will do this for themselves (“I’m studying for law school, and this money would really help”), but “Wheel,” unlike every program from “Idol” to the Olympics, never tries to tug on your heartstrings, a decision that is both immensely boring and also unexpectedly restrained — why should anyone’s sob story be more serious than another's? And why should you listen to a sob story at all? This is just a game.

In any given episode, one player might amass upward of $10,000 in a turn at the wheel. In the non-“Toss Up” rounds, when the wheel is in play, it makes sense to keep spinning even if you can solve the puzzle, guessing letters and buying vowels in order to win more money or a vacation. But the more you spin the wheel, the more likely you are to land on “Bankrupt.” Contestants rarely get upset when it happens to them.

Staying calm when losing $10,000 of game show money you just made is very sensible, and it must soften the blow that everyone who plays on “Wheel” walks away with at least $1,000, and usually much more than that. But humans’ ability to count their chickens before they hatch is so common that there’s a cliché to describe it, and on shows like “Jeopardy,” “Who Wants to Be a Millionaire” or even “The Price Is Right,” there is some wincing when a contestant loses a bundle. Watching “Wheel” you would think we were a nation of good losers.

This is partly because “Wheel” is anti-tension. Its rapid pace does not give its players (or audience) time to obsess on a big win or grieve about a big loss. Someone is spinning the wheel in five seconds either way. The money doesn't seem real. It could just as easily be points as dollars. “Wheel” is also not a matter of skill. Watching the “Toss Up” rounds, it's clear that some contestants have studied and are especially fast at filling in the blanks. Yet if they keep landing on “Lose a Turn” or get a phrase with no “R's" in it, they will do badly. But they'll have been let down by fortune, not themselves, and this hurts less.

If there is something a little dark in “Wheel’s” casualness about money — a TV-ready version of the slot-machine players, lottery-ticket buyers and real-estate flippers among us — “Wheel” is also about comfort. Here is a universe in which playing with cash is a harmless game, not a world economy-destabilizing one. Here is a set where the ‘80s never ended, women barely age, and people are healthy, happy and well-mannered. Here is a place where no one really needs the money, the most anachronistic thing of all.

After the two polite losers have been shuttled off, Sajak takes the winner (by the hand if she’s a woman) to another part of the stage. He or she spins a smaller wheel and takes out an envelope containing a secret prize before playing the final game, which is harder than the ones that have come before. The contestant usually loses, but sometimes she wins another large amount of money, a trip or even a Winnebago. And if she does, she will smile and clap and hop up and down, because, among other things, there is no such thing as lousy gas mileage on “Wheel of Fortune.”