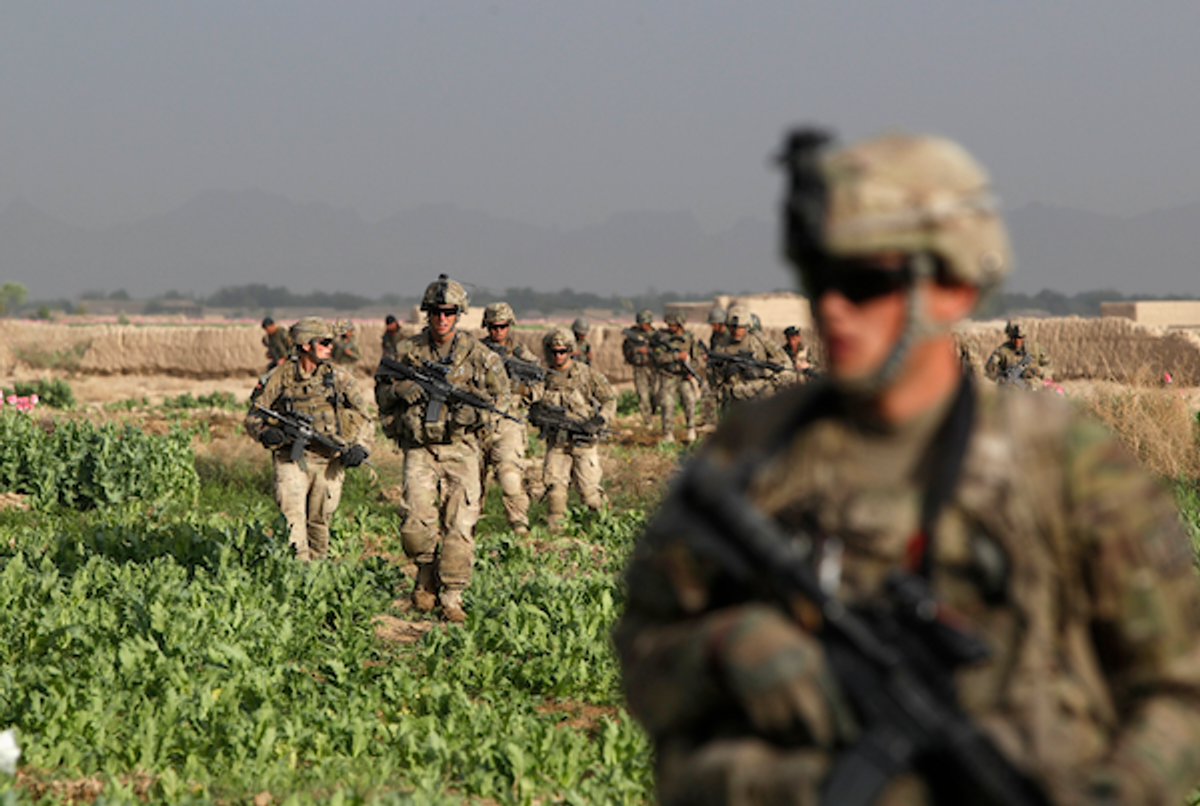 The L.A. Times Wednesday published photos of American troops in Afghanistan posing and grinning with the body parts of dead Afghan insurgents. There are 18 photos in all of soldiers posing with human remains, all from 2010, and the Times published two of them. The newspaper received the photos from a soldier in the unit depicted, who, according to Times editors, sought to publicize "dysfunction in discipline and a breakdown in leadership that compromised the safety of the troops."

The L.A. Times informed the Pentagon of its story and waited 72 hours before publishing. The Army, notably, had not launched a criminal investigation into the troops responsible for the photos until the Times contacted them. The Obama administration and the Pentagon have both condemned the soldiers responsible for the pictures, but also expressed disappointment in the Times for publishing them. Wired's Spencer Ackerman refers to the photos as "yet another unforced error" for U.S. forces in Afghanistan. It's a depressing and disturbing story, from a long and miserable war.

It's also an opportunity, obviously, for various nuts to write asinine and offensive things.

Ralph Peters, a retired Army lieutenant colonel currently employed by the right-wing media as a cartoonish satire of bloodthirsty jingoist militarism, declared on Fox that he was furious not with the soldiers who created the disturbing photos, but with a military leadership that refused to "stand up" for our troops by not investigating them for crimes they commit. He also, naturally, blamed the liberal media:

“I suggest the White House spokesman Jay Carney join the military and see what it’s like himself before he condemns our troops,” Peters continued. “I’m especially appalled that those in uniform, General [John R.] Allen, our commander in Afghanistan, just jumped to trash our troops.”

The "real scandal," as ever, is not the actual scandalous thing. It's some other thing, related to Obama's secret radicalism or fetish for apologizing for America's greatness, or the liberal media's apparent hatred of our fighting boys in uniform.

At the National Review's the Corner today, David French reports that the real scandal is not that these soldiers desecrated bodies, nor even necessarily that the L.A. Times published the photos, but that the L.A. Times didn't publish some other thing, four years ago, that would've proved that Barack Obama is a Muslim, or just a guy who likes Muslims a little too much.

Let's just reprint the whole thing because it's a classic of the genre:

If there’s one thing that’s utterly predictable during the course of our war, it’s that major journalistic outlets will publish stories that shame our troops or place them at greater risk — but only after very public (and comically insincere) hand-wringing. I wonder ... if any Afghan soldiers turn their weapons on their American allies as a reprisal, will the Times editors at least send flowers to the families of the fallen? Perhaps a card? “We’re sincerely sorry that our journalistic ‘ethics’ led to the death of your husband/wife/son/daughter, but there was a vital need to cast our war effort in a negative light. After all, the New York Times leads us in Pulitzers at the moment, and nothing says ‘Pulitzer’ like exposing two-years-old wrongdoing by privates.”

Did the soldier who sent the photos to the L.A. Times do so in order to help that struggling newspaper win a Pulitzer, do you think? Or did he do so because he is some sort of self-hating troop who wants troops like himself to be killed?

But if you’re one of those courageous and fearless “let’s tell the raw truth, and let the chips fall where they may” types, and you’re tempted to respect the L.A. Times for its journalistic integrity, let me remind you of a time when the newspaper showed restraint: When it decided — in the midst of a hotly contested presidential campaign — not to publish a videotape of Barack Obama praising former PLO spokesman Rashid Khalidi at a 2003 dinner. After all, that’s just a future president discussing one of the world’s most hot-button geopolitical issues (with a bonus appearance by applauding domestic terrorists). Move along. Nothing to see there.

The reason French knows about this shocking tape of Barack Obama praising a well-respected Columbia professor is because the L.A. Times reported on it, in great detail, repeatedly, in 2008. It didn't release the video because its source gave them the video on the condition that they not release it. I assume the soldier who sent these Afghanistan photos did so on something like the opposite condition.

Finally, the sad lost children of Breitbart belatedly weighed in with this Big Peace post making an argument that I can't quite follow. It is something like "the media and John McCain were mean to Donald Rumsfeld after Abu Ghraib which totally wasn't even a big deal and it wasn't Rumsfeld's fault so it it will be hypocrisy if they don't blame Obama for this thing."