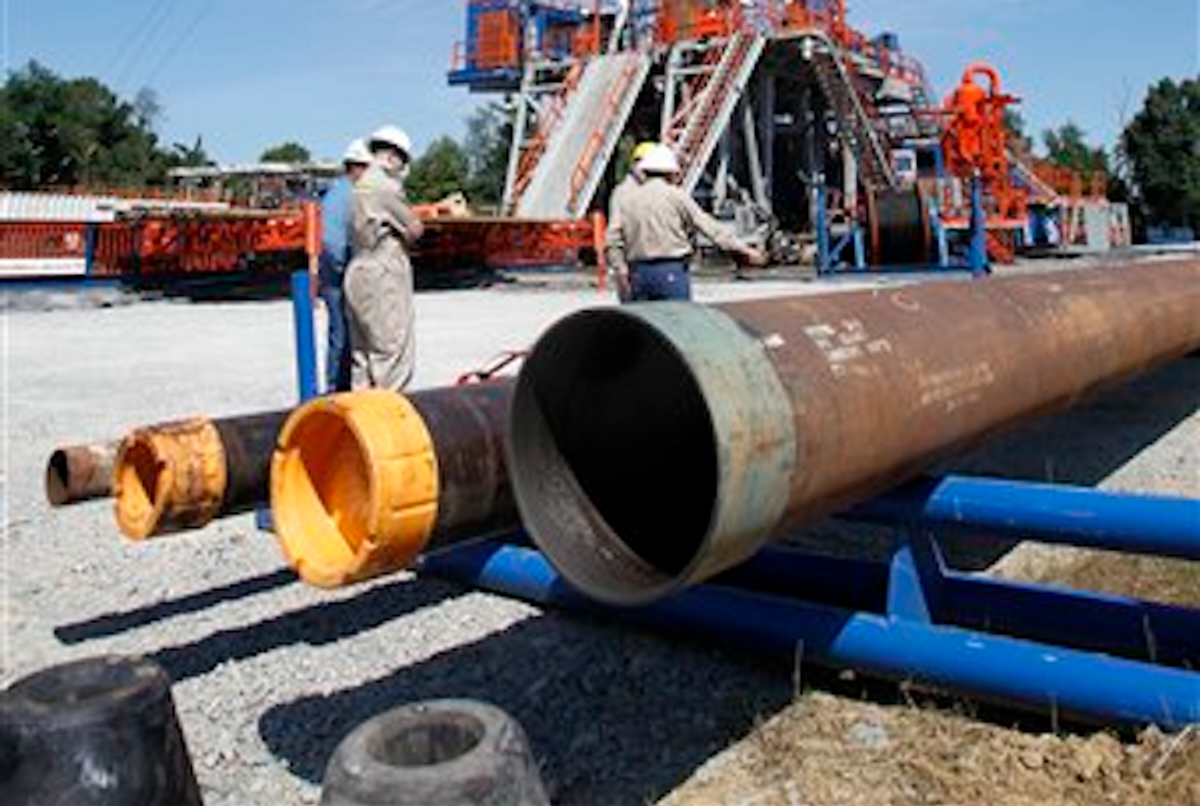 The Environmental Protection Agency issued the first-ever national air pollution regulations for fracking on Wednesday. First proposed in July 2011, the final rules have been welcomed by environmental groups as a much-needed initial move in reducing pollution and protecting public health from the toxic chemicals involved in the oil and natural gas drilling process. But many cautioned it was just a first step.

“It sets a floor for what the industry needs to do,” said attorney Erik Schlenker-Goodrich of the Western Environmental Law Center. “The reality is we can do far better.”

Over the past few years, more information has come out about fracking’s potential harms to the environment and human health, particularly relating to the risk of groundwater contamination. In addition to the many potentially toxic components of the highly pressurized fluid injected into the ground during the natural gas drilling process, fracking can also release cancer-causing chemicals like benzene and greenhouse gases like methane into the air. The federal government has made moves to tighten regulations, and we’ve chronicled the history of those regulations.

The EPA’s new rules don’t cover most of those issues. Instead, they address a single problem with natural gas: air pollution.

“These rules do not resolve chronic water, public health and other problems associated with fracking and natural gas,” Schlenker-Goodrich said.

The agency is actually barred from regulating the impact of fracking on groundwater because, in 2005, Congress exempted fracking from the Safe Water Drinking Act. Congressional proposals to give the EPA more oversight have so far failed.

With the new rules on air pollution, the EPA rejected an industry request to exempt some wells with low emissions of toxic compounds but did give drilling companies more time to comply. Notably, the final version provides a two-and-a-half-year transition period (rather than the 60 days in the original proposal) that gives drilling companies until 2015 to comply with the strictest regulations.

The industry lobbied hard for the delay, and its reaction to the rules have been mixed.

A spokesman for the American Petroleum Institute, the largest oil industry trade group, said it is still reviewing the new rules but said it's happy with changes from the original proposal that will allow companies to “continue reducing emissions while producing the oil and natural gas our country needs.” Another industry group told The New York Times that the rules are too strict and could “make exploring in new areas cost-prohibitive.”

A key rule targets one large source of air pollution — the burst of gas released during the first few days after a well is first tapped but before production begins. The EPA requires that companies start using “green completions,” a technology that captures the released gas and fumes in tanks and transports them via pipelines to be sold as fuel. (The Natural Resources Defense Council has a good breakdown of the process).

Many drilling companies already use green-completion systems. One natural-gas company recently told Bloomberg that the system doesn’t cost the company “any more than just venting the gas into the atmosphere.” The EPA says that once companies buy the necessary equipment to separate and collect the released gas, they could actually make up to $19 million a year selling the captured gas.

“By ensuring the capture of gases that were previously released to pollute our air and threaten our climate, these updated standards will not only protect our health, but also lead to more product for fuel suppliers to bring to market,” EPA Administrator Lisa P. Jackson said in a statement.

For the next two and a half years, in addition to trapping the gas, companies are allowed to burn off, or “flare,” the excess gas, which reduces air toxins but is wasteful because the gas can’t be resold. Peter Zalzal of the Environmental Defense Fund said the EPA rules give companies an incentive to adopt the green-completion technology instead of flaring.