Mitt Romney has been pandering to evangelical voters for months. Will he now connect these issues to his own faith? 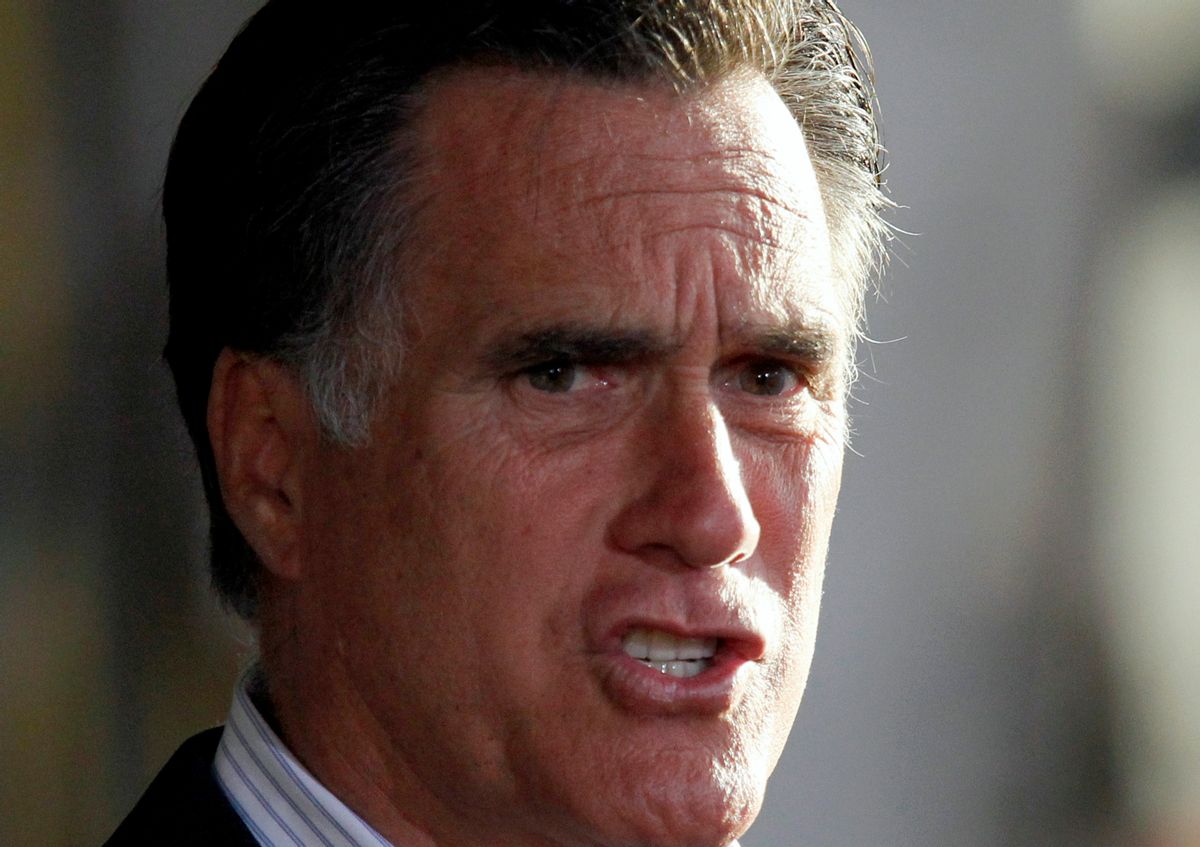 At first blush, Mitt Romney’s reluctance to talk about his faith might seem like a positive development to any supporter of secularism in presidential politics. But he’s only tight-lipped about his Mormonism, not about religious right causes, which he is more than happy to take up. Even when the teachings of his own faith intersect, quite neatly on matters of sex and gender in particular, with the theo-politics of the Republican Party, he’s more likely to defend the Catholic Church than his own. If the past is any guide, at his upcoming commencement address at Liberty University, he's more likely to invoke the religious right's "Christian nation" mythology than to talk about Mormon values.

Channeling the worst of Newt Gingrich and Rick Santorum, Romney has accused President Obama of trying to impose the “religion of secularism.” He has signed the pledge of the anti-gay group the National Organization for Marriage and accepted its endorsement, along with endorsements from antiabortion groups. He has stumped for the position of the U.S. Conference of Catholic Bishops framing insurance coverage for contraception as a “war on religion.” At the same NRA convention at which Ted Nugent reveled in violence against Obama and Democrats generally, Romney called contraception coverage under the Affordable Care Act a “threat and insult to every religious group.”

This transparent pandering is clearly aimed at the conservative evangelicals and Catholics he needs to energize in November, whose approval — and enthusiasm — is essential for a Republican presidential candidate to win. While Romney obviously doesn’t need to do much pandering to win over conservative Mormons, voters surely wonder: Once he brings up religion, where does his Mormonism fit?

Conservatives are starting to take notice of Romney’s mystifying refusal to highlight how Mormonism dovetails with their own ideology, leading some to suggest he should just “own” his Mormonism. Indeed you’d think that he’d take them up on it, since Mormon doctrine on motherhood, for example, shares some notable similarities with that of, say, the 19 Kids and Counting Duggar family, who stumped for Santorum (whom Ralph Reed says Romney should mimic), and have since thrown their support behind Romney.

Yet in the latest Mormon dust-up this week, the Washington Post’s conservative blogger Jennifer Rubin accused BuzzFeed’s McKay Coppins (who is Mormon) of anti-Mormonism after he wrote a piece, “Why Ann Stayed Home.” Coppins’ explanation of Mormon history and doctrine (and Mormon feminist objections to it) provoked Rubin, a Romney defender, to fret that it “foreshadows, I fear, of what is to come — effort to portray Mormons as weirdly out of step and unmodern, and by implication, Romney as being unfit for the presidency.”

Oh, but why single out Romney, or Mormonism, for being “weirdly out of step and unmodern”? It’s almost as if Rubin is unaware of what the Republican Party is.

The Daily Caller’s Matt Lewis came to Coppins’ defense, and even expressed admiration for Mormon ideals of motherhood. “I found the piece to be a positive portrayal of Mormon theology, motherhood and Ann Romney,” Lewis wrote.

That “positive” portrayal included a discussion of the late LDS prophet Ezra Taft Benson’s 1987 lecture on the role of women as mothers. In that “Fireside for Parents,” Benson echoed the teaching of former president Spencer W. Kimball, another LDS prophet, “whose counsel,” Benson said, “has gone unheeded, and families have suffered because of it.”

That counsel, of course, is that mothers should stay home. “The Lord has so stated,” Kimball wrote, that women “are to take care of the family,” and “be an assistant to the husband” but “not to earn the living, except in unusual circumstances.”

Kimball wrote those words in 1977, the same year in which the Church, in opposing the Equal Rights Amendment, worried that it would “stifle many God-given feminine instincts.”

“Too many women,” Kimball scolded, “spend their time in socializing, in politicking, in public services when they should be home to teach and train and receive and love their children into security.”

Tresa Edmunds, a co-founder of the feminist group LDS Wave and a blogger at Feminist Mormon Housewives, told me this week that in Mormonism, motherhood plays a divine role in nurturing souls for eternity. “Over the years, Mormon women have felt — I would personally say a backlash is too strong a word, I would say, some friction, about their role in motherhood.” For Mormon women who work, she said, there is still “static” and “stigma” over it.

Given that so much of Mormon teaching on marriage and family — the core of the religious right’s incursion into politics — is in line with Republican orthodoxy, one would think that Romney would jump at the chance to demonstrate a Mormon-evangelical-Catholic alliance.

As Kathryn Joyce, author of the book “Quiverfull: Inside the Christian Patriarchy Movement,” which details the anti-contraception, uber-mothering movement within evangelicalism, has reported, such an alliance already exists. Religious right doyen Francis Schaeffer, an important driver of the antiabortion movement, advocated for ecumenical “co-belligerency” decades ago, and anti-feminist, anti-secularist religious activists have heeded the call. “A chief example of this,” Joyce has written, “is ‘The Natural Family Manifesto’ ... [an] ecumenical call to arms [that] extols a conservative lifestyle where fathers lead and women honor their highest domestic calling by becoming ‘prolific mothers’ of ‘full quivers of children.’”

The unanswered question here is how much Romney adheres to his church’s teachings, and whether he agrees with the relationships some Mormons have forged with conservative Catholics and evangelicals on matters relating to the family, gender and sexuality. So far he’s jumped on the most obvious bandwagons of religious right causes. But as the campaign drags on, both progressives and conservatives will no doubt want to know more about where his own faith fits in the hot-button debates his party has placed front and center in the campaign.