Having led the movement to recall Scott Walker, labor is now throwing its weight behind the Dem who lags in polls 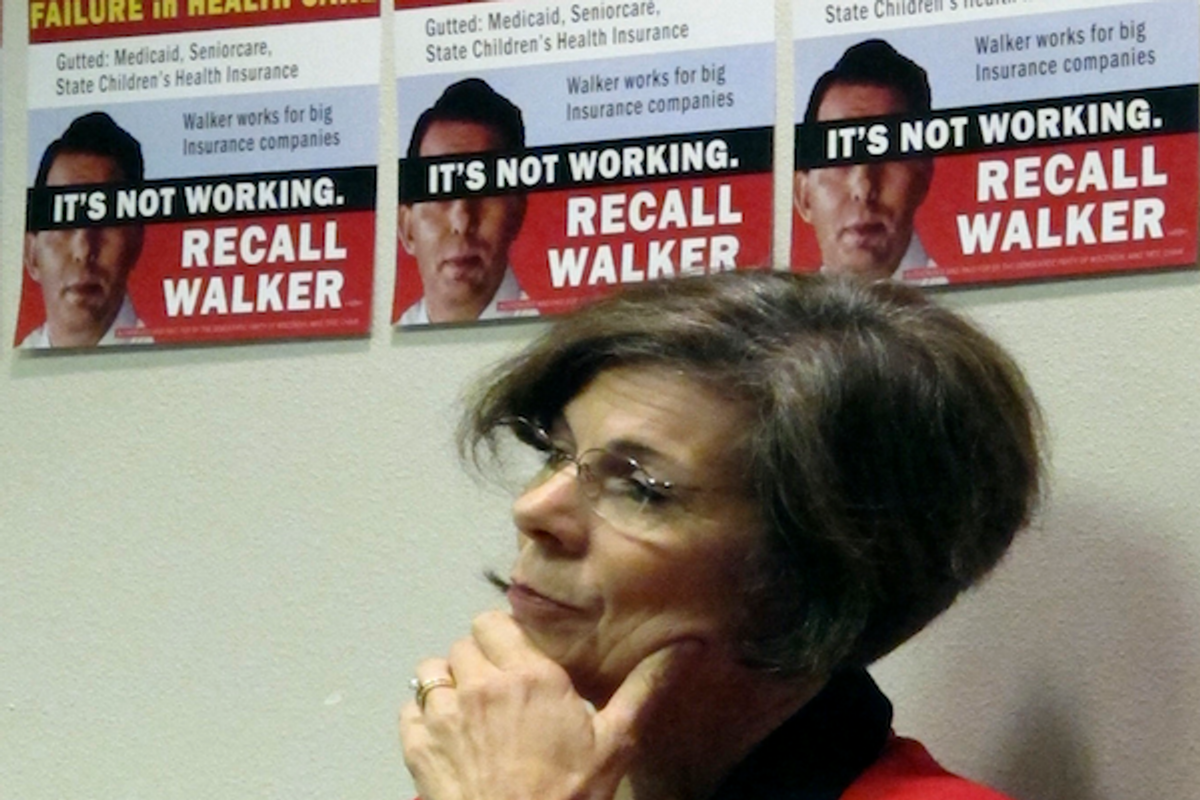 After Wisconsinites submitted signatures to recall their union-busting governor, labor leaders pledged not to settle for just “Anybody But Walker.” Last week, the state AFL-CIO made good on that promise. As a string of current and former elected Democrats lined up behind Milwaukee Mayor and Democratic primary front-runner Tom Barrett, the labor federation followed many of its major unions in endorsing former Dane County executive Kathleen Falk. Many labor leaders say Falk is more likely to beat Walker in the recall and reverse his policies once in office. But to get the chance, she’ll have to overcome Barrett’s 14-point polling lead before the May 8 primary.

Madison Teachers Inc. executive director John Matthews says the difference between Falk’s and Barrett’s plans for how to restore workers’ collective bargaining is “the key issue” in the primary. Falk, Barrett and the race’s two other Democratic candidates all say they support that goal. But even if Democrats retake the Governor’s Office and flip the state Senate, they may still have a Republican assembly to contend with. Falk committed early on to veto any budget that doesn’t include collective bargaining restoration, a move that SEIU Healthcare Wisconsin vice president Bruce Colburn praises as “very significant.” Barrett has said he would pursue the issue on multiple fronts, including calling a special session of the Legislature. Barrett Communications director Phillip Walzak says that a budget showdown would risk leaving the entire Walker budget in place. Falk campaign communications director Scot Ross says that in a special session, Assembly Republicans could easily decline to hold any votes.

Matthews, whose union has not yet endorsed a candidate, declined to say which approach he prefers. But he says that other unions erred by endorsing Falk early in the process, with insufficient member involvement, in an effort to “freeze out Tom Barrett.”

Barrett’s run was actively discouraged by some unions that had held union contract negotiations with both him and Falk. Marty Biel, the executive director of the Wisconsin State Employees Union, told Salon in February that he hoped Barrett would understand “why he might not fit the matrix of what a champion looks like.” In an April 7 statement, WSEU wrote that whereas Falk had a history of “working with our members to solve problems,” Barrett “wasn’t interested in working with us” to get a collective bargaining agreement signed in the weeks before Walker’s anti-union bill passed (in the same statement, WSEU acknowledged “poor judgment” in promoting a web video that implied Barrett had fully supported Walker’s bill). Wisconsin Education Association Council president Mary Bell says that Falk distinguished herself last year both by negotiating in good faith with union members to reach agreements before Walker’s bill passed and by traveling the state in support of recall efforts afterward.

But Barrett is on track to win the nomination. Wisconsin Democratic Party spokesperson Graeme Zielinski says that whoever wins the primary “will certainly be the head of our party, and will be directing our messaging and what we’re talking about.”  A poll released Monday from Public Policy Polling showed Barrett ahead of Falk 38 to 24 among likely voters. SEIU’s Colburn says that polling “shows there’s some ground to be made up,” but notes that Barrett has a name recognition advantage from his 2010 gubernatorial run, and led Falk by nearly twice as much in February.

Ross says that Falk’s endorsements from unions and other progressive organizations equal not just voters, but “people who will be out on the streets, knocking on doors and getting out the vote.” Walzak notes that Barrett has a few of his own local union endorsements, and says that prominent politicians backing Barrett “have their own networks they can tap into” to support him.

Sources from labor and both campaigns insist that the national media have exaggerated the bitterness of the primary. AFL-CIO secretary-treasurer Stephanie Bloomingdale says that while news reports play up “tension in labor” over the race, “We’ve read more about that on the newspaper online than we have actually seen on the ground in Wisconsin.”

But MTI’s Matthews says statements – or silences – from some of the unions backing Falk make him worry that they could sit out the general election against Walker if Barrett is nominated. Bloomingdale says that won’t happen: “I’ve heard that all the affiliates have made indications that they will support whoever gets through the primary.”

Last Thursday, in an Op-Ed almost perfectly written to flame the fears of Barrett’s labor critics, Barrett backer and former Madison Mayor Dave Cieslewicz wrote of Falk that “A candidate beholden to big unions is no more appealing to independent voters than one who answers to the Koch brothers.” Cieslewicz charged that while voters want an “independent” leader, “the unions seem to want to offer them Jimmy Hoffa instead.” He added that not having been endorsed by public sector unions could help Barrett’s campaign with independents. Asked about Cieslewicz’s column, the Barrett campaign’s Walzak said he saw it as an attempt to point out “a difference between rank and file union members” that may support Barrett, “and some of the leadership that are driving some of the political decisions.” The Falk campaign’s Ross said, “Comparing the working men and women to the Koch brothers … is an inappropriate, negative campaign tactic that doesn’t have any place in this race.”

Labor leaders reject the idea that distance from unions will be an electoral asset this year. “The issue is really going to be who’s going to come out and vote,” says SEIU’s Colburn. He warns that “unless people see this as something that’s going to really reverse what Walker’s done … people who have been involved, and are involved from the movement side, then they’ll be reluctant to participate, and even vote perhaps.”

WSEU’s Bell says that “the energy and the enthusiasm” are on Falk’s side, in both the primary and the general election. “In the end, the electorate is very divided.  And they’re looking for someone that they think can bring us back together.”