Obama's race to save the Rust Belt

Decades of bad industrial policies helped destroy the midwest. An old-school economic plan might be the cure 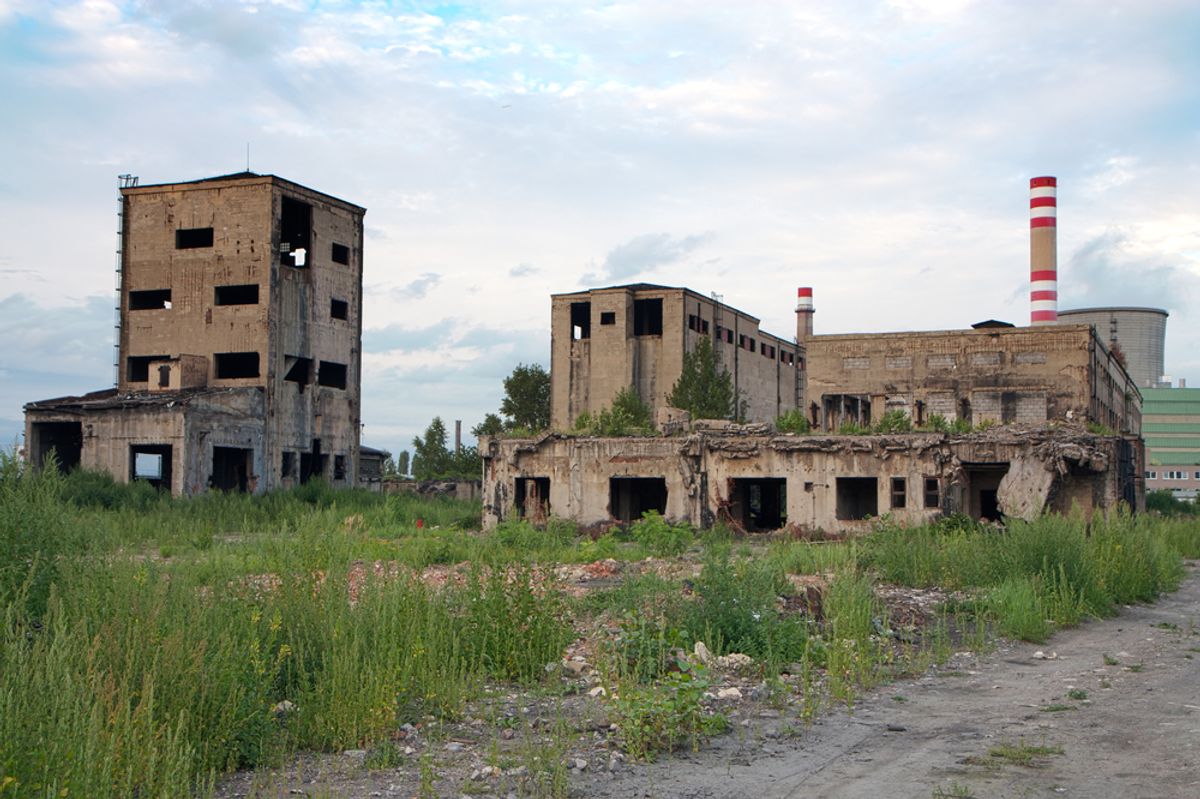 Now that the primary season is functionally over and Barack Obama and Mitt Romney have cleared their decks for battle, the silly season of American politics has truly arrived. The spin cycle has infinitely more attention to bestow on dogs-as-food versus dogs-strapped-on-top-of-cars, or retro attempts to pit working moms against stay-at-home moms, or the at-this-point-in-the-cycle completely meaningless innards of every new poll, than it does for sober arguments about economic policy.

And that's a real shame, because if you're looking for reasons to choose between Romney and Obama, the differences in their fundamental stances on economic policy deliver provocative grist. And not just because of the obvious -- the traditional rhetorical orientation of Democrats for government action versus Republican reliance on relatively unregulated markets. While Romney's economic plan offers nothing that is essentially different from standard Republican dogma dating at least as far back as Ronald Reagan, the Obama administration is giving us something new, a consciously articulated strategy dedicated to grappling with the profound changes in the global economy.

Last month, Gene Sperling, a top economic advisor to Barack Obama, gave a major speech on economic policy before the Conference on the Renaissance of American Manufacturing. The gist of the remarks: How and why the Obama administration planned to reverse the decades-long hemorrhaging of American manufacturing jobs. The details of how this would be achieved -- targeted tax breaks, investments in infrastructure and education, a tougher line on trade with China -- were arguably less important than the fact that the administration had decided to spell out an intellectual justification for the agenda. What's most interesting about Sperling's speech is how it breaks against recent Democratic resistance to industrial policy.

As an explicit, carefully researched defense of strong government action to promote the growth of the manufacturing sector -- aka "industrial policy" -- Sperling's remarks were noteworthy simply because most American economists scoff at industrial policy. If they are polite, they call it "distortionary" and argue that it inefficiently diverts resources and capital from wherever the invisible hand of free market capitalism deems most appropriate. If they're mean, they call it warmed-over command-and-control socialism and make nasty gibes about Solyndra, the failed solar power start-up that received a huge loan guarantee from the Department of Energy. But here was Sperling throwing down the gauntlet anyway, citing relevant economic literature and declaring, unambiguously, that there was a place for industrial policy in the Obama administration. Whether one agreed or disagreed with the economics, one could not ignore it as a meaningful expression of policy priorities.

In his speech, Sperling argued against the view that the decline in manufacturing's role in the United States economy is just as inevitable as the historical decline in agriculture's prominence. One of his main pieces of evidence is that the U.S. didn't actually start to lose manufacturing jobs until relatively recently -- around the year 2000. The manufacturing sector added 700,000 jobs between 1993 and 1999, he points out, while losing a whopping 6 million since 2000. "The dramatic loss of manufacturing employment in the past decade was a break from the past," said Sperling. The implication being: We can fix that.

Sperling doesn't say so directly, but by stressing the year 2000 as the turning point he's also making an obvious political point that favorably compares the Clinton administration (of which he was a part) to the Bush administration. But this is actually the weakest part of his speech. Because the great irony underlying Sperling's remarks is the indisputable fact that the Clinton administration was as responsible for putting in place the conditions for manufacturing job loss in the United States as any Republican administration. Both the Clinton and Bush administrations supported the neoliberal, pro-globalization "Washington consensus" of privatization and trade liberalization. Both didn't blink an eye at the decision of American multinationals to seek cheaper labor costs overseas. Both decided that expanded trade with China was more important than human rights abuses or the impact of outsourcing on American workers. And the Clinton administration, finally, had as little interest in explicit industrial policy as did the Bush administration. Never mind the particular date on which manufacturing job losses started to accelerate -- there's no getting around the fact that the job losses of the 2000s are in part a consequence of bipartisan decisions made in the 1990s.

One can conceivably argue that few policymakers at the time realized just how momentous the impact of the end of the Cold War, China and India's turn toward market-oriented capitalism, and massive technological advances in computing, networking and telecommunications would be. Looking back now, it seems obvious that adding a couple of billion cheaply employable workers to global labor markets would have had a dramatic impact on the developed world. But during the Clinton boom years, both Democratic and Republican policymakers went along with the consensus economic wisdom: All sides would benefit from increased trade. Sure, there would be winners and losers, but in the end, the net effect would be that all boats would rise.

And in one sense, that was true. The world is richer now than it was in 1990. A smaller percentage of the world's population lives in poverty. The extraordinary advances in living standards in Asia probably outweigh the relative decline of the middle class in the United States and Europe. If we focus on the world as a whole, rather than on individual nation-states, we can make a good argument that there are clear benefits from globalization.

But hindsight also tells us that those benefits were not distributed equally in the United States. The multinationals did fantastically well, and the top 1 percent of Americans prospered, but they did so at the expense of the 99 percent. Income inequality grew. Middle-class incomes stagnated. Manufacturing jobs disappeared. And Rust Belt America became increasingly angry.

In fact, one way of looking at Sperling's speech is as a political promise of help aimed at voters in crucial Midwestern swing states that have been hammered by globalization. This doesn't necessarily mean Sperling is being hypocritical. The Obama administration certainly believes that rescuing General Motors and Chrysler and spending stimulus money supporting electric battery development in Michigan (classic industrial policy) were good steps to take, both as economic policy and political strategy. (The sharp decline in Michigan's unemployment rate, from over 14 percent to 8.5 percent, offers solid evidence to support that view.) The point to note here is that changed circumstances resulted in changed policy. In the aftermath of all-out, no rules globalization, the Obama administration has decided that perhaps it is time to make a course correction.

And this is where the difference between Obama and Romney is most pointed. Romney's 87-page economic blueprint, "Believe in America: Mitt Romney's Plan for Jobs and Economic Growth," lays out a very familiar prescription of lower taxes and lower regulations as the cure for all of America's economic evils. He's all about defending the "free enterprise system" from unions and government bureaucrats and we've heard it all before. There's nothing particularly noteworthy about it -- it's standard Republican fare. But perhaps that is exactly what is most remarkable: Romney's prescriptions betray not one hint of understanding that a different world requires different strategies. Romney's platform is a lukewarm reformulation of exactly the same now-discredited Washington consensus policies that initially helped to put American workers at a distinct competitive disadvantage in global markets.

If there's one argument that comes through in Sperling's speech, it's that individual corporate actors acting in their own best interest in a free market can result in negative consequences for the larger society. The invisible hand can screw up.

For any single firm, the decision to move production elsewhere may make economic sense. But that decision impacts suppliers and the local talent pool. This makes the decision even easier for the next firm to leave and even harder for the next firm considering coming there to say yes ... For example, when we lost consumer electronics manufacturing, we gave up a claim on future innovation. We lost in follow-on products like advanced batteries, flat-panel display technology and LED lighting.

That's not an argument we would have heard Sperling make when he was deputy director of the National Economic Council under Clinton. But that's exactly what's so refreshing. As John Maynard Keynes may or may not have said, "When the facts change, I change my mind. What do you do?" The experience of the last few decades has given us loads of new data on what happens when industries move across borders. Sanity demands that we absorb that data and act upon it.