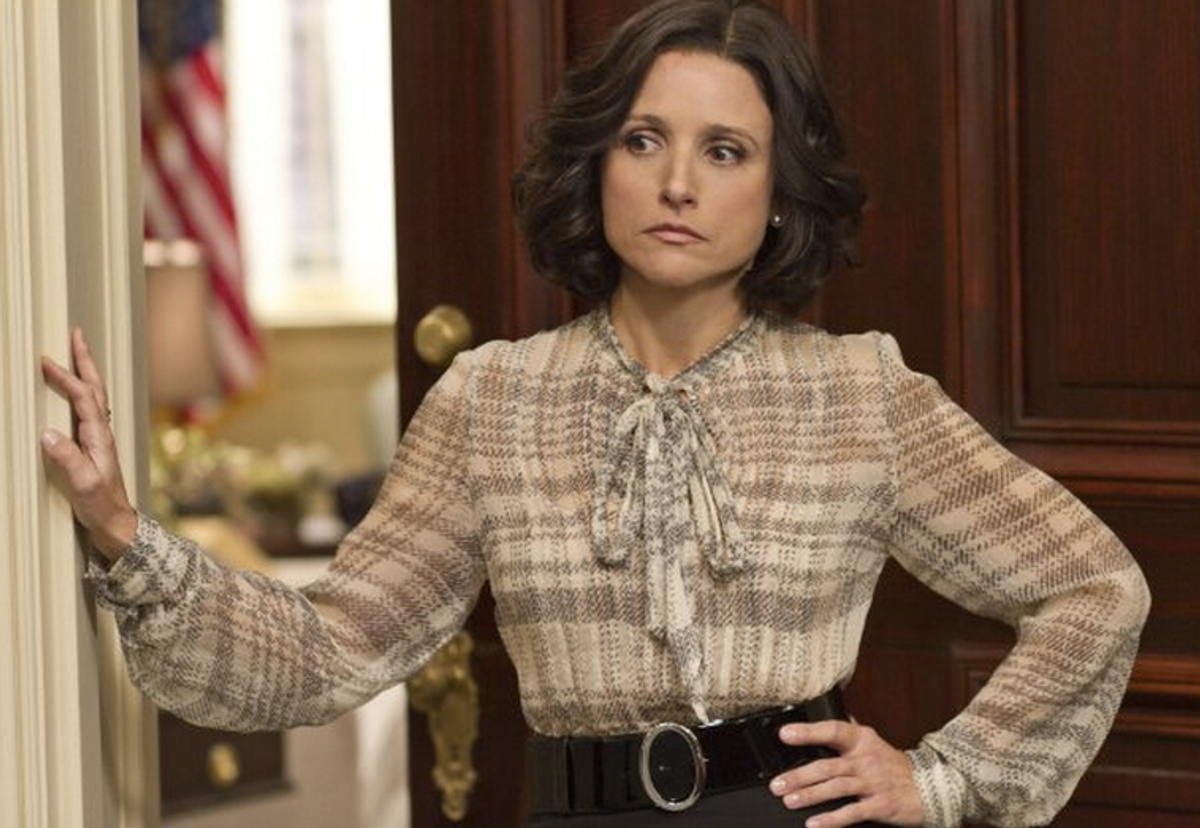 If anything proves that truth is stranger than fiction, it is the recently resolved Republican primary. If Herman Cain, Michele Bachmann or Rick Perry did not exist, could we have invented them? And, having invented them, would we believe them if they were to find their way into an HBO sitcom? These questions haunt HBO’s new comedy “Veep,” which is a very funny, sharp political satire that is not nearly as ridiculous as our actual politics. Set in the vice-president’s office and populated by a group of striving, cursing wonks bogged down with the inanities of everyday policymaking and image maintenance, “Veep” does not have a productive view of politics. But insofar as it doesn’t involve rancorous, bitter partisanship, it doesn’t have a particularly negative view of politics either. “Veep” may be the most cynical show about government ever made that is also a fantasy, albeit an impoverished one, about government.

Julia Louis-Dreyfus stars as Selina Meyer, a 20-year Washington insider and former senator turned vice president, a power player reduced to bystander, a Lyndon B. Johnson during the Kennedy years, but much, much, much better looking. (In a running joke, Meyer frequently asks the receptionist, “Did the president call?” He never has.) Louis-Dreyfus is flat out fantastic, sharp and shameless, desperate and authoritative, her comedic timing impeccable, her hair glossier than the pelt of the fattest, happiest otter ever seen glistening in the sun. Meyer has a legislative agenda —  filibuster reform, clean jobs — but it’s constantly waylaid by mini-crises, misunderstandings and jockeying. A kick-off event is undone by an errant tweet alienating the plastics lobby. A meet and greet at a yogurt stand by presidential heartburn and diarrhea.

Meyer’s agenda does not belong to either political party. To appeal to audiences on both sides of the aisle, “Veep” never names or alludes to Meyer’s political affiliation. (And it’s not simply because if Meyer were a Democrat that would alienate Republicans, and vice a versa. Given the level of incompetence in her office, which Meyer herself describes as “staggering” during a tantrum, it might alienate Democrats too.) While this decision is understandable, it also keeps “Veep” from setting its cutting eye on the craziest aspects of and characters in Washington. There are no idealists in Meyer’s office, but there are no ideologues either, and, at this particular political moment, that sounds like a trade up. Intractable bureaucracy, basic malfeasance and blind striving may be more common than fervid, intractable belief systems, but there are at least some zealots in Washington, and a behind-the-scenes show as defiantly clear-eyed as “Veep” defangs itself by not acknowledging their existence, let alone taking them on.

This is not to say that “Veep” has a sunny perspective on our nation’s capital. In the more typical version of the show, a brand-new, wide-eyed staffer would be introduced in the first episode, only to be schooled in the shady ways of Washington. Instead “Veep’s” new staffer is a slick opportunist (the charming, caddish Reid Scott) poached from another office and hired by Meyer expressly because he is an asshole.

It’s probably helpful to think of “Veep” as a workplace comedy rather than a purely political one. It’s created by Armando Iannucci, who is also responsible for the British political satire “The Thick of It.” (His Britishness may be another reason for the show's unwillingness to grapple with our country's political divide.) "The Thick of It," like “Veep,” owes a great debt to the original British “Office,” which in turn owes a great debt to another one of Iannucci’s creations, the status-obsessed, regularly cringe-inducing Alan Partridge. “Veep” may be set in the second most high-profile office in the land, but it is still an office. The banter flies fast and foul and often has to do with the habits of senators (though, in another running joke, those habits include a recently deceased senator’s tendency toward sexual harassment), but at bedrock the show is interested in manners, insecurity and the embarrassing, escalating social disasters familiar to anyone familiar with “The Office’s” David Brent. (Episode 2 ends with the Veep defecating herself, for example.)

As a workplace comedy with a political bent “Veep” is both fun and funny, its nonpartisan position more a missed opportunity than fatal flaw. So many of the details — the staffers constantly playing with their BlackBerrys, the cluttered offices — ring true. The dialogue snaps and crackles (“Glasses are like a wheelchair for the eye,” counts as a throwaway on this show) and if none of the characters curse quite as prolifically as “The Thick of It's” Malcolm Tucker, “Veep” nevertheless contains some of the best, most ecstatic cussing this side of “Deadwood.” Meyer’s staff is filled out with lively, well-drawn, oddball characters, including “Arrested Development’s” Tony Hale, more or less reviving the character of Buster, if Buster were a sort of savant with names. It also includes the most arbitrarily hated man since “Parks and Rec’s” Jerry, the presidential staffer Jonah, who gets insulted in a new and colorful way every time he walks in the door.  If there is no one quite as absurd as a former pizza CEO with a history of sexual misconduct and a campaign ad that could have been created by Lonely Island, well, there’s always next season.