He’s getting blown away among blue-collar white men, but it doesn’t have to cost him the election 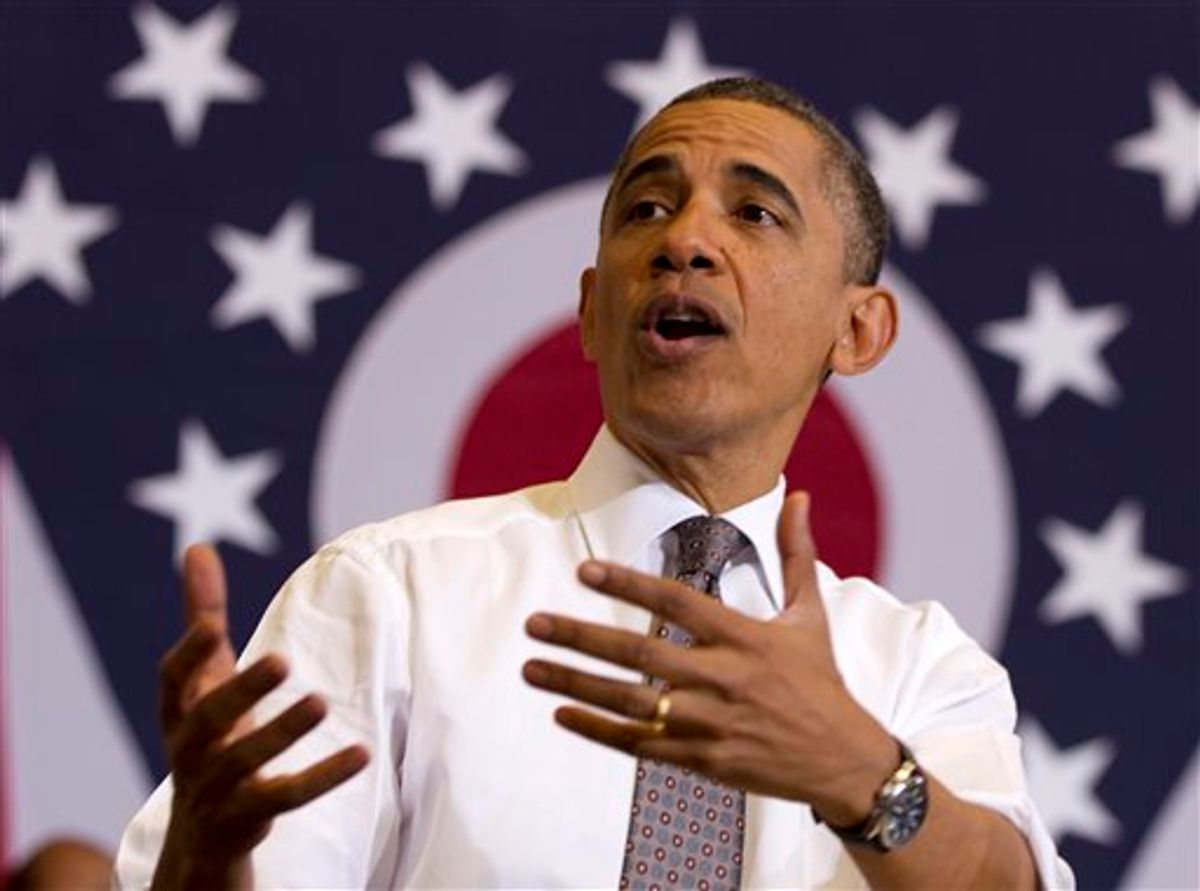 The flight of female voters from the Republican Party has attracted understandable attention, but there’s another factor in the gender gap that’s widened these past few months: men. Specifically, white men. And even more specifically, working-class white men.

Recent polls have found that President Obama’s support among all men is not where it was in 2008, when he edged out John McCain by 1 point among them, 49 to 48 percent. For instance, a Pew survey released this week put Obama 6 points behind Mitt Romney with men. Similar slippage is not evident among women, who favored Obama by 13 points in the poll – the same margin he enjoyed with them against McCain.

Nor is Obama’s drop among men playing out across the racial spectrum. He retains nearly universal support from black men and is crushing Romney among Hispanic men just as thoroughly as he crushed McCain. With white males, though, Obama trails Romney by 26 points, 60 to 34 percent, in Pew’s survey. In a Quinnipiac poll released Thursday, the spread is 21, 55 to 34 percent. By comparison, Obama held McCain to a 16-point margin among white men in ‘08, nabbing 41 percent of their votes – a better showing than either John Kerry or Al Gore managed.

And even among white men, there seems to be a divide, one that was apparent in the ’08 results but that has been exacerbated since then. According to an ABC News/Washington Post poll taken last week, Obama trails Romney among white men with college degrees by 13 points, 55 to 42 percent. This is comparable to ’08, when Obama also secured 42 percent of the college-educated white male vote. But with non-college-educated white men, Obama runs 29 points behind Romney in the ABC/WaPo survey, 61 to 32 percent. Pew also has him at 32 percent with these voters – 7 points worse than he fared with them in ’08. This is the source of the male portion of the gender gap.

By itself, Obama’s struggle with white working-class men is no surprise. Bill Clinton held his own with them in his 1996 reelection campaign, but they turned on Al Gore in 2000 and haven’t looked back since. The question is why Obama’s support among them has fallen so much.

The obvious explanation is the economy and general economic anxiety, which is presumably more pronounced among working-class voters. But if this is the reason, then shouldn’t Obama’s numbers be down just as sharply among non-college white women? Right now, there’s not much evidence that they are; some recent polls show him dipping slightly below his ’08 performance with this group, but others have him running even with or even slightly ahead of that pace.

It could also be that the blue-collar men have been more receptive (especially in the face of tough economic times) to the right’s unrelenting efforts to create culturally based resentment of Obama. Conservative leaders, news outlets and commentators have taken countless  opportunities to add to their preferred caricature of Obama as a radical leftist eager to settle old racial scores on behalf of black America. The more subtle voices have simply pushed the idea that there’s something distinctly un-American about Obama’s policies. It may be that all of this has had an effect beyond the hardcore Republican base.

Whatever the reason, Obama’s white guy problem is particularly ominous for his chances in a swing state like Ohio, with its large blue-collar population. The flip side, though, is that he may not be as damaged in swing states with more diverse populations -- Colorado, Nevada and New Mexico, for instance, where Hispanics account for a growing share of the electorate. This could create a path to victory for Obama even if he’s unable to win back any of the blue-collar white men he’s lost.

At this point, if Obama wins a second term, it will be despite losing to Romney among men and among whites. This doesn’t mean he can afford to write off blue-collar white men completely. But if he gets his clock cleaned with them and still prevails, it will speak to the advantage Democrats figure to enjoy as America continues to diversify in the years ahead.