The meaning of Orrin Hatch's nightmare 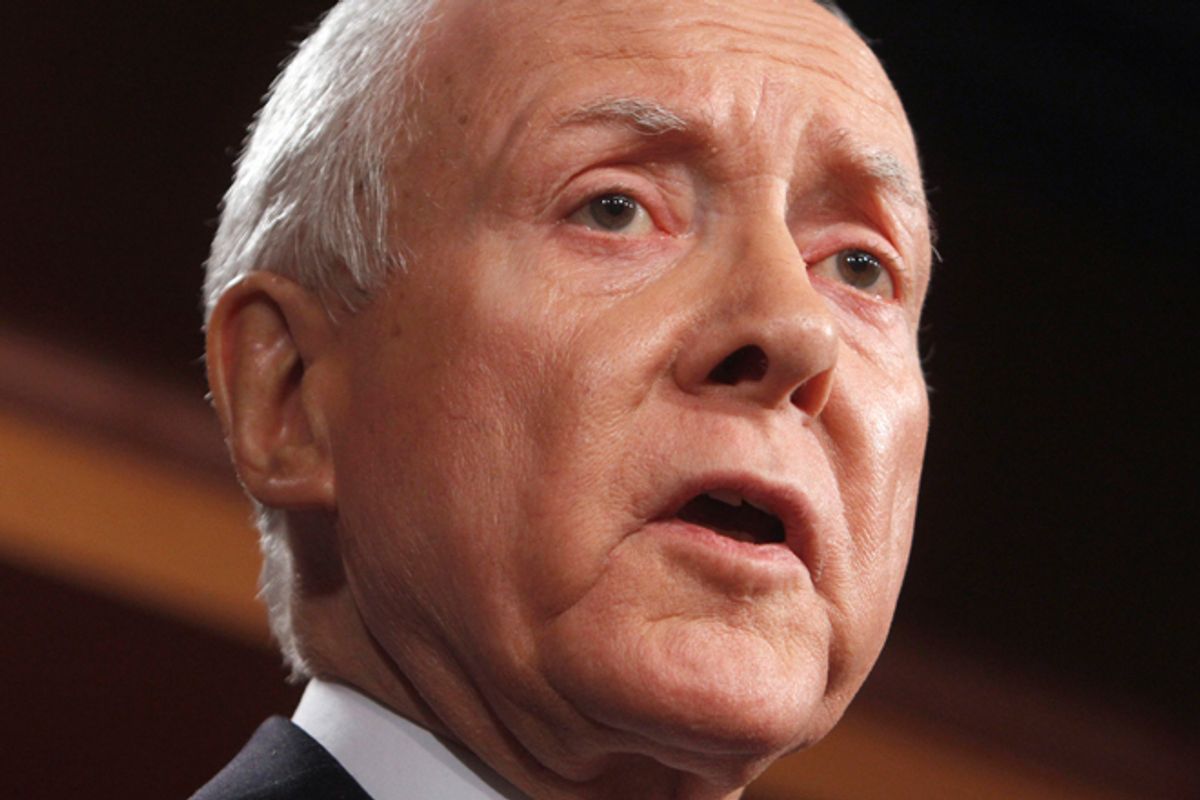 By the slimmest margin, Orrin Hatch failed at this weekend’s Utah Republican convention to ward off a contested primary.

With just 32 more votes out of the 3,908 cast, he would have cleared the magic 60 percent threshold and secured the nomination for a seventh Senate term on the spot. Instead, Hatch now has a date in the June 26 primary with Dan Liljenquist, a Tea Party activist and former state senator.

This marks the first time since he won his seat in 1976 that Hatch will face a primary, and he enters the race as the favorite. But the convention results point to a restive and volatile Republican electorate. Hatch spent more than $5 million in the run-up to Saturday’s vote, and yet the little-known Liljenquist still ended up with 41 percent. It’s absolutely possible that Hatch’s career will come to an end in June.

His struggle for survival is, in part, a reflection of the risk any politician takes in staying around too long. Hatch is 78 years old and has been in office since 1977. A simple desire for something new and different surely accounts for some of resistance he’s confronting.

But it also demonstrates just how dramatically the conservative movement has evolved in the Obama era. It may be hard to believe now, but when he first set out to run in ’76, Hatch played the same role Liljenquist is playing now – the unknown true believer rallying the conservative grass roots against the GOP establishment. Hatch was a 42-year-old Pittsburgh-born lawyer in Salt Lake City when he decided, just a day before the filing deadline, to seek his party’s Senate nomination. The initial response, from those who even noticed, was laughter. Party leaders were solidly behind Jack Carlson, a rising star who had served in the Nixon and Ford administrations, and he was assumed to have a lock on the nomination.

The Republican Party of ‘76 was defined by a broad and ultimately unsustainable ideological base. A civil war was erupting between a more moderate and pragmatic old guard and a deeply ideological conservative wing. Nationally, the clash was symbolized by that year’s marathon battle between Ronald Reagan and Gerald Ford. Hatch ran as a Reagan Republican, took a hard line on social issues, and railed relentlessly against the federal government. When his campaign against Ford was over, Reagan himself came to the state to campaign with Hatch, who crushed Carlson in the September primary, then won comfortably in November over Frank “Ted” Moss, a three-term liberal Democrat whose luck finally ran out.

In essence, Hatch was one of the faces of that era’s Tea Party. As a freshman senator, he ignored tradition and played a loud and leading role in the chamber. He was among the most vocal opponents of the Panama Canal treaty and almost single-handedly killed a bill championed by the Carter administration and organized labor that would have made it easier to form unions. Newsweek quoted a Democratic aide who called Hatch “extremely dangerous” for his legislative savvy.

By 1978, just two years into his term, Hatch was flirting with a presidential campaign, traveling to New Hampshire just after that year’s midterms – but backing down when it became clear that Reagan would run again. Back then, any suggestion that Hatch’s career would ultimately be threatened by a conservative revolt would have been absurd. He embodied the conservative revolt.

As the years passed, though, the party’s old liberal wing died out and Hatch’s conservatism became mainstream within the GOP. He settled into the Senate, began building cross-party relationships (most famously with Ted Kennedy), and developed an openness to compromise. When, for instance, President Clinton pushed for universal healthcare in 1993 and 1994, Hatch was one of the Republicans who proposed an individual mandate as a compromise. He also drafted an early version of the Dream Act, occasionally irked the pro-gun crowd, and backed the Wall Street bailout in 2008.

But while the partisan vitriol and ideological absolutism of his early Senate days disappeared, Hatch’s voting record remained reliably conservative. His lifetime rating from the American Conservative Union stands at 89 percent. For years, he remained in good standing with the right, shielded from primary challenges and unbeatable in general elections.

Barack Obama’s election in 2008, though, set off a purity crusade within the Republican Party, one partly defined by retroactive accountability. Whereas in the late ‘70s conservative activists sought to purge actual liberals from the party, the Tea Party-era right has targeted conservatives who are – or who recently have been – willing to compromise with Democrats on the occasional big issue. Suddenly, Hatch’s ACU average certified him as a sellout, and when Bob Bennett, his fellow Utah senator, was ousted at the 2010 state convention, Hatch woke up. Since then, he’s renounced his TARP vote, pretended he didn’t actually support an individual mandate, boosted his ACU score to 100 percent, and readopted the strident tone that marked his early days in politics.

This, along with the $5 million he’s spent so far and months of exhaustive grass-roots politicking in Utah, was enough to spare Hatch the convention humiliation that Bennett endured two years ago. Whether it will also be enough to save his job remains to be seen.