Technology and education, says Timothy Noah. But unemployment and the rules governing wages may matter more. 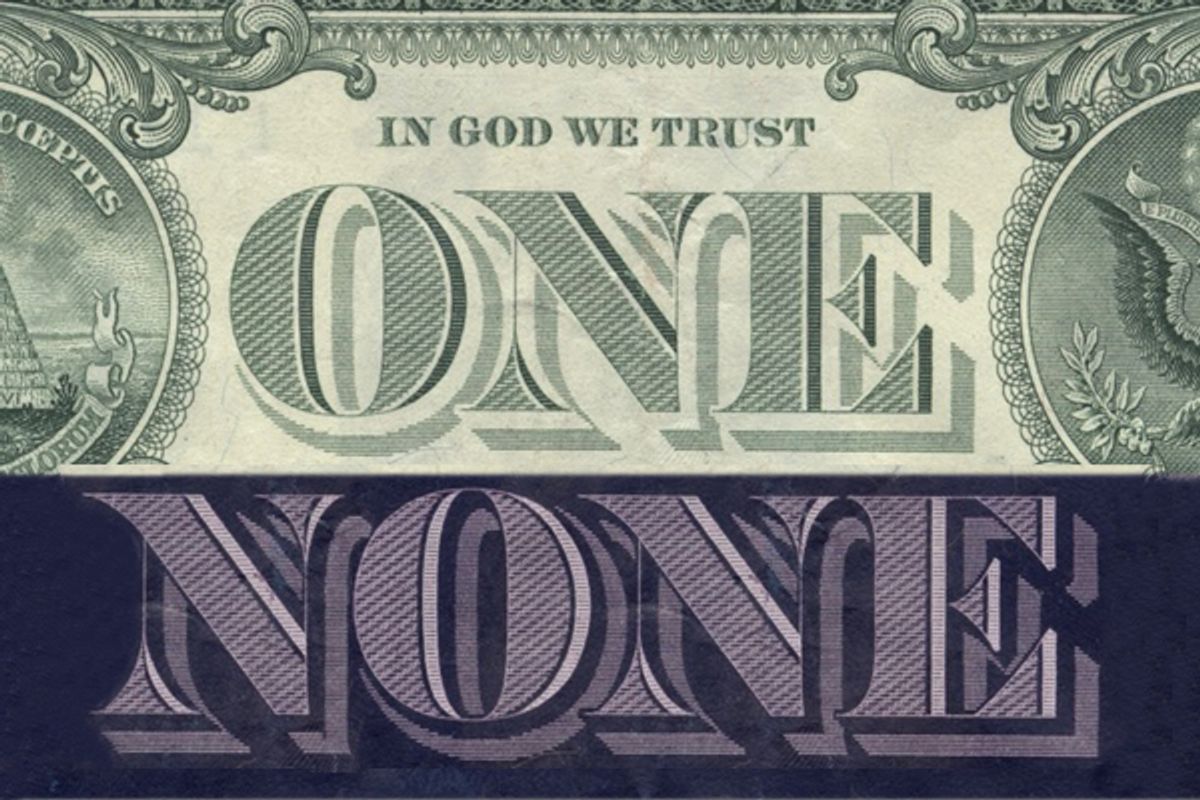 Timothy Noah has written a graceful book on income inequality in America, based on his prize-winning 2011 series for Slate. And "The Great Divergence" is well-timed: it emerges just as inequality is being transformed, via crisis and stress, from an academic backwater into a leading issue of the age.

More precisely Noah gives us a survey of the work of academic economists on this topic, and his book has the advantages and some limitations of that genre.  Among the advantages are a neutral  tone and a balanced treatment of many controversial questions. A limitation is that the surveyor brings nothing of his own to the table – neither critical perspective nor new information. This is a very good book about what other people think.

After preliminaries dealing with mobility, Noah, a staff writer at the New Republic, offers a short discussion of race, gender and family structure. He takes it as a given that civil rights, female liberation and changing marriage norms did not actively bring about income changes for the groups involved in those movements.  Instead, Noah accepts the prevalent view of economists that larger forces were at work and that minorities, women and families were affected by, but not principal actors in, the drama of rising inequality.

What were those forces? For Noah's sources, the labor market is the primary scene of the action. Here wages are buffeted by the forces of demand and supply. On the demand side, the big forces include technology and trade; on the supply side, they are mainly education and immigration.

As Noah relates, the Harvard power couple Claudia Goldin and Lawrence Katz have argued that increasing wage inequalities are due mainly to “a race between technology and education.” In their view, technology raises inequality by increasing the demand for skill; education lowers it by increasing the supply.  Thus, rising inequality in the first and last decades of the last century was due to rapid technological change and lagging education, while the “Great Compression” in the middle of the century happened largely because education caught up.

This story is far more controversial than Noah lets on.  Quite apart from the fact that we do not have a good measure of technological change – so we cannot really say when it was fast and when it was slow –  the idea that technology favors the skilled worker is not obviously correct. Noah does not mention the dissenting views of (for instance) David Card of UC-Berkeley,  John DiNardo of the University of Michigan, or Robert Z. Lawrence of Harvard.  As for the effects of education, in a 1999 article in Research in Economic History, Thomas Ferguson and I examined American wages in fine detail from 1920 to 1948. We found that the fluctuation during those years could be explained entirely without reference to schooling.  Moreover, to state the obvious:

During World War II, the enormous rise in wages of the truly unskilled workers who toiled in agriculture and on the public roads owed nothing to any Roads Scholarships program. [It] was the effect, surely, of demand, spurred by record public deficits, and the absorption of some ten million men into uniformed government employment. And the result was an almost perfect inversion of Protestant ideology and conventional thinking about education and labor markets, for the prime beneficiaries certainly included many millions of workers who were functionally illiterate and possessed of the very  lowest educational credentials of all.

Economists sometimes strain at gnats while swallowing camels. Noah does credit the effect of the WWII wage controls in fashioning the postwar world, but he overlooks the fact that since those vast changes more than explain the great equalization of American wages that occurred, there is no need to appeal to high school graduation rates for a second cause.

In the 1990s, “skill-biased technological change” was a preferred mainstream explanation for rising wage inequality, while liberals tended to blame rising trade. Yet those making the case that trade was the culprit also had a hard time finding proof. The difficulty, according to Noah, was that America's main trading partners were also high-wage countries. NAFTA helped make Mexico into a significant exception, and then along came China and India. The result was that in the 2000s, several prominent economists – including Paul Krugman and Alan Blinder – began to argue that off-shoring (including of services) had become a major threat to jobs and wages. How big a threat? Noah assigns just 12 to 13 percent of the Great Divergence to trade, but he does not say where this number comes from or what, exactly, it applies to.

Immigration also seems to have been small beer. The fact that a new labor supply doesn't change wage rates was nicely demonstrated by David Card at the time of the 1980 Mariel boatlift, which deposited 125,000 low-skilled Cubans on Miami. As Noah writes: “Card observed no impact on wages at all … even  among low-skilled native-born workers” (emphasis in original).  Needless to say, some economists were still unpersuaded; the grip of theory is powerful on the mind.

Noah's accounts of these studies is fair and lucid. The difficulty comes in making an assessment. The conclusion I'd draw (and in fact drew, many years ago) is that supply-and-demand is a poor model for explaining inequalities in pay. Wages are rigid! Some recognition of this does exist, and so political explanations – for example, the great shift in “norms and institutions” under Reagan – have attracted attention.  Noah devotes two chapters to them, one of which is on taxes and the other of which is on unions.

The Reagan-era cuts in income tax rates – up to and including the Tax Reform Act of 1986 – seemed like a big favor to the rich at the time. But Noah (following, as always, his economists) argues that they could not have caused the rise in income inequality, for they do not account for the rise in the pretax income shares of the very rich. In my view, this is too quick of an assessment: It overlooks the fact that lower tax rates induced corporate executives to take their compensation in private income as against perks. We should thus expect that it was a powerful force behind the CEO pay explosion that occurred at the same time.

The other problem is that the Tax Reform Act redefined adjusted gross income for top earners so as to increase what they reported. Thus, a significant part of the rise in pretax income inequality – the part the data show to have occurred in 1986-87 – are accounting changes. The twist here, is that removing this “data break” from the series somewhat lowers the measured increase in inequality that forms the core narrative of a “Great Divergence.”

The collapse of unions was no doubt important from any viewpoint,  but here one has a skein of contending causal forces.  How much should one credit the overtly political attack? And how much, perchance, was due to Paul Volcker's war on inflation – a topic to which Noah devotes only a few words? It's possible the principal force was not the destruction of unions as such but rather the destruction by monetary policy of jobs through the rise of interest rates and the dollar, which brought on the recession and the fall of the unions. And if that's true, then outsourcing is also not an independent factor, but rather just another consequence.

In support of this view,  there is the fact that pay inequality in American manufacturing actually peaked in 1983 and fell back once interest rates dropped and the recession ended. This is easy to miss, partly because income-tax data reflect the changing structure of households, which continued through the 1980s.  Pay inequality did not rise again until the recession in 1989, and after 1994 it once again declined quite sharply. By 2000, inequalities in the structure of pay had fallen a lot, which helps account for the very low poverty rates, including for minorities, in those years.

What happened?  The answer jumps from a chart: Inequality in the structure of pay, measured as weekly earnings of the manufacturing workers, tracks the unemployment rate. It is a macroeconomic phenomenon, driven largely by the extra hours that low-paid workers are able to work in booms as well as by the short-time they suffer in slumps. It follows that the focus on supply-and-demand forces that are supposed to affect hourly wage rates – such as technology and education – is largely a waste of effort.  What matters is the state of the economy and the rules governing wages.

Meanwhile, if you do want to compress wages and earnings, it's quite possible.  There is a proven method – a simple, direct, effective measure. Actually, there are two of them.  One is to pursue full employment. The other is to raise the minimum wage.  In his summary chapter on policies, Noah does talk about unions, but he doesn't mention the minimum wage.

Inequality in incomes rose sharply in the late 1990s, a phenomenon Noah describes as the rise of the “really stinking rich.” And he rightly calls attention to the bankers and fund managers and other denizens of Wall Street. But in thinking about how these incomes rose as they did, a chart can again clarify matters. Clearly it's another macroeconomic phenomenon, related in this case to the stock market. Pay follows unemployment; incomes followed the NASDAQ right up to the peak in 2000, and  beyond.

And as the data will show eventually, the Great Divergence in incomes ended (for now) with the tech bust. Since then the pattern has been down, up, down and up again –  both in the run-up to and in the wake of the Great Crisis. Which, interestingly, also gets no mention here.

In short, this is a valuable book. The beef I have with it is that, in surveying academic opinions, Noah reflects the views of the people he read and spoke with. And since they aren't interested in macroeconomics, he isn't either. That's a loss.