Grandin on the autism surge

Temple Grandin tells Salon what the new numbers mean to her, and why increased autism awareness isn't always good 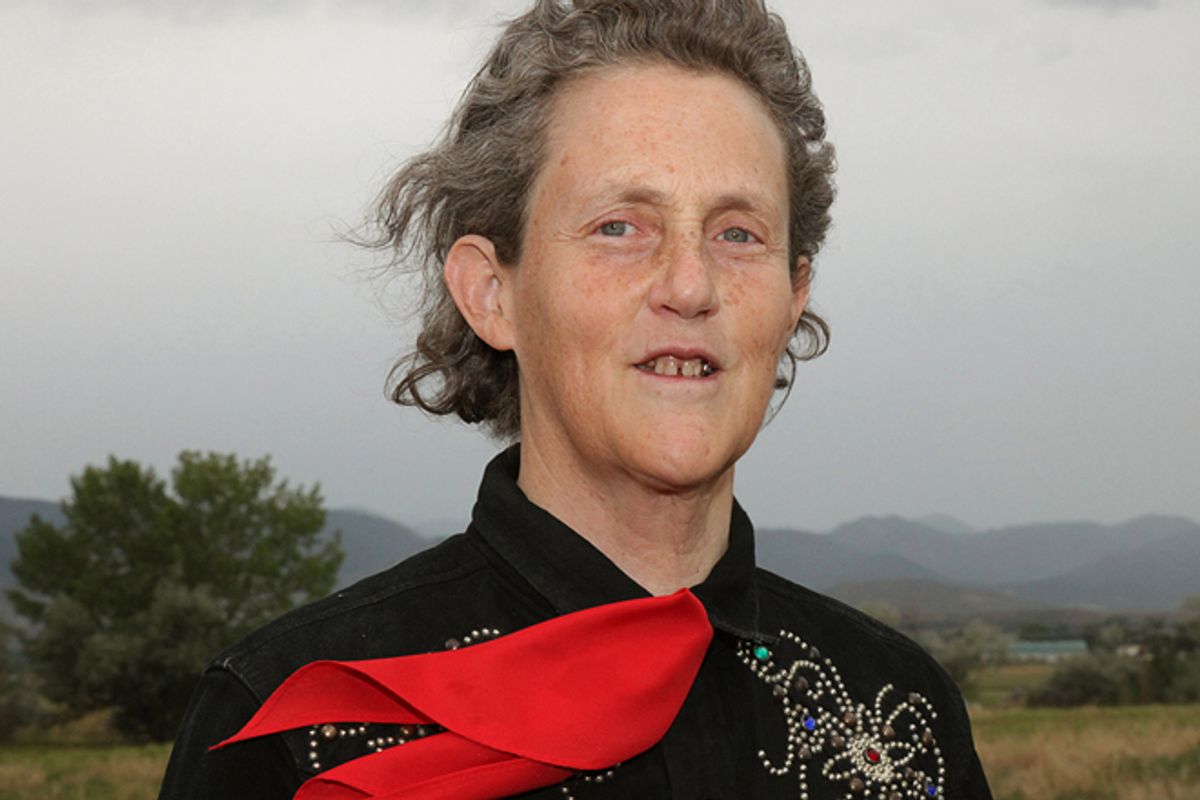 In the last few weeks, new autism figures have created widespread controversy among American parents. In early April,  the CDC released its latest, shocking report on the disorder, which showed a massive uptick in the number of diagnoses -- according to the numbers, one in 88 children and one in 54 boys are now on the autism spectrum. That's an astonishing 78 percent increase since 2002. In the weeks since, pundits and doctors have spent a lot of time debating what these changes actually mean: Are they due to increased detection, loosened definitions of autism or are we in the middle of a genuine upsurge in autism among American children? As Dr. Thomas Frieden, the director of the CDC, told reporters, this change may "entirely the result of better detection. We don’t know whether or not that is the case."

For Temple Grandin, the country's most high-profile autistic person, this news is a source of both relief and concern. Grandin was diagnosed with autism at the age of 2 and didn't speak until age 4, but went on to become one of the country's best known authorities in livestock facility design. (In 2010, she was the subject of a well-received HBO biopic, "Temple Grandin.") Grandin is also the author of several books, including, most recently, "Different ... Not Less," a collection of inspiring personal essays by people on the autistic spectrum who are also gainfully employed. The collection, she tells Salon, was meant to inspire young people with autism to attain successful working lives.

Salon spoke to Grandin over the phone about the newest autism numbers, the problem with autism awareness -- and what the government can do to help parents with kids on the spectrum.

The CDC recently released a shocking report that showed a huge uptick in autism numbers. What do you make of it?

I’m very familiar with those figures. One big question that’s come up is: Has autism increased on the mild side of things? I don’t think so -- they’ve always been here. Some of this is increased detection. I’ve worked with tons of people that I know who are on the spectrum -- but now I think severe autism has really increased. There may be environmental contaminants. I read an article the other day that a supposedly very harmless pesticide on cattle was making bulls infertile, so this brings up the issue of genetics.

There is some concern that by expanding the numbers of people with autism, the CDC is diluting the autism diagnosis.

The problem with these diagnoses is they’re not precise. They’re talking about changing the DSM and replacing it with Social Communication Disorder and they’re sitting around in rooms discussing it. It’s not a precise diagnosis like tuberculosis. You show certain behaviors, like social awkwardness, or fixated interest or repetitive behavior, and that’s labeled autism. But it’s a very big spectrum. On one hand you’ve got people working in technology jobs and on the other hand you’ve got someone who’s nonverbal with epilepsy, and that’s one of the big problems. Steve Jobs would probably be on the spectrum, and so would Einstein.

On the other hand, this newly expanded number may also make a lot of parents of kids with autism feel much less alone.

I think that’s really important. When I was young my mother was totally alone. It would have definitely made a lot of difference. She would have had other parents to talk to in a support group and none of that existed in the '50s.

Nevertheless, while people have been talking a tremendous amount about autism and Asperger's in recent years, you suggest that's not been entirely productive for children with autism.

To a certain extent it’s a good thing. On the other hand, you get to the smart kids who could go have successful careers in Silicon Valley getting held back by labels. One kid goes to Silicon Valley, the other stays home to play video games, and they’re the same geek. I visit people in [autism] meetings, and a 9-year-old will come up and want to talk about his autism. I’d rather talk about his science project. You get fixated on your favorite thing as a kid, and now kids are getting fixated on autism instead of dogs or medieval knights. I’d rather get them to fixate on that something that could give them a career.

Is that the reason why you put together an essay collection like "Different ... Not Less"?

The thing that motivated me to to put it together is seeing way too many people with high functioning autism and Asperger's not getting jobs and making transitions to adult life. Having worked in a technical field my whole adult life, I think, “Where are the aspies?” I think about people I went to college with, the geeky kids, different kids. One of the things hurting people with Asperger's today is they’re not being taught social skills from old people on the spectrum who managed to be employed their whole life.

So we got about 25 entries [for the book] and I picked half of them. Some of them are people well known in the autism field but I also wanted to have a wide variety of people. They had to be employed their whole life and have an actual diagnosis, but they all had childhood jobs, they all were bullied in school, and I wanted to show that to young people on the spectrum. I didn’t fill it up with happy people in Silicon Valley. There is a person who is a tour guide, a doctor, a psychiatric aide, retail clerk, advertising executive. There’s a real big variety of people, and they talk about how the diagnosis helped them to understand their problems.

There was one person who was a computer lady. Her dad died and she was devastated by that. She got diagnosed because she got depressed. Her boss asked her, “If you’d gotten the diagnosis when you were younger, would you have achieved what you achieved?” The problem with some of the young people on the spectrum is that parents are reluctant to push them out of their comfort zone, and they’re unemployable. I wanted to show in this book that we can succeed.

The same week the new CDC figures were released, another study found that mothers of autistic children are 56 percent more likely to be under the poverty line. Why do you think that is?

Autistic children are very difficult to take care of, especially severely autistic ones. When I was 4 I had almost no language; when I was 3 I had none at all. It’s much more work for the mother of an autistic child to have a job, because working with an autistic child is such a hassle until they go to school. Then it might be easier, but there are still likely to be more interruptions and things, and a mother might be restricted on what she can do in terms of travel.

What do you think needs to be done in order to change that?

My mother’s been working with a group called Families Together. For a family that has severely autistic kids, the divorce rate is through the roof. [Families Together] put on weekends where families meet up and they get the whole family working together so they don’t get so frazzled and fall apart. That’s a huge issue.

Should there be more government support for parents with kids on the autism spectrum?

Parents need to have respite so they can go out to a restaurant and have some time off. That’s a huge problem for parents. And then there’s the cost of therapy, a lot of schools have only two hours of speech therapy per week. If you talk with these kids when they’re very young, 20 to 30 hours a week with a good teacher, that improves the prognosis. But then you also need better services for adults. If you’ve got a non-verbal adult, what happens after he’s 21 or 22 and he ages out of school? That’s a huge problem, especially for severely autistic adults.