The first time he ran for president, he liked green power. What changed? 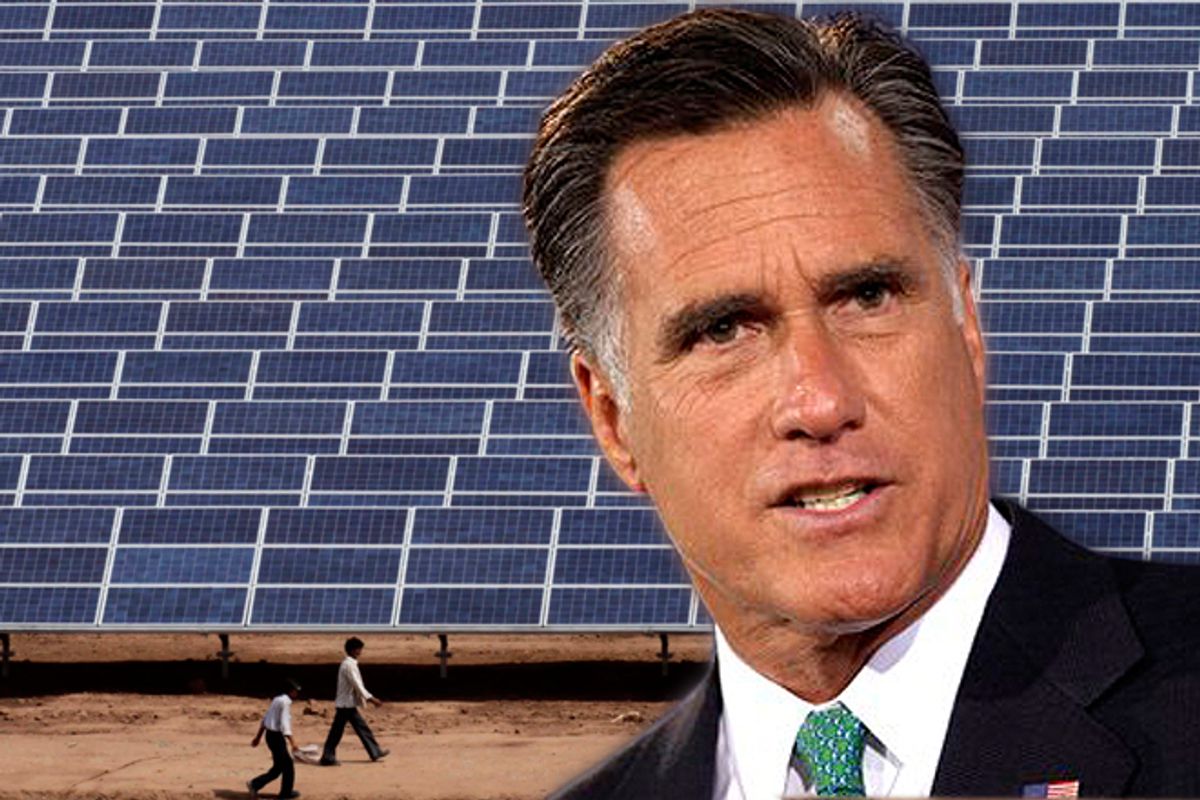 In February 2007, in his very first presidential campaign visit to New Hampshire, Mitt Romney toured a solar power plant. Unsurprisingly for a politician in such a location, he found some nice things to say about renewable energy.

North Andover's Eagle-Tribune reported that Romney promised he would soon "lay out a full energy program" featuring government incentives for developing alternative energy -- including solar and wind power. Romney anticipated such "incentives will foster technological breakthroughs that can speed up" the development of alternative energy, reported the paper.

Romney said he came to the plant with questions about the long-term impact of solar power, but was pleased to find out the cost is dropping and affordable solar energy could be available in the United States in six to eight years. He also said he was encouraged to hear much of the firm's business comes from overseas. He suggested U.S. policy-makers take note of the fact that Japan, China and Korea are investing in solar power.

"You're doing spectacularly well," Romney told company executives and employees. "You're helping to change the world."

Today, Mitt Romney isn't quite such a fan of changing the world with solar power, if we are confident enough to believe his campaign website: "...Green technologies are typically far too expensive to compete in the marketplace...The failure of windmills and solar plants to become economically viable or make a significant contribution to our energy supply is a prime example."

Of course, back in 2007, Romney also believed that climate change was man-made and supported a global cap-and-trade system to limit greenhouse gas emissions. Now he says "we don't know what's causing climate change on this planet" and "I do not believe in cap-and-trade." So it shouldn't be all that much of a shock that Romney is giving the cold shoulder to solar power. If there's one thing we know about Mitt, he never allows his past positions on an issue to weigh him down.

But in the wake of the news that one of the U.S.'s biggest solar power start-ups, First Solar, is laying off 30 percent of its staff and closing some factories, along with the well-publicized woes of other, government-aided solar power companies, it's worth asking: Is Romney right? Has solar power been a disappointment?

Let's start with some facts. In 2005, two years before Romney's visit to New Hamsphire, the world had about 4.5 gigawatts of installed solar power capacity. As of the end of 2011, that number had jumped to 65 gigawatts, with 27 gigawatts deployed in that year alone. Another 27 gigawatts is expected to go online in 2012. For a graphic illustration of that growth, just go to Gujarat, India, where the largest solar power plant in the world -- 600 megawatts, covering 5000 acres, or the size of lower Manhattan -- was switched on this week.

Solar power has also never been cheaper. According to a report released in April from the McKinsey Group, since 2008, the price of solar power photovoltaic panels has fallen 40 percent per year, and is projected to continue to drop by about 10 percent a year through 2020. Installation costs are also falling. In some parts of the United States, solar power is already cost-competitive with other forms of electricity generation.

Critics of solar power point out that the drop in price and increase in installed generating capacity are the result of Chinese overproduction and government subsidies. The scaling back of subsidies in Europe and the United States will, they argue, result in supply far exceeding demand, which may continue to push prices down in the short-run but calls into question the long-term profitability of solar power manufacturers. California's success at reaching grid parity, as seen through this prism, is the artificial result of a combination of California's aggressive incentives for renewable energy, China's over-production of panels and federal subsidies. Take out the subsidies, wait for the inevitable Chinese crash and, well, Romney will be proven right -- solar power still isn't ready for prime-time.

The counter-argument holds that falling prices will generate increased demand. The more competitive solar power becomes with electricity generated by burning coal or natural gas, the easier it becomes to switch to solar -- and the less the industry will require government subsidies. In this scenario, solar power panels have become a commodity amenable to economy-of-scale mass production, which is bound to push prices down even further. The competition will be brutal, and there will be many more bankruptcies along the way, but the survivors will flourish in a steadily growing market.

The irony is that we might already be close enough to the point at which solar power can stand on its own that government support may not really be necessary to assure its long term growth, making the whole debate over Romney's flip-flop moot. The tragedy is that the countries that will benefit the most from the maturation of the market for solar power will be those -- China, Germany -- who poured the most resources -- private and public -- into the industry, and stayed steadfast, while those who abandoned the market after a few high-profile bankruptcies will be left on the sideline. And the absurdity is that Romney was probably right in 2007 -- the cost of solar power has dropped massively since then, is affordable, and government incentives probably can boost technological advances, but wrong in 2012, when he says green power isn't viable.

From a must-read story published by Bloomberg:

In October, Bangalore-based Simpa Networks Inc. installed a solar panel on Anand’s whitewashed adobe house along with a small metal box in his living room to monitor electricity usage. The 25-year-old rice farmer, who goes by one name, purchases energy credits to unlock the system via his mobile phone on a pay-as-you-go model.

When his balance runs low, Anand pays 50 rupees ($1) -- money he would have otherwise spent on kerosene. Then he receives a text message with a code to punch into the box, giving him about another week of electric light.

When he pays off the full cost of the system in about three years, it will be unlocked and he will get free power.

Or tell it to Obama, who, unlike Romney, has remained consistent in his support for solar power over the years, even in the face of the embarrassing Solyndra debacle. The president visited his own solar power plant in March.

At the Copper River Solar Plant in Boulder City, Nevada, Obama told reporters "This is an industry on the rise... It's a source of energy that's becoming cheaper."