He's an asexual icon for traditional cultural conservatism, boring his way into the hearts of millions 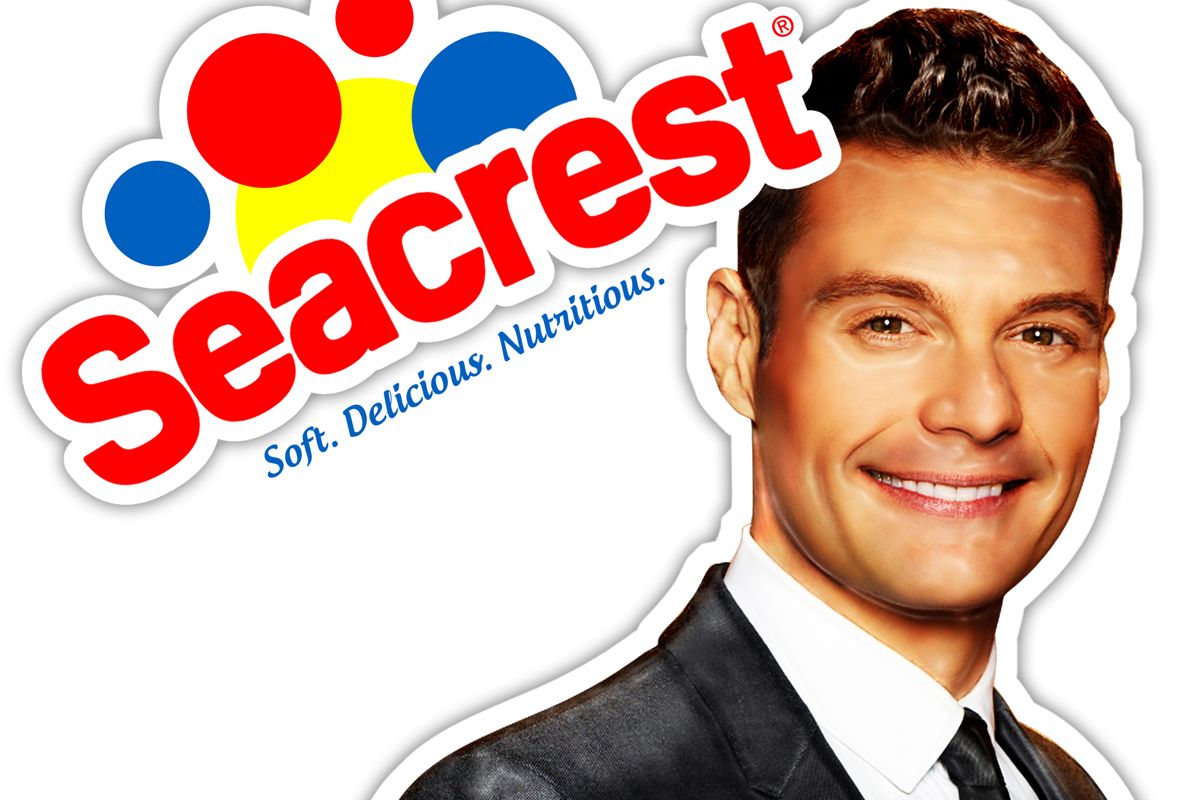 Imagine, for a moment, that Dick Clark had died in 2002 instead of 2012. How would his obituaries have been different? In most ways, there would have been little change. In the last decade, Clark has continued with the ventures he'd been known for, hosting and producing a New Year's Eve broadcast, various radio programs, game shows and TV specials. But there would have been two big differences. The first thing was Clark's 2004 stroke, and his courageous return to public life despite a speech impediment modulating his famous voice.

And the second? The second is Ryan Seacrest.

Seacrest appears in Clark’s obits like the Boswell to Clark's Samuel Johnson, quoted instead of family members as the apparent authority on Clark's life and legacy. His tribute to Clark on “Idol” the night after his death became a news story in and of itself. For years, Seacrest had been slowly positioning himself as the new Dick Clark, taking over as the host of the New Year's broadcast when Clark was ill, and modeling his career after Clark's by taking ownership stakes in radio shows and TV ventures. Seacrest has become so entwined with Clark's story that when news of the death broke, it was hard not to picture Seacrest kneeling in some dark rite, screaming to the heavens as Clark's power possessed him, “Highlander”-style.

The problem with this image is that it's far too interesting to have anything to do with Ryan Seacrest, a man who has made a career out of being professionally boring. If we're going with a sci-fi reference, it's easier to think of him like the bureaucrats in “Brazil,” toiling away in some back office, looking up briefly as an intern arrives to tell him the news, nodding curtly, shedding a single tear, and immediately returning to work. (During his tribute on "Idol," he said that Clark was "in a better place saying, 'Hey, let's get on with the show, OK?'") Seacrest is not someone who does dramatic things in fields. He is a person who stands in places of no place and intones blank words like a priest performing some long-deprecated rite. And he's been very, very successful at it.

Seacrest's extraordinary rise, so counter to the prevailing trends of the time, points to a current of artistic and social conservatism in the mass audience that persists despite the relentlessly progressive story we like to tell ourselves about the march of culture.

Like Clark, Seacrest got his start in radio. Clark's early jobs were in an industry where local was king, getting spots at small-bore stations in upstate New York and only going national when "Bandstand" was picked up for TV distribution. Seacrest, however, came to radio just as it was being deregulated and local stations were being eliminated in favor of national conglomerates like ClearChannel. As such, he was able to move to Los Angeles and, at the age of 20, take over a morning radio show that became nationally syndicated. He followed that up with his own form of conglomeration, taking over the weekly "American Top 40" from Casey Kasem in 2004, and launching his own new programming ventures, like "On Air With Ryan Seacrest," a four-hour block he records daily and which is distributed to more than 150 stations nationwide.

But his big break was "Idol." Premiering in 2002, it at first seemed an unlikely phenomenon. Why would anyone want to watch a "Star Search" where the contestants didn't change? The country did not lack for pop stars, after all: Between "Total Request Live" and Radio Disney we were experiencing something of a bumper crop in those years. The success of "Idol" speaks to both the unalloyed effectiveness of its format and something deep in the national mood at that moment. Bathed in post-millennial anxiety, and eager as always to avoid discussing the possible causes of and responses to a national tragedy, "Idol" seemed to reflect our best selves. It was meritocratic (the best will win, regardless of their social position), individualistic (only single singers, no messy bands), populist (the people vote), and aggressively cheerful.

Key to that success was Seacrest. The judges represented the business aspect of the transaction, the reward at the end. The voters were America, of course. But Ryan was the Idol. For struggling amateurs, he was the end product they were training for, smooth, professional and unchallenged, a perfect pop product encased in a suit. While the contestants' images varied, Seacrest's presence on stage was a constant reminder of what the producers had in mind when they talked about a pop star.

There have long been rumors that Seacrest is gay. It's hard to know what to do with these, exactly, but there is something undeniably unsettling about his sexuality. The image he projects is that of a non-threatening teenage boy, a pre-pubescent heartthrob like Ricky Nelson, David Cassidy or Justin Bieber. But Seacrest, who has dated Teri Hatcher and Sheryl Crow, is decidedly post-pubescent. He is, as they say, a grown man. Merv Griffin, who hired him to host a children's computer-themed quiz show called "Click!" in the mid-'90s, said that "he had this spiky haircut, and we knew all the little girls in the audience would love him, and they did." And they do. And he doesn't care. Which is, maybe, a big point in his favor.

But it's a point against the audience. All teen idols grow up, and as moral panicky as the process can be ("I'm Not a Girl," etc.), we've seen it happen enough times now to know that part of the pleasure of a non-threatening teenager is knowing the threat they will inevitably become; Justin Bieber is fascinating because we want to see how it all spirals down. For Seacrest to stay in that neuter state reflects a childish, eyes-closed denial of reality among those audience members who still like it. The last decade has seen a remarkable opening of public discourse about all kinds of sex; currently the news media is tirelessly (and tiresomely) covering a story that basically amounts to "Hey, some people like bondage!" Adult sexuality is at least an option for our public conversations now, and lots of openly gay celebrities have remained idols in their own way, able to publicly pursue relationships without having to maintain the facade of blank sexlessness. But if Seacrest, the Delphonic seer of conventional wisdom, is in fact gay (or sexual at all) and truly thinks breaking face would kill his career, then maybe he's right. For all the recent gains we've made, there's a sizable portion of our fellow citizens who would much rather have Ricky Schroder stay a boy. Whether you want to have Seacrest or be him, he is selling the troubling fantasy that desire doesn't have to be dirty.

Throughout a decade in which celebrity scandals were everywhere, Seacrest himself remained steadfastly above the fray. The scandal boom was great for entertainment news, but unstable workers are bad for the entertainment business. Scandal-plagued actors may get more publicity, but they make it a lot harder for a production to get insured, and the harder it is for the talent to hit their marks, the longer it takes to make the product. You never had to worry about that with Seacrest. A tireless worker and consummate professional, a morality clause would just be superfluous for any contract you might want to strike with him. In a decade of turmoil, Seacrest was the rock, the thing you could always depend on.

But since when has good TV been about dependability? The fun of watching "Idol" is its anarchy, whether it's Paula's looseness and Simon's free-form contempt, an unknown amateur maturing into a star or flaming out under pressure, or the direction of each season, which producers, for all their tinkering, ultimately leave in the hands of the audience. “Idol,” at its best, is a show that can genuinely surprise everyone. In the midst of that glorious chaos, Seacrest stands apart, a stable center. His ability to parlay that personality into lucrative positions on other shows indicates that stability is what a certain portion of the audience wants. And that's worrisome.

During an authoritarian period in American politics, culture was the lone bright spot. It seemed to be rapidly democratizing: corporate conglomerates were failing, user-generated content was everywhere, and even highly controlled mediums like TV were expanding their offerings to become far more adventurous. But no shift brings everyone along with it, and as easy as it now is to find people who like "Mad Men," cultural progressives are haunted by fears about what everyone else is watching. Maybe, like Glenn Beck said, we really are surrounded; certainly a lot of people seemed to watch "Two and a Half Men." Seacrest is like your square brother who went into banking: His success makes you wonder if the cultural power you feel when you're with your people is really all that strong. Despite the fact that Ryan Seacrest has never done anything even slightly objectionable, people hate Ryan Seacrest. And that's why.

"Idol" has, inevitably, begun to wane in influence and audience. As the paying audience for pop music massively declined during the '00s, "Idol" had been able to stay ahead of the curve by making it about competition and narrative rather than music. But that audience had broken down too, splintered into niches by the expanding array of entertainment options. This should have spelled doom for Seacrest, eternally a mass-market guy. But he saw it coming, saw that the family-friendly audience he served would soon just become one market among many, and formed Ryan Seacrest Productions in 2006. His major hits so far have all involved the Kardashians, but he just signed a big new deal with Comcast, and more could be on the way.

If Dick Clark is an eternal teenager trapped in a ‘50s image of adolescence, Seacrest is a teenager from 2002 who's persisted across time, simultaneously trying to please parents and safely experience more sensual pleasures from the standpoint of a moment when America had a serious interest in being pure and virginal. He's achieved this by splitting his personality across business ventures, appearing as a squeaky-clean host on TV and radio while using his production company to push delightfully trashy reality fare like "Keeping Up With the Kardashians." When we look at Ryan Seacrest, we see innocence; when we look at Ryan Seacrest's productions, we see naughtiness framed as a secondhand experience. A man so averse to scandal that he takes pains to present himself as asexual, Seacrest is one of the few remaining examples of television's "Least Objectionable Programming" doctrine, a remnant of the era of mass audiences. His particular evil genius has been to recognize that you can do just this but for every audience. Give the family hour what it wants, give the late-night gossipers what they want, and keep it all firmly separate with plausible deniability.