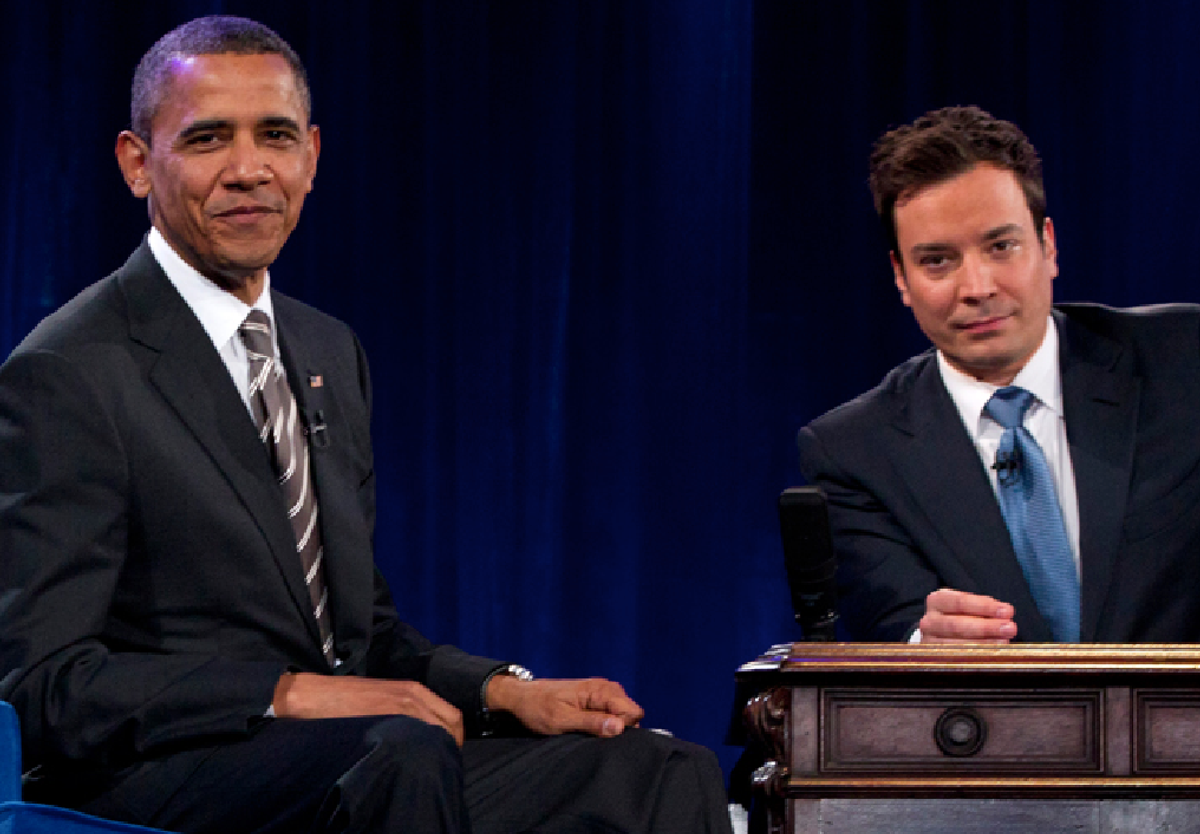 President Obama went on Jimmy Fallon last night, officially to make a case for not raising the interest rates on Stafford student loans, but really to continue his incredible run of appearing in charming musical numbers. Obama joined Fallon and The Roots on stage at the University of North Carolina at Chapel Hill to “slow jam the news,” a recurring Fallon sketch rejiggered for the president. Obama, who came out smiling to a standing ovation, introduced himself and then explained, “I too, want to slow jam the news.” He then delivered a very straightforward pitch about why interest rates on student loans shouldn’t go up. It could have been part of any speech, except for The Roots' backing track.

Fallon then popped up in the foreground — leaving Obama in the fuzzy mid-ground and The Roots in the back — to crack the joke, “You should listen to the president, or as I like to call him, the Prizzy of the United Stizzy.” (Black Thought added: “The right and left should join on this like Kim and Kanye.”) Obama kept a straight face through most of the song, cracking a big smile only at the end when he added an "Oh Yeah” to the assertion that he’s “The POTUS with the mostest.” When the song was over, he dropped the mic.

The president is exceptional in these kind of light comedic situations, where his innate stiltedness serves him well. He’s willing to play along, which is endearing and self-deprecating, but there’s always a part of him that remains aloof -- as if, all things being equal, assuming he weren't the president or on the campaign trail, this is the sort of thing he would just as soon not do. He gets the joke, but his inner reserve keeps him from becoming one. Even when he’s goofing, it’s with rectitude.

Fallon is a great foil for this sort of presidential composure: Compared to the sunny, giggly Fallon and his goofball persona, Obama comes across not only as unflappable and adult, but cool. At one point, Fallon told Obama he thought it would be funny if Obama were to take staged pratfalls down Air Force One's stairs. After humoring Fallon for a few minutes (Obama is probably more aware than Fallon that falling down the Air Force One steps -- then being mocked mercilessly by Chevy Chase -- helped do in Gerald Ford’s second term), Obama just deadpanned: “I don’t think that’s funny.” Ice.

Two other takeaways from the interview: Obama said that he and Michelle finished paying off their own student loans just eight years ago, in 2004 -- when Obama had just been elected to the Senate. The president also told Fallon that he laughed at a clip from the Comedy Central sketch-comedy show "Key & Peele" in which Obama was given an "anger translator” who took his calm, composed comments and translated their angrier meaning. (An example of Obama as run through the anger translator: "Mahmoud, Kim Jong, I think I already done told both ya'll 86 yo shit bitches, or I'll come over there and do it for ya'll! Please test me and see what happens.") Take a look at that sketch and wonder if that is, in fact, what Obama really means.