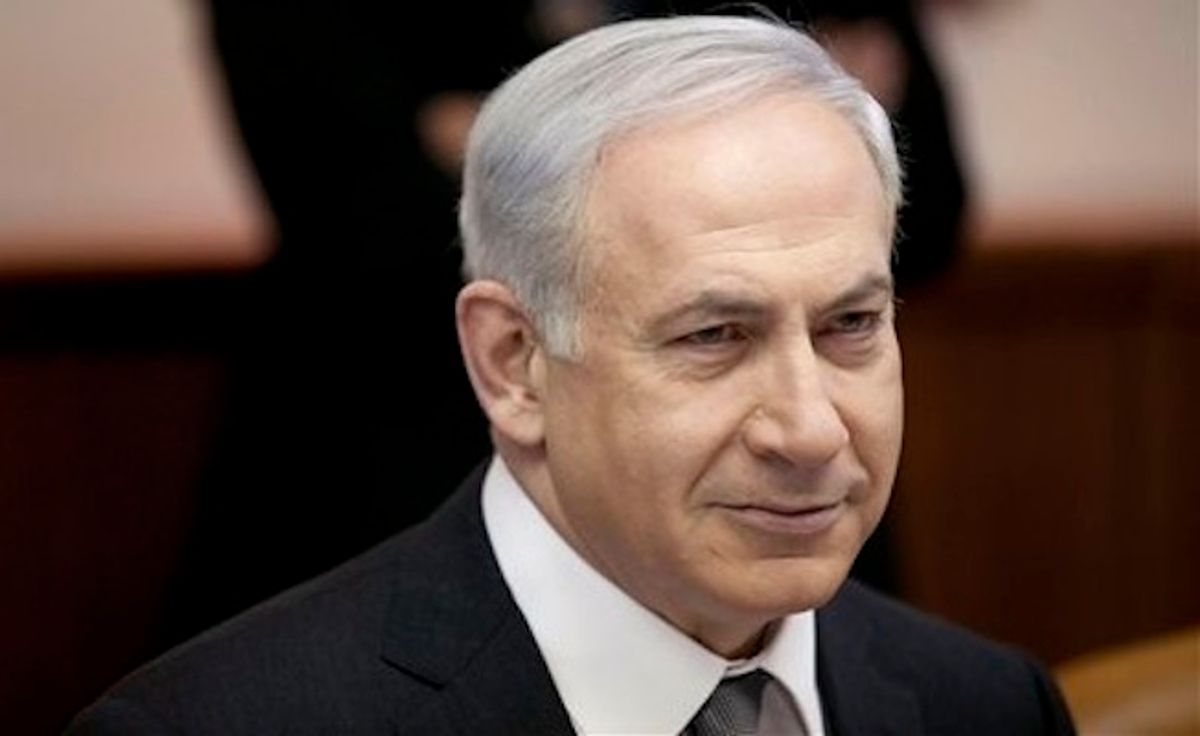 Following the conclusion of last week's talks between Iran and Western powers, for instance, Netanyahu publicly complained that the five-week gap between each summit amounted to no more than "a freebie" for Iran to continue developing its nuclear capacity unimpeded.

A growing cadre of Israeli political analysts view Netanyahu's posturing on Iran as part of a long-term pre-electoral strategy — he faces mounting threats against the stability of his coalition.

Alon Liel, a 30-year veteran of the country’s foreign ministry, where he once served as director general, told GlobalPost he believes the Iranian issue is expedient for Netanyahu both internationally and domestically. Abroad, he is vulnerable to accusations that he is not moving toward peace talks with the Palestinians. Internally, he needs to shore up his right flank ahead of elections.

"In Netanyahu's political circles, and even beyond that, it is very comfortable for him to lift the issue of Iran to high decibels. He needs to address internal political realities and consolidate an Israeli consensus, and also, internally and externally, to postpone the Palestinian issue,” he said. “He is much more comfortable talking about the Iranian danger than he is addressing the crisis with the Palestinians."

Leil said that Netanyahu is "earnestly" concerned by the possibility of Iran developing into an existential threat to Israel, but thinks most of the rhetoric is aimed to serve his re-election campaign.

“I personally am much more frightened by the silence of the Palestinians than by the verbal back and forth between Obama and Netanyahu," he said.

"Now, the clock is ticking. And I've been very clear to Iran and to our negotiating partners that we're not going to have these talks just drag out in a stalling process. But so far, at least, we haven't given away anything — other than the opportunity for us to negotiate and see if Iran comes to the table in good faith," Obama said. "And the notion that somehow we've given something away — or a 'freebie' — would indicate that Iran has gotten something. In fact, they've got some of the toughest sanctions that they're going to be facing coming up in just a few months if they don't take advantage of these talks."

“The promptness and resoluteness of the U.S. response suggests that [if] Israel had reservations, [they] should have been conveyed through quieter channels. Mr. Netanyahu's reaction gave the impression of a major divergence in U.S. and Israeli positions where one may not really exist," he said.

American officials went out of their way to assure the Israeli public that their prime minister had been informed of every facet of the Istanbul talks ahead of time, while they were under way, and after their conclusion.

Netanyahu is juggling a number of challenges ahead of elections next year. Like many in the international Occupy movement, the organizers of last summer's massive wave of social protests in Israel are gearing up for a renewed effort this season.

Also, senior political allies such as Deputy Prime Minister and former Chief of Staff Moshe Ya'alon are growling at Netanyahu from the right, threatening to bolt from his government if he complies with a Supreme Court order to evacuate illegal Jewish settlements in the West Bank.

Many Israeli ministers say they are resigned to the government's collapse well before the scheduled date for elections, in late 2013.

Amos Yadlin, a former chief of military intelligence, took the unusual step last week to calm any talk of a possible Israeli strike against Iran, telling Israel Army Radio that "even if Iran achieves the capacity to make a bomb, I don't think the first thing they'll do is launch a bomb against Tel Aviv."

Many Israeli analysts dismiss the squabble on Iran as mere posturing for the benefit of the media, positing that, behind the scenes, Netanyahu and Obama are coordinating a united front — or that Netanyahu is simply playing for local votes.

"Five weeks is not the end of the world," Iran expert Meir Javedanfahr told the Israeli website Times of Israel, dismissing Netanyahu’s complaint about the time between negotiations.

Liel said Netanyahu "is a spin master with a genius for PR, a real master. The last thing he wants, for example, is for the UN to take up Palestinian demands, or the ticking time bomb of the settlements. He wants quiet on that front. And the best way to get that silence is to raise the tone of the Iranian issue."

"He needs to present the Israeli public with an achievement on the Iranian issue and he needs it soon. The prime minister hears not only the ticking of the Iranian atomic clock; last summer's clamor from Tel-Aviv's Rothschild Boulevard also echoes in his ears. It was the lowest point of his second term, with his ratings plummeting and Likud ministers talking openly about losing the next elections."