The key to winning swing voters: Never, ever let them think about what the economy was like before Jan. 20, 2009 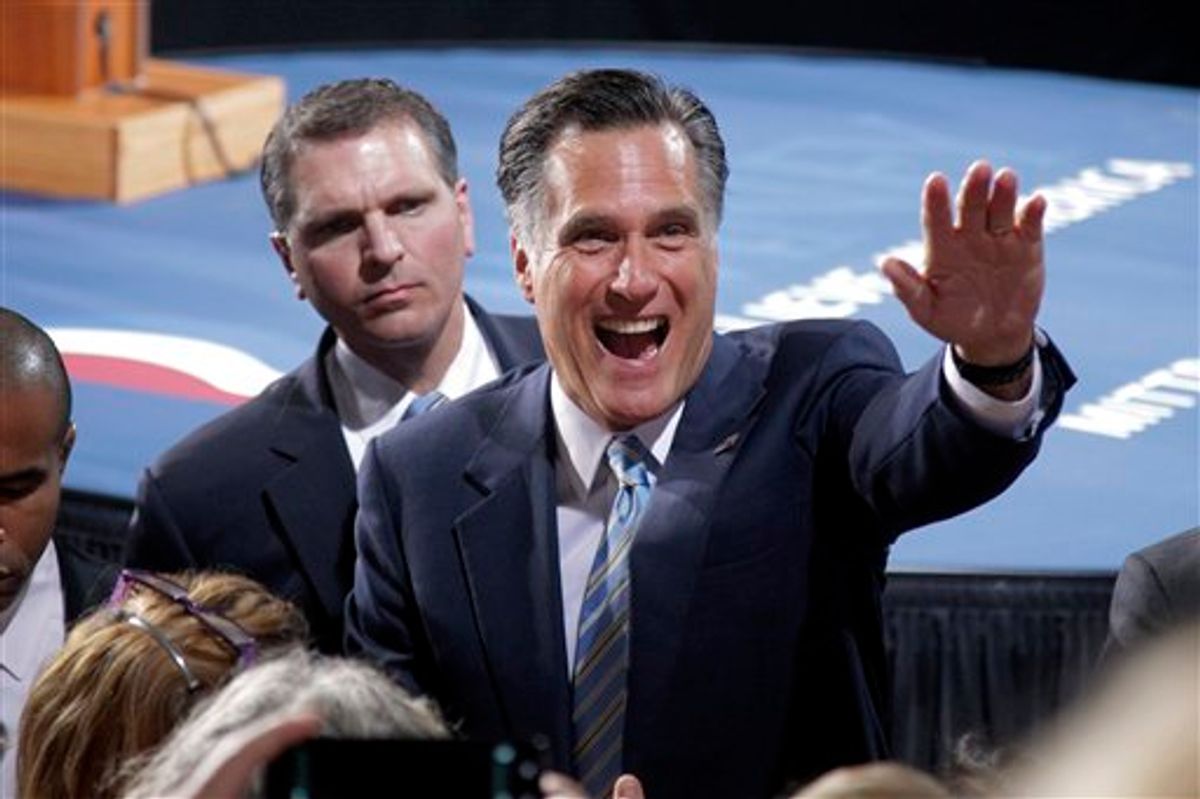 Over and over and over this year, he delivered primary-night addresses that were designed to close the books on the Republican nominating contest and shift the political world’s focus to a Romney-Obama general election contest. And then, invariably, he’d turn around and lose a state or two to Rick Santorum (or even Newt Gingrich!). Finally, with the prospect of a brutal home-state defeat in Pennsylvania looming, Santorum exited the race a few weeks ago, at which point Romney and Obama gave dueling speeches that were regarded as the informal kickoff of the general election campaign.

That was three weeks ago. Since then, the Romney and Obama camps – and sometimes the candidates themselves – have traded fire just about every day, and everyone has stopped paying attention to the GOP race. But there are still technically a bunch of Republican primaries left, and against essentially no competition Romney won four of them yesterday in Rhode Island, Connecticut New York, Delaware and Pennsylvania. When the results were in, he delivered an address from Manchester, N.H., which the political world decided to treat as the true end of the primary season and start of the general election -- even though Romney is still, technically speaking, several hundred delegates short of the magic number and even though he and Obama have already been in full general election mode for nearly a month.

The “news” in Romney’s speech was the candidate’s willingness to say himself that the GOP process is over and that he’s now the presumptive nominee. Actually, he didn’t exactly say that, either. The closest he came was this:

And tonight I can say thank you, America. After 43 primaries and caucuses, many long days and more than a few long nights, I can say with confidence – and gratitude – that you have given me a great honor and solemn responsibility. And, together, we will win on November 6th!

He didn’t really explain what the great honor and responsibility were, but the press was primed for Romney to declare victory, so he didn’t really need to spell anything out. Beyond that, Romney’s speech was a more polished version of what he said in all of his other would-be victory speeches this year, with a few new Obama put-downs thrown in.

“It’s still about the economy,” he said after warning that Obama would pollute the air with vicious negative attacks. “And we’re not stupid!”

It was also pretty much the exact same speech he’ll be delivering for the next six months. There’s not much nuance to the Romney pitch, which relies on convincing voters that every bit of economic anxiety they’re now feeling is ultimately the responsibility of the commander in chief, and no one else. There’s no room to grapple with the fact that Obama inherited from his Republican predecessor an economy that was in freefall and losing over a million jobs a month, or that his policies stopped that freefall, or that millions of net jobs have been created if you take out those first few months of his term, or Republicans have stood in uniform opposition to virtually everything he’s proposed. Getting into any of that would dilute the impact of a passage like this from Romney’s speech this night:

Four years ago Barack Obama dazzled us in front of Greek columns with sweeping promises of hope and change. But after we came down to earth, after the celebration and parades, what do we have to show for three and a half years of President Obama?

When Romney delivered his first unofficial general election kickoff speech a few weeks ago, I wrote about the limits of his message and style. Even his allies concede that he doesn’t have much of a public personality and he’s even admitted that he has no interest in offering detailed and specific policy proposals, for fear of giving his opponents ammunition. He’s a generic candidate. He won’t win the White House by inspiring the masses to vote for him; what Romney needs is for voters to decide they want to get rid of Obama, then to look at him and say, “Fine, he’ll do.”

Because of this, the effectiveness of Romney’s stump speech figures to vary over the next six months. If it’s delivered against a backdrop of encouraging economic news, the effect will be flat. If it comes amid bad economic news, it will sound a lot more appealing. In this sense, Romney gave a better victory speech last night than he did at the beginning of this month – not because of anything he said, but because the weeks in between were marked by a discouraging jobs report and an unexpectedly high number of new unemployment claims.