You thought they were gone, but now they're popping up to claim that Iraq inspired the Arab Spring 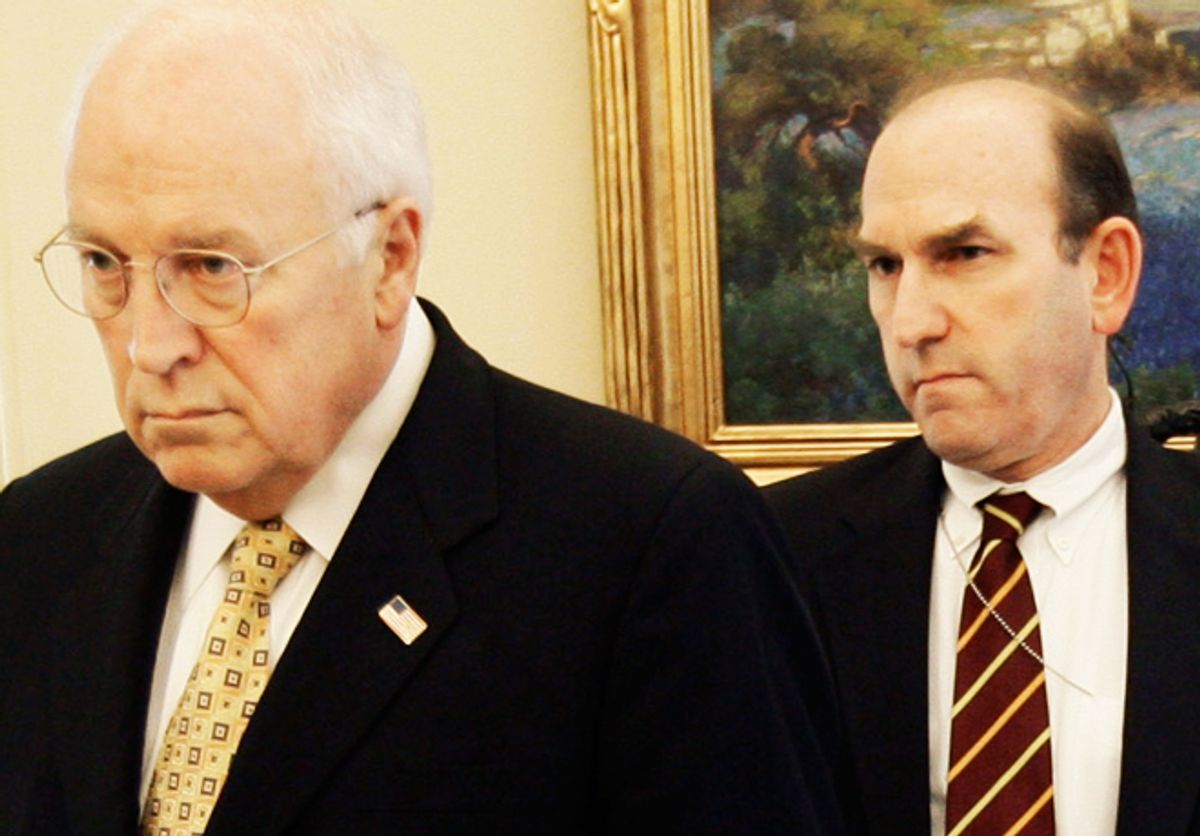 The rulebook for conservative punditry is straightforward. Push for a policy. When it turns into a disaster, defend it. When the defense becomes untenable, ignore it. Finally, when something unrelated but positive occurs, take credit for it.

The newest conservative myth is that the upheavals in the Middle East — called the Arab Spring but occurring too in non-Arab countries like Iran — are a result of the Iraq War. The “freedom” that George W. Bush brought to Iraq had a domino effect on other countries in the region, the argument goes. Neocon Robert Kagan told Salon recently that “there were repeated free elections in Iraq and that undoubtedly had some effect on how neighboring people views their government.” Said Kagan: “I think Egyptians said. ‘If the Iraqis can have elections, why can’t we have elections?’”

Kagan wasn’t the first to make this argument. Bush’s deputy national security advisor Elliott Abrams wrote in January 2011 that “the revolt in Tunisia, the gigantic wave of demonstrations in Egypt and the more recent marches in Yemen all make clear that Bush had it right.” Bush speechwriter Peter Wehner claimed “vindication for Bush’s freedom agenda” when the uprising began. Even Dick Cheney said that “I think that what happened in Iraq, the fact that we brought democracy, if you will, and freedom to Iraq, has had a ripple effect on some of those other countries.”

Few things could be more condescending than the argument that Middle Easterners had never thought of freedom or democracy before George W. Bush began speaking about it. Countries from Algeria to Iran had held elections or saw large-scale protests long before any former Texas governor illegally invaded Iraq.

But the idea that the Iraq War had a galvanizing effect on the freedom movements under way in the Middle East is best refuted by simply listening to the movements’ leaders. Those individuals leading the protests from Iran in 2009 to Syria in 2012 are unanimous: the Iraq War hurt, not helped, the cause of democracy in the Middle East. By unleashing anarchy and a civil war that caused the deaths of hundreds of thousands of Iraqis, the invasion in 2003 actually discredited democracy, if anything.

Here is leading Iranian dissident Akbar Ganji: “Since Iranians, in particular opposition groups, do not want to see a repeat of Afghanistan or Iraq in Iran, they’ve actually had to scale back their opposition to the government … The belligerent rhetoric of Bush didn’t help us [the Iranian democracy movement], it actually harmed us during that period.” In fact, what helped facilitate the large-scale protests in 2009 was the Obama administration’s engagement with Iran. According to Ganji, “the mere fact that Obama didn’t make military threats made the Green Movement possible.”

Or consider Wael Ghonim, who helped foment the Egyptian revolution and was imprisoned for his deeds. Asked if the cause of Egyptian self-determination was helped by the Iraq War, he was succinct: “Not at all.” He continued: “The war in Iraq killed so many innocent people, and it’s not something that any civilized nation should be proud of.” His thoughts on revolution represent the views of almost all Middle Easterners: “People who live in a country are the ones to decide their destiny because they are the ones who eventually pay the price for whatever choices they make.”

Leadership aside, it is clear that few people in the region take seriously the claim that the Iraq War sparked a wave of inspiration, for the simple reason that they see the war as a disaster for the Iraq people. A November 2011 conducted by Zogby found that most people in Iran, Egypt, Jordan, Lebanon, Iran, Saudi Arabia and the United Arab Emirates believed that Iraq was worse off as a result of the American invasion. Even most Iraqis — those who are said to have received the blessing of democracy — agreed that their country was worse off as a result of the war. If those in the Middle East believe the American-led war was a calamity for Iraqis, it is hard to believe they would think it was a model to be emulated in their own respective countries.

Of course, none of this will change the mind of those desperate to retrospectively justify the Iraq invasion. If an Arab Spring had broken out in 2050 instead of 2011, some student of a current neoconservative would have claimed Iraq was the spark the caused the fire. That fallacy may be pleasing for Bush’s intellectuals and policymakers unable to face the consequences of their decision to push for war in Iraq, but those in the region are under no such delusion. Nobody else should be either.