Rise of the Dad Wars

Increasingly, women aren't the only ones being criticized for choosing to stay at home with their kids 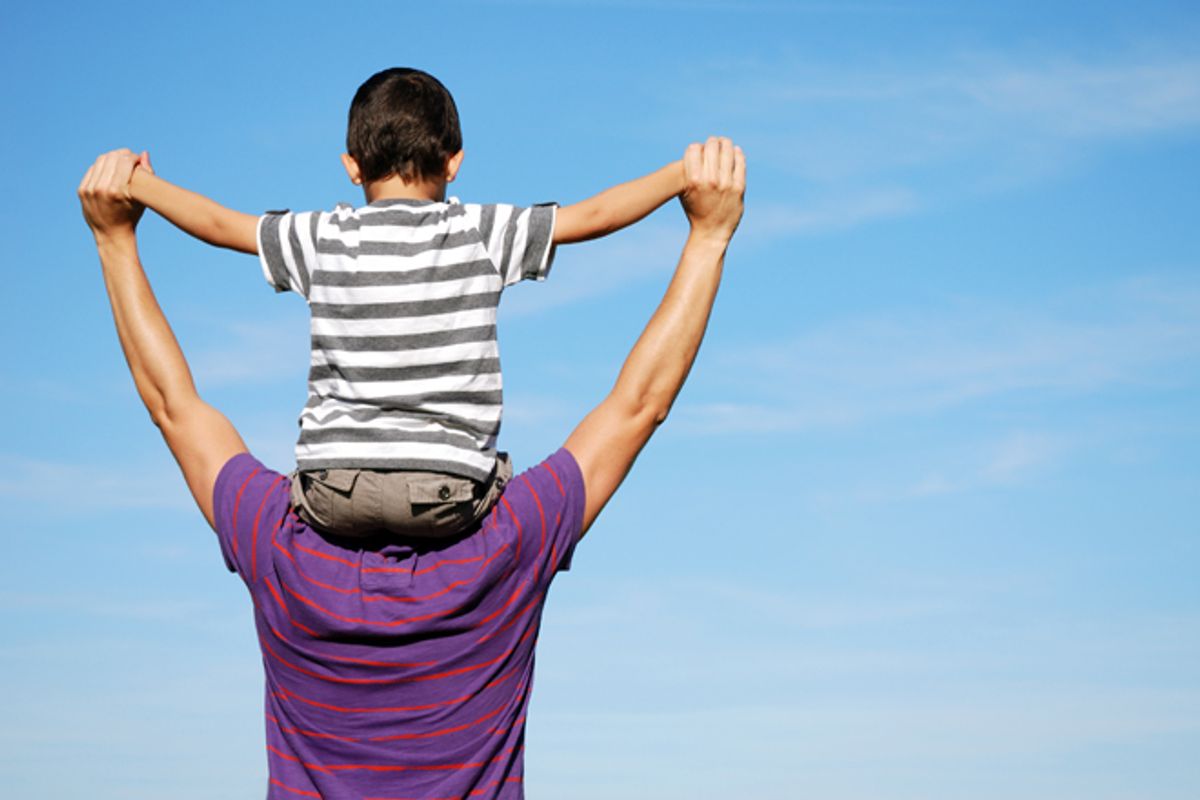 "It feels like we're supposed to have it all, and we're not supposed to bitch about it," an Austin stay-at-home parent of two tells me. "We're not supposed to say how hard the job is." His name is Doug. When it comes to raising children, it's not just women who receive criticism and second-guessing.

Spurred by flexible work situations, mates with a more lucrative income, a sluggish job market, or simply the desire to be the one in the family who does the bulk of the child rearing, the population of fathers who stay at home with their kids is small but growing. The U.S. Census notes that 16 percent of our preschoolers are cared for by their fathers while their mothers work. In America in 2010, there were 154,000 stay-at-home dads caring for 287,000 children. We see them not only on the playground but also in popular culture on shows like "Up All Night" and "Modern Family," with prominent dad characters who've scrapped the career fast-track for play dates and preschool interviews. Yet just as decades of feminism haven't eradicated sexism, the glass ceiling and the elusive dream of "having it all," the growing numbers of men who challenge traditional gender roles on the domestic front haven't yet wiped out a different share of deeply rooted biases.

Doug is a veritable trailblazer. For the past 12 years — first when his wife was sole breadwinner and now as a work-at-home entrepreneur — he's handled "all the home-related stuff, such as laundry, cooking, shopping, getting the kids to school, taking the kids to the dentist, etc." When his family was living in the Bay Area a dozen years ago, "I'd be the only dad dropping off his kid at school," he recalls. "Nobody was mean to me, but they'd look at me like, 'What are you doing here?' There was not a lot of community for me." However, now that "my entire work group is all men, and all of them work from home," he says, "people don't seem as stunned" by his lifestyle anymore.

Even as things are changing, though, old expectations persist. We experience them in dated, stupid references to 30-year-old Michael Keaton movies. We see them in ads that suggest that dads are innately incompetent at simple tasks like changing diapers. We hear it in the subtle jabs about what a dad's role is. Chris Read, who runs Canadian Dad, says he deals with "negativity from backseat parents who still feel like I am 'babysitting' when I watch my kids and feel the need to interject with their advice on what I'm doing wrong." And sometime HuffPo blogger Dave, who's home with three young sons, says, "People ask my wife, 'Do you worry about the kids home with him all day?'"

Along with the assumption of male domestic ineptitude, SAHDs deal with the persistent equation of masculinity with income and career achievement. Stay-at-home dad Christopher admits, "You hear from a wide variety of sources that it's a man's duty to provide for his family, and it stings when I hear it. I get teased in my own family about it sometimes." But, he adds, "When I'm with my daughter and watching her grow up and not missing it, it's then that I really don't give a flip what anyone might think of me." And Russ, a Minnesota stay-at-home father of two young daughters, thinks that "When you overlay the gender role a man is supposed to have in our society with the notion of being a stay-at-home parent, there's a lot that's very hard for people to understand." He says that one of the first misconceptions is that a man at home is a man who has it easy. "It's really hard," he says. "It's really, really hard to be a man in a traditional women's role. Nurturing children is an extremely difficult job. I have guys say to me, 'How did you get this gig?' My response is that if more men stayed home with their children, they'd be getting their wives a lot less pregnant."

It's not just other men who have a hard time getting their heads around a guy in the domestic sphere, either. When mothers create support networks for one another, dudes are often iced out of them. Russ says, "There is no question that isolation is huge. I was in a community that had a play group they called Mom's Morning Out. When I joined, they changed it to Parent's Morning Out. But then they decided to limit the size of the group, and the women met and let me go. This was a pretty progressive group. It's not like they had no experience with discrimination. But I was the only man in the group, and I was the only one who was excluded." And blogger Dave echoes the experience, saying, "I was involved in play groups, and some of the women were very angry that there was a man there. They felt invaded. There were several people who gave me stinkeye, so I decided it wasn't worth it."

I've certainly witnessed the dad snubs myself, the circling of the lady wagons. I often suspect there's a fox-in-the-hen-house aspect to it — the unspoken concern that any daytime interaction between hetero men and women will inevitably bust out in a Tom Perrotta novel.

There's also a likely darker excuse for the shunning: our unfortunate modern uncertainty of men who spend time with children. There's a sadly pervasive assumption they're all predatory until proven otherwise. Stephen, an Illinois father of two young daughters, says, "If I take the kids to the playground, I'll wave and say hi — and the moms will stay in their circle. I've wondered, do I look like a creepy weirdo? Am I not part of the clique? I'd understand if I rode my bike to the playground by myself, but I've got kids with me." And Ryan McLuen, who writes the Dad's Misadventures blog, says that even though "More often than not people are respectful of the fact I'm home with the children … there's kind of a stigma to being a male who loves kids. In a lot of people's eyes it's creepy."

So why do SAHDs put up with it — the skepticism and the criticism and plain old everyday bafflement? The same reason so many of us make the choices we do. Because it's what's right for us. Daniel, a work-at-home father of five kids ranging in age from 23 months to 19 years and the brains behind Post Post Modern Dad, says that his kids have "a happier parenting duo" with his family's arrangement — one that makes for a more harmonious family all around. He says that he hopes his kids will someday "look back on their childhoods and appreciate that I was able to be part of their lives so much more." Stephen, meanwhile, calls his choice to stay home with kids quite simply "the best decision I ever made." And Ryan says, "My wife needs her work. Knowing her, and knowing me, this was a natural fit." What's natural isn't always what's traditional. It's what works best and what creates the most nurturing environment for each member of a family.

You don't have to be at home all day to be loving and supportive and involved with your children. But it should be more than OK if you are home all day — and that's true whether you're a man or a woman. A father, even a father who doesn't go into an office, is not a babysitter. He is not Mr. Mom. He is Mr. Dad. He has his own way of doing things. He has his own set of challenges and struggles and frustrations. But diaper changing and peek-a-boo playing and being a loving human and a parent aren't skills unique to women. Both men and women need to work together to remember that and to practice it. As Chris Read says, "I couldn't imagine life without the joy of knowing that I did more than just create my kids." And, he adds, "I'm hoping the non-believers start to see that we dads are not only capable participants in our children's lives, we're willing ones."