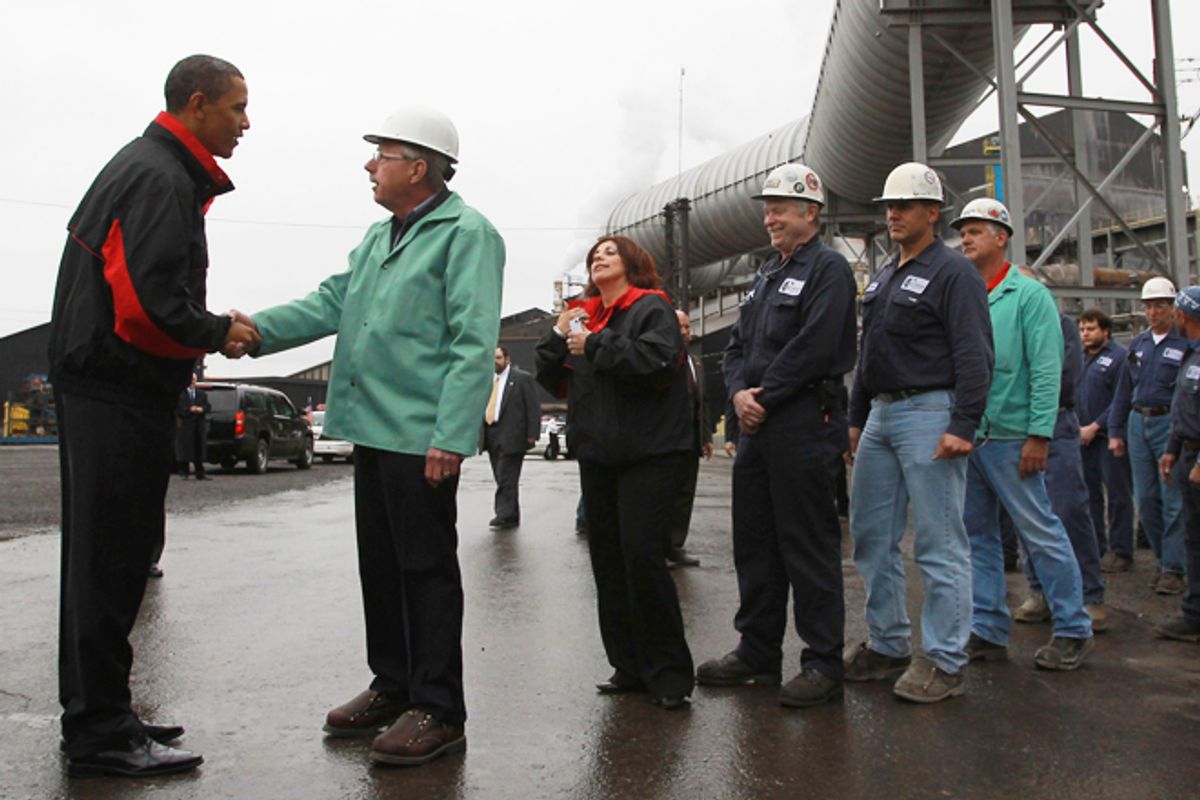 On April 4, Barbara Harms’ boss forced her to attend a meeting about why she shouldn’t join a union. The two-hour, on-the-clock meeting was run by Michael Penn, a professional anti-union consultant. Harms says Penn told workers that “you’re going to sign your life away if you sign a union card … the union would tell you to go out on strike … the place could close down.” The meeting left Harms and other pro-union workers frustrated and angry. Especially because their taxes made it possible.

Harms works at the National Benefits Center (NBC) office in Lee’s Summit, Mo. She's not directly employed by the federal government but is, instead, a contractor. She is one of about 800 workers there employed by the British company Serco, or Serco's subcontractors, to process immigration paperwork under Serco's contract with the federal government ($190 million a year, as of 2009). Penn, meanwhile, is a partner at the anti-union firm Crossroads Group. According to the most recent contract he filed with the Department of Labor (for a different client), his services cost $350 an hour. Serco presumably paid for Penn's time out of its own pocket. But taxpayers paid for the facilities -- from office space to audiovisual equipment -- he used to campaign against the union.

Like Harms, many Americans would resent the prospect of taxpayer dollars, or taxpayer-funded resources, being deployed to bust a union drive. President Obama once seemed to be against it, as well. In his first month in office, President Obama signed an executive order apparently aimed at similar situations. Obama’s order forbids government reimbursement for “the costs of any activities undertaken to persuade employees … to exercise or not to exercise … the right to organize and bargain collectively.”

But as Serco and its subcontractors fight to stay union free at the NBC, workers and union staffers say the order has meant less than they’d hoped. And despite Obama’s order, the government says that Serco can use government facilities to fight unionization without breaking the law. Now, some union activists are questioning whether Obama's support for them is as firm as it once seemed. “We have an executive order that sounds good,” says Chris Townsend, the political action director for the United Electrical, Radio and Machine Workers of America (UE). “But I am yet to be convinced that [it] amounts to anything.”

Serco isn’t the only company to aggressively combat unionization while reaping a taxpayer-funded windfall. A 2010 report from the Government Accountability Office found that the federal government had awarded over $6 billion in contracts in fiscal 2009 to contractors that had been cited for violating federal labor laws, from wage and hour rules to organizing rights. Earlier in 2010, the New York Times reported that the White House was planning to implement a “high road” contracting policy that would direct more government contracts to companies with better labor and environmental records. But by 2011, Obama OMB nominee Heather Higginbottom told senators in a confirmation hearing that there were no such plans afoot.

The current Serco fight began in January, when workers at the Lee’s Summit NBC – an arm of the U.S. Citizenship and Immigration Services (USCIS) -- began organizing with UE. Workers say they were spurred to unionize when Serco demoted them en masse in order to avoid expected raises.

The UE director of organization, Bob Kingsley, says Obama’s executive order “has not slowed Serco in its effort” to mount “a classic union-busting campaign.” UE has filed charges with the National Labor Relations Board alleging that Serco’s campaign broke the law, by -- among other things -- illegally monitoring union activisim and forbidding workers from talking about the union at work. (Serco and Michael Penn did not respond to repeated requests for comment.)

In February, workers say managers required them to watch an anti-union film during work hours. By April, Serco had brought in Penn. UE says that most of the contract employees at the Lee’s Summit NBC site were sent to anti-union sessions led by Penn during the first week in April. One of them, Erica Yount, says Penn emphasized that with a union, “we could lose a lot of the benefits that we have now … the company doesn’t have to give us anything, that they could take stuff away.” Another, who requested anonymity based on fear of retaliation, says it felt like a cult meeting: “It was like being locked in a room with Jim Jones, without the Kool-Aid.”

Reached via e-mail, USCIS spokesperson Tim Counts said that USCIS is in compliance with the executive order, and that the government “will not be billed for the time Serco employees spent” in anti-union meetings, including managers. Some workers say Serco scheduled them for “administrative overhead training” time during the April meetings, presumably so that time would not be billed to the government. But others question the accuracy of the accounting. Harms says that while she attended a meeting at 6:30 a.m., a copy of her schedule showed regular hours in the morning and “overhead” hours in the afternoon. The union also questions whether Serco is accurately tracking time that Penn spent with its own managers, coaching them on their role in the anti-union campaign. (Salon has made a Freedom of Information Act request to USCIS for relevant documents.)

But even if Serco paid all the wages for anti-union meetings on its own, the government is still implicated in them. The government, not Serco, owns the property used for the meetings, including furniture and audiovisual equipment (UE says that Serco also sent workers anti-union memos that employees would be able to access only on their government-provided computers). Asked whether Serco and its subcontractors were required to pay a rental fee or ask permission before using government property to hold mandatory anti-union meetings, Counts responded, “Under the terms of the contract, the contractor is permitted to use government facilities to communicate with its employees without obtaining government permission.”

Serco doesn’t own the NBC office space where Penn held his “captive audience” meetings either. The government rents it from a local technical college. Asked whether Serco paid the government, or the college, to use the space for anti-union meetings, Counts said that under current contracting regulations, “contractors may use facilities rented by the government for activities allowed by the contract but not directly related to services performed for the government.”

But the space isn’t open to everyone – workers note that security guards kicked UE organizer Karen Hardin off the property when she came in hopes of talking to off-duty workers about the union. Asked whether the government, as the lessee of the space, would grant a hypothetical request from UE to meet with off-duty workers in nonwork areas on-site, USCIS’ Counts replied that doing so would not be “consistent” with the requirement that agencies “remain impartial concerning any dispute between labor and contractor management.”

To some workers who were required to attend Penn’s sessions, the government’s role seems anything but impartial. They say the mandatory meetings, which would be intimidating in any setting, had a greater impact on workers because government facilities were involved. “You just want to go up and chew them all out for even thinking that they had the right to do this,” says an employee of one of Serco’s subcontractors, who requested anonymity. But according to USCIS, nothing in the 2009 executive order prevents a professional union-buster from running mandatory anti-union meetings for federal contractor employees using government facilities.

Salon’s inquiries to the White House (regarding whether USCIS’ view is consistent with the executive order), and to the chair of the Federal Acquisition Regulatory Council (regarding how the executive order has so far been enforced), were both referred to a spokesperson for the Office of Management and Budget. In an e-mail, she wrote that the “allowability of costs under cost-reimbursement contracts is governed” by “cost principles,” one of which had been amended to “make unallowable the costs for any activities undertaken to persuade employees” whether to organize. In other words, it's now government policy to reject requests to reimburse union-busting expenses. But that may not contradict USCIS' statement, which implied that companies can use government-provided facilities for union-busting purposes. As for the order's track record, the spokesperson wrote, “The Office of Federal Procurement Policy does not monitor or track the disallowance of claimed costs for which the contractor seeks reimbursement.”