Is Rick Santorum bitter enough to join the exclusive fraternity of candidates who just couldn’t let it go? 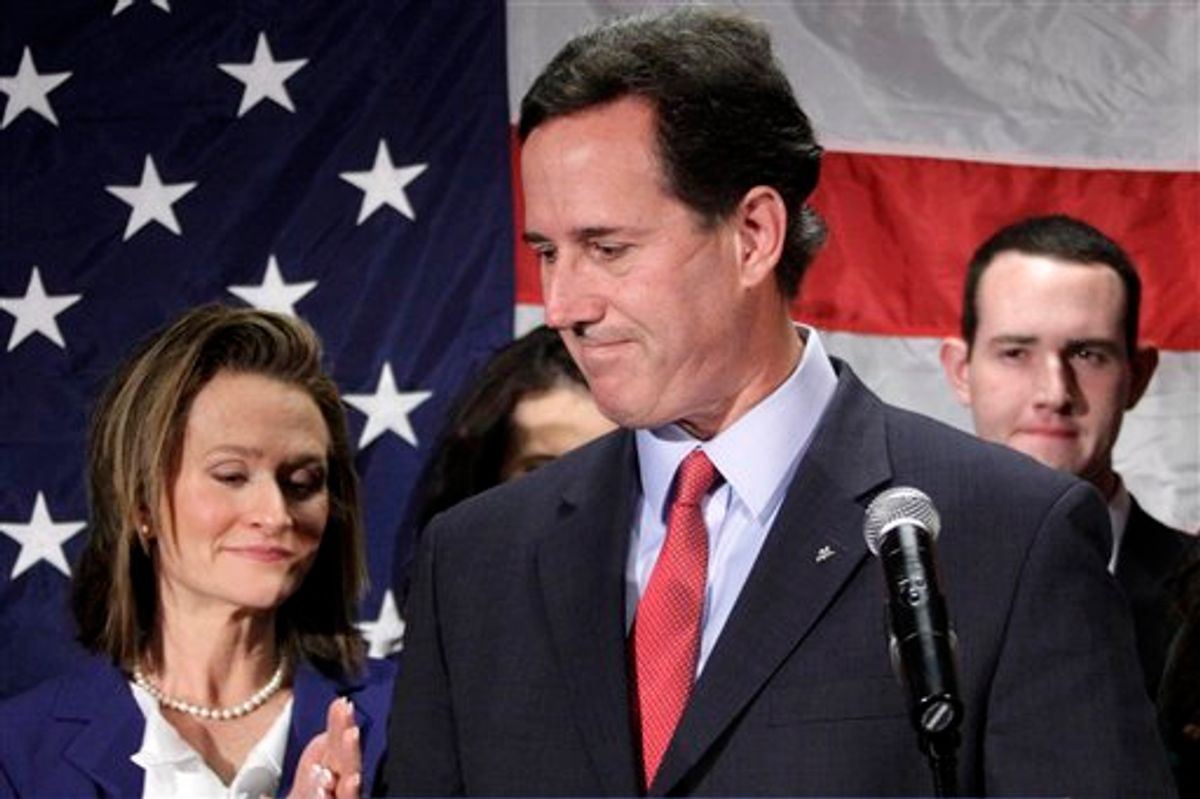 After randomly targeting Delaware’s primary and falling miserably short there, Newt Gingrich is apparently set to end his presidential campaign on May 1. Why he doesn’t just drop out today is a bit of a mystery, but whenever he makes it official, it’s pretty clear what will happen: He’ll say nice things about Mitt Romney, declare his full support and pledge to help in any way he can in the fall.

This is what most losing presidential candidates, even those who issued savage primary-season attacks on the ultimate nominee, do. And it’s a tradition that Gingrich, who called Romney a liar at the height of the GOP primary campaign, has already indicated he’ll follow.

Rick Santorum, though, is a different story. He dropped out three weeks ago and has yet to formally endorse Romney. And he really hasn’t had anything nice to say about the man who beat him, either. When pressed, as he was on CNN last night, the most he’ll allow is that “he is the person that is going to go up against Barack Obama. It's pretty clear. We need to win this race.”

Obviously, Santorum believes he was victimized by Romney and his super PAC allies during the GOP campaign and is nursing a mighty grudge. He’s also probably internalized his own campaign rhetoric, which portrayed Romney as a fraud and Santorum as the last best hope for honest, God-fearing conservatism. He’s hardly the first embittered losing candidate, and there are still four months between now and the Republican convention – plenty of time for him to suck it up and muster some fake Romney enthusiasm. So maybe he’ll come around.

Or maybe he’ll become one of the exceptions – the handful of primary-season losers who never did get around to making nice with their party’s nominee:

Ronald Reagan: Reagan led his party’s rising conservative wing in a 1976 revolt against Gerald Ford, nearly toppling the president at what remains the last truly suspenseful national convention. In a gesture of unity, the victorious Ford called Reagan down to the stage after delivering his own acceptance speech, asking his vanquished foe to say a few words. Presumably, Ford expected Reagan to issue a brief and peppy plea to band together against Jimmy Carter in the fall. Instead, Reagan recited a mesmerizing homily that made no direct mention of Ford or the general election – and that stirred instant buyer’s remorse among the Republicans who had just put the president over the top. When the Kansas City convention was over, Reagan refused Ford’s offer to chair his general election effort in California and did no campaigning for the president, limiting himself to appearances with congressional and gubernatorial candidates. (For what it’s worth, Santorum repeatedly invoked the Reagan ’76 story in the dying days of his own campaign.)

Ted Kennedy: The Massachusetts Democrat was never fond of Carter, who had secured the party’s 1976 nomination by grasping the significance of the radically expanded primary calendar in a way that Kennedy and the party’s traditional coalition leaders didn’t. As president, Carter antagonized organized labor and other pillars of the Democratic establishment, allowing Kennedy to run against Carter in 1980 as the standard-bearer of the New Deal/Great Society wing.

The timing of the November 1979 Iran embassy siege probably saved Carter from a humiliating primary-season defeat. Polls from the fall of ’79 had shown Kennedy crushing him, but the rally-around-the-flag effect reversed the numbers and helped Carter sprint to a huge delegate lead when the primaries began. But Kennedy closed with a kick, pressing ahead through the summer even as Carter claimed an outright delegate majority. With polls showing Carter losing badly to Reagan, Kennedy campaigned for a rules change at the New York convention, one that would have freed delegates from their primary season commitments and allowed them to vote for Kennedy instead. The effort fell short, and Kennedy ended his campaign with the most eloquent speech of his career.

Two nights later, after Carter had delivered his acceptance speech, Kennedy was ushered to the Madison Square Garden stage to join the president and other top Democrats. His body language made it clear that he didn’t want to be there. But Carter, desperate to win back the Kennedy crowd, very much wanted him there, and he was reduced to literally chasing Kennedy around the stage in a demeaning – and ultimately futile – effort to get his opponent to lock arms in a traditional unity pose. The incident was recounted endlessly in the press and became a symbol of Carter's supposed weakness. It also made the effect of this general election ad from the Reagan campaign all the more devastating:

Jerry Brown: His 1992 story could be a cautionary one for Santorum. Brown came to the race as a total has-been, a former California governor and two-time presidential candidate who’d left politics – and, briefly, the country – after losing a senate race a decade earlier. Traction was hard to come by, and Brown was eclipsed early on by Bill Clinton, Paul Tsongas and even Mario Cuomo. But there was some residual affection for Brown in pockets of the party, and he managed to post surprise victories in Maine and Colorado. Still, he finished as an asterisk in most contests and was a largely forgotten candidate until Tsongas suspended his campaign after blowout losses in Michigan and Illinois.

The timing was perfect for Brown, because while the political world saw this as a nomination-clinching moment for Clinton, there were still profound doubts among Democrats about Clinton, who had been hit with multiple scandals. And the next state on the calendar, Connecticut, was in the heart of Tsongas country – a poor geographic and demographic match for Clinton. In what is still one of the biggest primary-night surprises of the modern era, Brown upset Clinton in the Nutmeg State, an outcome that immediately threw the Democratic race into turmoil and turned the next primary – in New York, two weeks later – into a do-or-die test for Clinton. Suddenly, for the first time in years, Brown was in the national spotlight. But his flat tax plan and his vow to make Jesse Jackson his running mate helped Clinton turn New Yorkers against Brown, and when Clinton won the primary by 14 points, the Democratic race essentially ended. Except Brown refused to quit, enduring one drubbing after another for the next two months and becoming a political afterthought all over again.

At the July convention in New York, Brown was able to make noise with his bloc of delegates. Clinton offered him a primetime speaking slot in exchange for peace -- and an endorsement. Brown refused and instead had himself nominated from the floor, a move that guaranteed him 20 minutes at the podium. Not once in his speech did he mention Clinton, and he left the convention without making an endorsement. One did not come in the fall campaign, either. Although by that point, the political world had stopped paying attention to Brown, something that would continue until the late ’90s, when Brown used an unlikely springboard – the Oakland mayoralty – to relaunch his political career.

Here’s Brown at the ’92 convention:

Pat Buchanan: He actually fared better in 1996 than in 1992, when he was afforded a primetime slot at the GOP’s Houston convention after challenging President George H.W. Bush in the primaries. The Bush 41 team saw accommodating Buchanan as essential to pacifying conservatives, who’d revolted against Bush after his 1990 tax hike and used Buchanan as their revenge vehicle. Sure enough, Buchanan did come through with a ringing endorsement, but the headlines from Houston focused more on his declaration of a “culture war,” hurting the GOP’s image with swing voters. (Buchanan’s speech also knocked the first night’s main speaker, Ronald Reagan, out of primetime.)

Fearful of repeating the mistake of Houston in ’92, the GOP’s 1996 nominee, Bob Dole, was in no mood to negotiate with Buchanan, who had given the party the scare of a lifetime by winning the New Hampshire primary. Effectively, the ’96 GOP race ended when Dole – aided by a panicked Republican establishment – won a lopsided victory in South Carolina, but Buchanan chugged along through the primary season and into the summer, racking up over 3 million votes.

As the ’96 San Diego convention approached, Buchanan demanded the same treatment he’d received in Houston. The Dole team offered him one minute of time in a pre-taped video with the rest of the defeated candidates. Furious, Buchanan rented his own convention hall and delivered the convention speech he’d wanted to deliver from a few miles outside of the official GOP gathering. There was talk of a walkout by Buchanan delegates during Dole’s speech, but they stayed put when Buchanan came through with one of the least enthusiastic endorsements in campaign history – a typed statement ticking off his points of agreement with the official Republican platform and concluding that, “therefore, I endorse the Republican ticket of Dole-Kemp and will work for a national Republican victory in November.” Needless to say, he was nowhere to be seen in the fall.