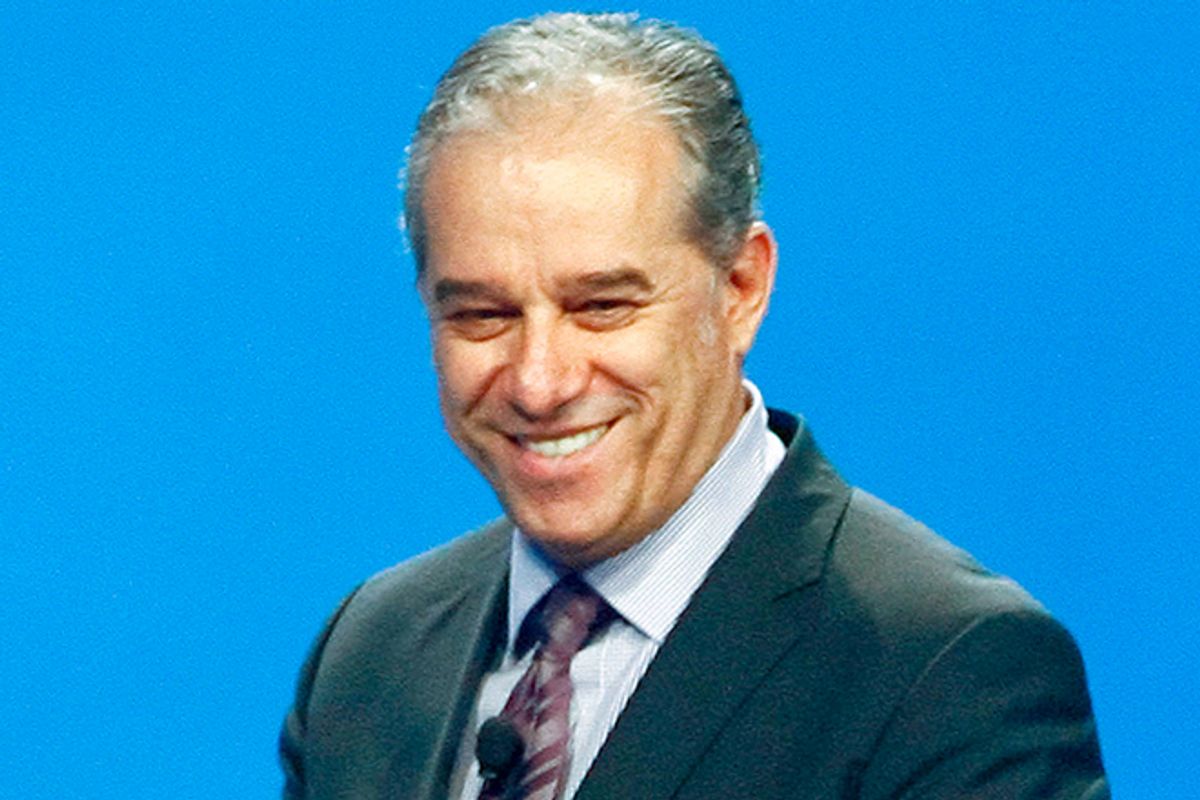 Bloomberg is reporting that Eduardo Castro-Wright, the Wal-Mart executive fingered by the New York Times as the man at the heart of a huge international bribery scandal, has stepped down from his position as a member of the board of directors at MetLife.

One has to pity poor Bloomberg reporter Andrew Frye, squelched by the constraints of his employer's by-the-book writing guidelines from expressing his natural aghast incredulity at Castro-Wright's well-compensated sinecure as "a member of MetLife's Governance and Corporate Responsibility Committee."

MetLife's governance committee "oversees the management and mitigation of risks related to failure to comply with required or appropriate corporate governance standards," the insurer said last month in a proxy statement. Castro-Wright, who also served on the compensation and investment committees, was paid $259,124 for his work at the insurer last year, including $145,000 in cash and $112,502 in stock awards, the filing shows.

Fox-guarding-hen-house clichés don't come close to expressing the hypocrisy that rewards misbehavior with such largesse. Right about here, someone should be shrieking: This is what's wrong with corporate America! This is why we shouldn't be allowing the CEO class to influence government policy. This is why the fact that Wall Street hates Obama should be considered a badge of honor!

Yes, yes, I know, we're not supposed to convict the innocent until proven guilty, but I defy anyone to read the Times' masterful piece of investigative reporting and not come away convinced that Castro-Wright built his successful career at Wal-Mart by bribing government officials in Mexico to speed the approval process for building new Wal-Mart stores. In fact, the very news that Castro-Wright was forced to resign from the MetLife board is an eye-opening admission. Normal American corporate governance practice allows disgraced CEOs to keep milking the board-of-directors gravy train for years after their dishonor is exposed.

It is amusingly enraging now to go back and look at the hype the business press poured on Castro-Wright as he ascended the ladder.

To make that happen, Castro-Wright's team slashed prices and expenses, squeezed suppliers to get products into stores faster, and used smaller store formats (dubbed Bodega Aurrerá). He also showed a knack for public relations, defusing criticism by emphasizing jobs and low prices when merchants protested the construction of a Wal-Mex store near an archaeological site.

A "knack for public relations" -- a.k.a.: alleged repeated violations of the Foreign Corrupt Practices Act. (A law, by the way, that Wal-Mart attempted to water down via heavy lobbying.)

In September 2005, a senior Wal-Mart lawyer received an alarming e-mail from a former executive at the company’s largest foreign subsidiary, Wal-Mart de Mexico. In the e-mail and follow-up conversations, the former executive described how Wal-Mart de Mexico had orchestrated a campaign of bribery to win market dominance. In its rush to build stores, he said, the company had paid bribes to obtain permits in virtually every corner of the country....

Wal-Mart dispatched investigators to Mexico City, and within days they unearthed evidence of widespread bribery... [But] neither American nor Mexican law enforcement officials were notified. None of Wal-Mart de Mexico’s leaders were disciplined. Indeed, its chief executive, Eduardo Castro-Wright, identified by the former executive as the driving force behind years of bribery, was promoted to vice chairman of Wal-Mart in 2008.

Not only was he promoted, but he received cushy directorships at companies like MetLife, where his responsibilities included overseeing corporate governance.

On second thought, maybe it is isn't necessary for Bloomberg's Andrew Frye to have the opportunity to go all apoplectic on Castro-Wright. The facts pretty much speak for themselves. In the United States, the rewards for bribing your way to success include getting paid a quarter of a million a year to advise other corporations on how to behave responsibly.