A victory for The Hague 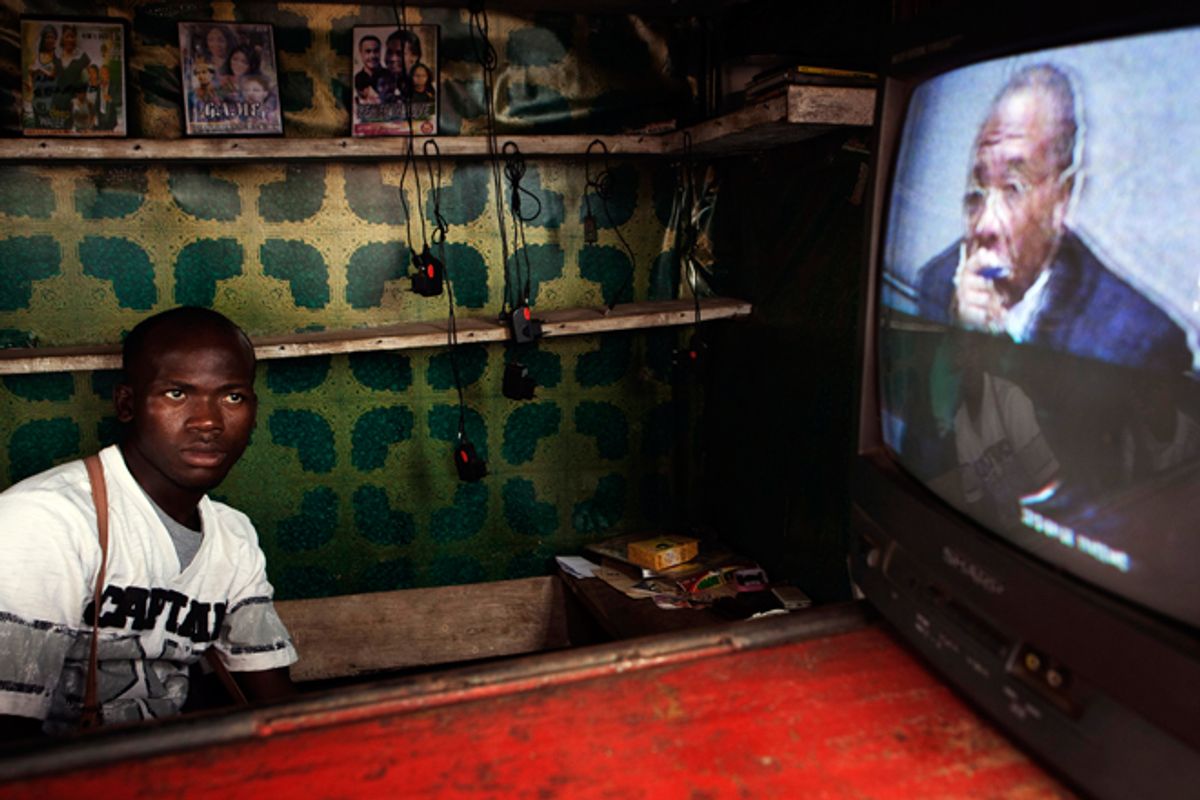 A Freetown street vendor watches a live broadcast of the Taylor verdict being delivered. (Reuters/Finbarr O'Reilly)
--

The verdict against former Liberian President Charles Taylor at the Sierra Leone Special Court has been eagerly anticipated by many in Sierra Leone. But, as is often the case with abusive leaders wielding power, bringing Taylor to justice was once considered a less-than-welcome development in diplomatic circles. More than a few feared at that time that bringing charges against a sitting president in the midst of a conflict would do more harm than good.

In June 2004, though, I roamed Freetown’s muggy markets trying to get a sense of what people in Sierra Leone’s capital thought of the Sierra Leone Special Court, the mixed national and international court established to deal with atrocities committed during the country’s civil war. The court’s first trial, against a popular government official, had begun that day, and the prosecutor’s opening statement could be heard on radios in market stalls and on street corners. The talk in town was not, however, of that trial. Instead people wanted to know when Taylor would be brought to justice for supporting the rebels who had caused their country so much horror. It was clear that many in Sierra Leone felt justice could be served only if Taylor was held accountable.

I admit I was doubtful about Taylor’s chances of being brought to justice. At the time, he had left office and was living comfortably in a villa in Nigeria. But less than two years later, after much international pressure, Taylor was arrested fleeing Nigeria with a carload of cash.

Taylor’s arrest and prosecution demonstrate vividly that the reach of justice has been extended and that seniority no longer guarantees protection. Victims who had long been accustomed to seeing top leaders shrug off responsibility for atrocities now expect more. Prosecuting heads of state, however, remains controversial, particularly if the leader is seen as critical to peace talks. Negotiators and commentators often argue that leaders facing likely conviction have little incentive to lay down their arms and that the prospect of prosecution may spur further violence. It is also often delicate, to say the least, to raise the issue of justice in negotiations when the person across the table is suspected of horrific crimes.

For these reasons the unsealing of Taylor's arrest warrant on June 4, 2003, the opening day of peace talks in Ghana to end Liberia’s civil war, was not greeted with much diplomatic enthusiasm. African presidents at the talks expressed embarrassment and concern that the indictment could scuttle a successful settlement.

Yet Taylor agreed to step down from the presidency shortly thereafter. His indictment de-legitimized him both nationally and internationally. By preventing Taylor from playing a role in any future government, the indictment helped ensure he would not participate in transitional elections and removed a critical obstacle to negotiating a cease-fire agreement. The warrant helped to hasten his removal from office at a time when he was losing ground militarily. He accepted the offer of haven from Nigeria.

Dire predictions were also made when the prosecutor for the International Criminal Tribunal for the former Yugoslavia announced the indictment of the Serbian president, Slobodan Milosevic, during negotiations to end the Kosovo conflict. Yet a peace agreement was reached within days of the indictment. Two years later, Milosevic was in The Hague.

Similarly, the tribunal indicted the top Bosnian Serb leaders, Radovan Karadzic and Ratko Mladic, shortly before (and again during) the 1995 peace talks in Dayton, Ohio. Though the U.N. secretary-general castigated the tribunal's prosecutor, the indictments may have actually benefited the peace talks by keeping the men from the negotiating table since the Bosnian president was reportedly unwilling to sit with them. The agreement prohibited tribunal suspects from holding office, which helped ensure that neither man played a part in post-Dayton Bosnia and contributed to stability.

While no two situations are exactly the same, experience shows that allowing justice to take its course won't necessarily impede the prospects for peace. Other national leaders associated with rights abuses in Libya and Syria, like Taylor, may one day wind up in The Hague. Though an arrest in the near term may be unlikely, Taylor's eventual apprehension and trial has taught that victims' patience may be rewarded.

Sara Darehshori is senior counsel in the U.S. program of Human Rights Watch and author of the report "Selling Justice Short: Why Accountability Matters for Peace."