I wanted to solve my fertility issues without hormones or high-tech meds. I had no idea how unnatural this would be 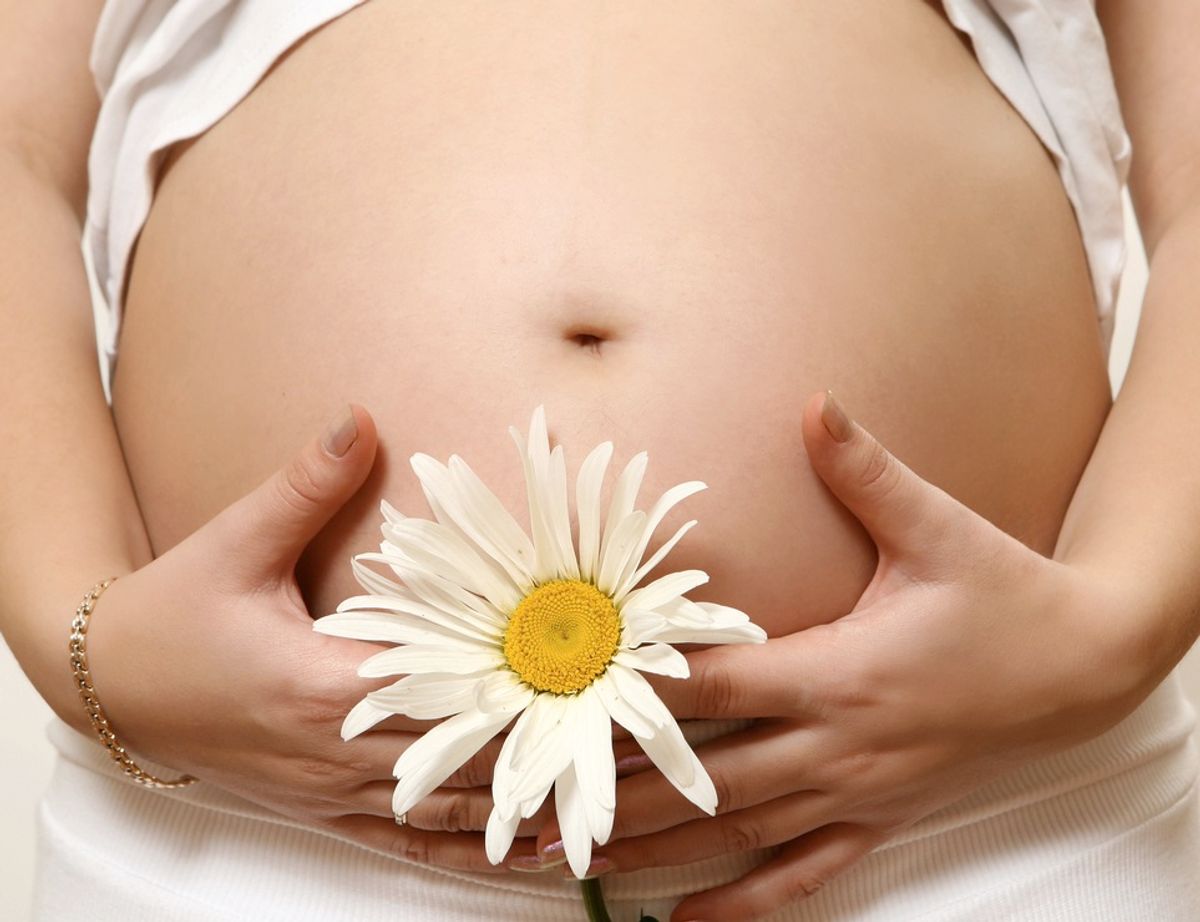 I’m not exactly the woo-woo type. I eat meat, shave my armpits, and Birkenstocks don’t fit my feet. But the year I turned 35, I went a little nuts in the New Age department. My husband, Ron, and I had crossed the three-year mark of trying to conceive. So far, our fertility journey had amounted to one miscarriage and countless trips to the doctor. Tests all showed the same thing: Ron had Super Sperm; I had a luteal phase defect. Every month, my period started too early and lasted too long. It’s difficult for a fertilized egg to implant in a uterus that’s constantly shedding its lining.

Attempts to fix my cycle didn’t work. Over time, my bleeding worsened. That’s when my fertility specialist recommended in vitro fertilization. IVF, he said, would allow him to “toy around” with my hormones. As he explained how many types of drugs he planned to inject in my body, I nodded politely while screaming no way inside my head. I was skeptical of high-tech baby-making measures. All that medication didn’t appeal, for one thing. Neither did the odds: I’d seen friends go through multiple failed rounds of IVF (chances are about one in three). From what I could tell, the stress of IVF wreaked havoc on relationships. Couples pillaged their savings and retirement accounts (the procedure is $15,000 a pop). I figured if traditional medicine wasn’t for me, perhaps I could cure my infertility a more traditional way, by changing what I ate and how I lived.

I had no idea that going natural would be so unnatural.

It started off simply. I weaned myself off coffee, kept the wine bottles corked, and threw away my Cocoa Puffs (caffeine might disrupt hormonal balance, alcohol might impair ovulation, and sugar is just plain bad for you, according to my fertility nutritionist). I put the kibosh on two of Ron’s favorite weekend activities: cycling, which could potentially damage his Super Sperm, and grilling out. I was being crazy, I knew, but I promised him it would only last a few months — just until I got pregnant.

Instead of hamburgers, dinner now consisted of daikon seaweed soup, a recipe I got from Julia Indichova, author of the book “Inconceivable” (Indichova conceived naturally after changing her diet and lifestyle, and I clung to her book like a map in the wilderness). I began eating more fruits and vegetables, except for peas, which, according to Indichova, contain a natural contraceptive.

A friend had gotten pregnant with the help of acupuncture. Some studies have found it can boost the chances of IVF success. Though I was skipping the IVF part, I began visiting a practitioner weekly; he poked me with needles to awaken my Qi, which, according to Chinese medicine, is the body’s vital life energy. After listening to my pulse, checking the coating on my tongue, and listening to me spill the details of my life’s struggles in a therapy-like session, he told me that my reproductive area was weak and that the acupuncture would move my Qi to help regulate my menstrual flow. Then he stuck a needle in the external part of my ear, and I yelped in pain. I began to suspect acupuncture wasn’t for me.

Next, I worked with an herbalist who gave me a combination of 15 plant extracts mixed and bottled into a tonic to drink daily. The herbal concoction looked like brown goop and tasted so disgusting I had to hold my breath to swallow the stuff.

When I described my new regimen to my fertility doc, he was open-minded about acupuncture but cautious about the herbs: “Herbs aren’t regulated by the FDA,” he warned. Still, I liked the idea of using plants as medicine; it seemed better than drugs designed to coax my ovaries to pop out 10 eggs at a time instead of one. There was no evidence that the herbs would be effective; other women who had my problem only turned to alternative medicine as a last resort, after IVF had failed. I held out hope that if I tried alternative medicine first, I could avoid IVF altogether.

But even with plenty of sex, followed by Viparita Karani (a yoga pose where I elevated my legs up the headboard to help the sperm along), goji berries (reputed to be an aphrodisiac), and week after week of acupuncture sessions, I didn’t conceive. In fact, I could barely tolerate acupuncture. The needles left me feeling anxious, not relaxed, so I stopped. Instead, I turned back to Indichova’s book to see what additional strategies she suggested to boost fertility: yoga for stress reduction (I practiced regularly), colonics to clean out my intestines (no way), and visualization techniques to bring about physiological changes in the body. That sounded safe enough. A stretch maybe, but much less painful than sticking a hose up my butt.

Indichova cited Gerald Epstein, a physician in New York City, as the go-to guy. So I called him at the American Institute for Mental Imagery and arranged to see him.

Epstein faxed me a visualization exercise to do before my appointment, one that he called the Egyptian Healing. Once a day, for seven days after I ovulated, I was to picture a larger-than-life me taking a journey up my cervix and into my uterus. Maxi-me had five eyeballs —one on the end of each finger of my left hand. I also had five small hands on the end of each fingertip of my right hand. If that wasn’t strange enough, I had to envision using these hands to gather yellow rays from the sun and vanilla beans from a field before climbing into my uterus to take a look around (with five eyeballs, I could see well in there). I cleaned away my hostile uterine lining with a golden brush, planted vanilla beans, and watched orchid petals unfold along my uterine wall. Gold, Epstein said, represented transformation; vanilla was a purifying aroma; and orchids represented strength. I tried to take the imagery exercise seriously, but it was hard not to giggle, which made me feel bad. That’s one of the problems I kept running into with alternative medicine. If I wasn’t diligent and earnest enough, I feared I wasn’t doing it “right.”

When I met Epstein in person I liked him right away. He wasn’t a quack. The more I listened to him, the more I felt what he said had merit. He believes that the mind is a powerful force. “It can both create and destroy health,” he said. To demonstrate how the mind exerts influence on the body he had me hold my arm in place, parallel to the ground, while he pressed down on it. I had an easier time resisting his push when I thought of things I loved (like my husband), but my arm sank when I thought of things I hated (like acupuncture). I was surprised; Epstein wasn’t. “People try to separate the mind and body, but they’re one,” he said.

Along with my fertility nutritionist and my ex-acupuncturist, Dr. Epstein wanted to “investigate my inner conflicts.” Especially those surrounding parenthood. Like most women, I was worried about whether I could successfully juggle my career and motherhood. I hated to admit it, but I was dreading the pregnancy weight gain, and I could easily work myself into a panic when I thought about the logistics of pushing out an 8-pound baby. We also talked about the fact that my extra-long periods began the same month I’d learned Ron and I had to leave California for Washington, D.C., a move I was less than thrilled about. Could my unhappiness about our relocation be causing my period problems? Epstein thought so. He told me about a cluster of cells in the mid-area of the brain known as the locus coeruleus, or blue nucleus, which typically sends neurochemicals to other parts of the brain to help the body function optimally. But in times of anxiety, the adrenal gland secretes stress hormones that deactivate the blue nucleus. To get it functioning again, Epstein suggested that I try reducing my stress hormones with visual imagery and by taking long, slow exhalations.

“Your mental concerns are reflected in your uterine instability,” he said. Now that’s something I never heard from my mainstream doc.

Maybe a super disciplined person can “imaginate” (as Dr. Epstein termed it) faithfully, practice yoga every day, and resist all urges for peanut butter cups, but I struggled to maintain all the rules of my routine. As I fed beets into my juicer, I felt grateful, I did, but I also felt impatient and frustrated. It’s hard being crunchy.

Two months later, my cycle did begin changing; my luteal phase had lengthened by a day. Was it thoughts of vanilla beans that made the difference? The Bound Supta Baddha Konasana I practiced on my yoga mat? With so many factors in play, it was hard to know for sure. But instead of feeling buoyed by this turn of events, I began to feel like a prisoner of my kinder, gentler routine. Giving up cookies was one thing, but after trying to give up wheat (too inflammatory!), meat (too acidic!) and dairy (too mucus-y!) I felt like a martyr, especially when I’d stare hungrily into my cupboard, bare but for a container of uncooked quinoa. I also felt perpetually paranoid. Would I sabotage my chances of pregnancy if I drank one cup of coffee? I canceled a weekend trip with girlfriends — what if I ovulated while I was away? I spent my free time Googling holistic fertility treatments. Ironically, I was caught up in the fertility obsessiveness I’d wanted to avoid in the first place. And I also couldn’t help thinking that while there may well be power in positive thinking, there is also value in giving voice to truth, even if that truth involves a messy uterus and the sadness of infertility.

Whether I pursued holistic medicine, Western medicine, or took a middle ground, I was beginning to suspect there were things I could control (diet and exercise) and things I couldn’t (whether a blastocyst implanted in my uterus). I’d been frantically running in mad little circles with my yoga practice, baked kale chips, and visualization exercises, hoping that I could create a baby by dint of sheer determination. Meanwhile, I’d ignored the fact that there are things that nobody can bring about by force. No matter how perfectly I tried to follow any routine, there were no guarantees I’d conceive.

A few days later, when Ron brought home a bottle of red wine, I let myself enjoy a glass. I needed to loosen my grip on other areas, too. Because whether or not we eventually ended up with a baby, I wanted to move forward in my life, welcoming whatever lay around the bend.