We speak to "Five-Year Engagement's" Jason Segel about commitment, chemistry and his friendship with Emily Blunt 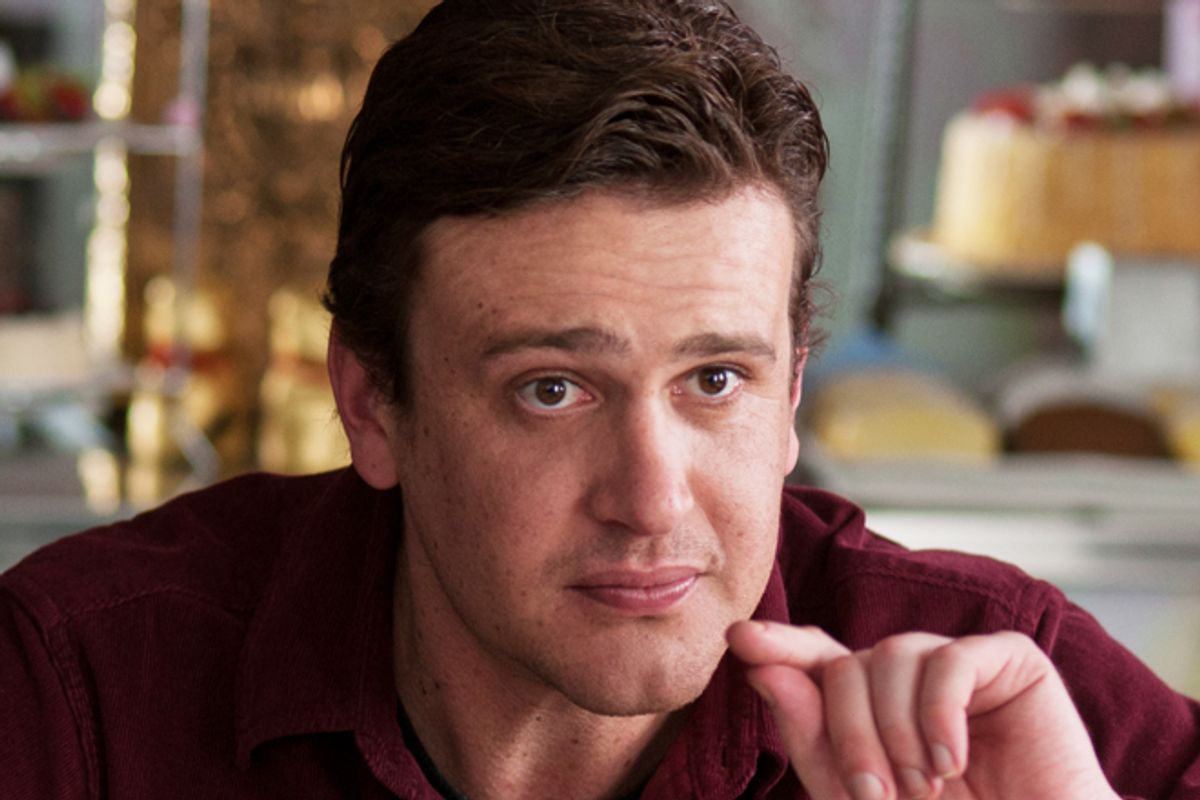 Jason Segel in "The Five-Year Engagement"
--

To follow Jason Segel's career is to feel, more than with most actors, that you're watching someone grow up and fumble his way through the stages of young adulthood. As the sweet stoner Nick Andopolis in "Freaks and Geeks," he weathered high school heartbreak, humiliation and a brush with disco, while by "Undeclared" he was the guy from home jealously keeping tabs on his girlfriend at college. In "Forgetting Sarah Marshall," which he co-wrote, he recovered from a brutal breakup by (unsuccessfully) fleeing to Hawaii, while in "I Love You, Man" he navigated a grown-up friendship with as many emotional ups and downs as a romance.

And as Marshall Eriksen, his character on "How I Met Your Mother," prepares for the birth of his first child with longtime love Lily Aldrin (Alyson Hannigan), Segel's film roles also seem to trend toward men who are ready to settle down -- well, except for the title character in "Jeff, Who Lives at Home," who never went anywhere in the first place. "The Muppets" ends with Segel popping the question, and "The Five-Year Engagement" begins with it, as his character Tom charmingly flubs an elaborate plan to propose to his girlfriend of a year, Violet (Emily Blunt), who of course says yes anyway.

Directed by Nicholas Stoller, who co-wrote the screenplay with Segel, "The Five-Year Engagement" follows Tom, a chef, and Violet, a psychology grad student, as their plans to wed are repeatedly thrown off course by the unexpected marriages of others, by a job offer in Michigan, and by the whims of academia. It's a film whose romantic tension comes not from whether the central pair will finally get together but whether they'll ever manage to find a mutually satisfactory life for themselves as a couple. Although the film has raised hackles about its racial humor, as a contemplation of the concessions, changes and challenges that come with any long-term relationship, it's Segel's most mature work yet. I caught up with the star by phone a few days after "The Five-Year Engagement" premiered in New York, kicking off the Tribeca Film Festival.

It feels like most of the people in my life have gotten married only after something pushes them in that direction after years of dating. Tom and Violet aren't like that at all -- they're not afraid of commitment.

Do you see the film as a reaction against the typical romantic comedy? There's never any question that these two love each other -- their problems have to do with the type of life they're going to have.

It's an attempt to revert back to great romantic comedies like "Annie Hall" and "When Harry Met Sally," which were about couples exploring how to figure out how to make it work, versus some arbitrary obstacle that modern romantic comedies set in place, like "He's a scientist, but she hates science!" I loathe those kinds of movies. And I also loathe movies where it seems like they've just matched up two viable Hollywood actors who had good movies the year before, and they clearly don't know each other, and there's artificial chemistry. This is about a couple that genuinely likes one another, and it's about trying to figure out how to make it work in a normal environment.

How did you create the lived-in, comfortable feel of this relationship?

That really came out of the fact Emily and I have been friends for about five years, and I think it reads on-screen. We wrote [the role] for Emily, for that reason. We wanted it to feel like best friends, because when you get to that moment in a film -- which you should always get to -- of "do we even want this couple to stay together," in most modern romantic comedies, I don't care. Part of it is because I don't think they care, either. In our film, I think the audience wants us to stay together, and it pains them when it seems like it's not working out because they can feel that we're best friends.

There are definitely touches in the film, like Tom wanting to be alone while also not wanting Violet to get out of bed and leave the room, that seemed specific enough to be autobiographical. How much of your and Nicholas Stoller's romantic pasts ended up being incorporated in the script?

There wasn't any particular life experience there, I just know that when people fight in real life, they fight really awkwardly. I don't like when I watch a fight in a movie that's perfectly worded and very articulate. If you were able to be that composed, you wouldn't be fighting! Fighting in real life is sloppy. So it wasn't as much personal experience as observation.

These characters are genuinely nice -- it's almost a source of their problems, that they conceal any resentments until it stresses their relationship.

There's a theme running through the film of martyring oneself. It's actually a selfish act, not a selfless one. You can't give so much away with the expectation of being acknowledged for it -- that's actually a very subtle selfish act. I think part of the movie is about how much of yourself you can give away for your partner's happiness before you realize you've lost your own identity.

A lot of bridal planning goes on over the course of the film -- how much wedding research did you have to do?

We did a ton of wedding research. For about six months of my life, people at my local market were assuming I was getting married because I'd go buy Brides magazine and things like that. I got congratulated quite a few times.

You've played many characters in your career who are simply not alpha males, but Tom's made to confront that more than most -- he becomes a faculty spouse. Is the breakdown that he has, in which he takes up hunting and grows out odd facial hair, meant to reflect his sense of deficiency?

I think it's a very passive-aggressive move. I've definitely done it in my life -- we call it the Passive-Aggressive Facial Hair. It's where someone doesn't have the courage to say something directly, so they start giving these passive-aggressive vibes to let their partner know that they're unhappy. It's like a deliberate "fuck you" without having the balls to say it.

Are those sideburns he grows? Sideburns that turn into a beard.

Some people were troubled by the "this Korean, that Korean" joke in the trailer -- did you anticipate that would bother anyone?

We don't take potshots at anyone. Anything is fair game. There's also a joke about my "Jewish drawer." I feel like all of our films are kindhearted and well-intended. I regret that people were offended by that, but I think it's a lack of perspective of how we were pretty honest about everything.

Alison Willmore writes about television for Indiewire and about film for The AV Club, Movieline and other outlets. Find her on Twitter at @alisonwillmore.