The literary giant discusses a new film dramatizing her ideas about payback, from nature to economic justice 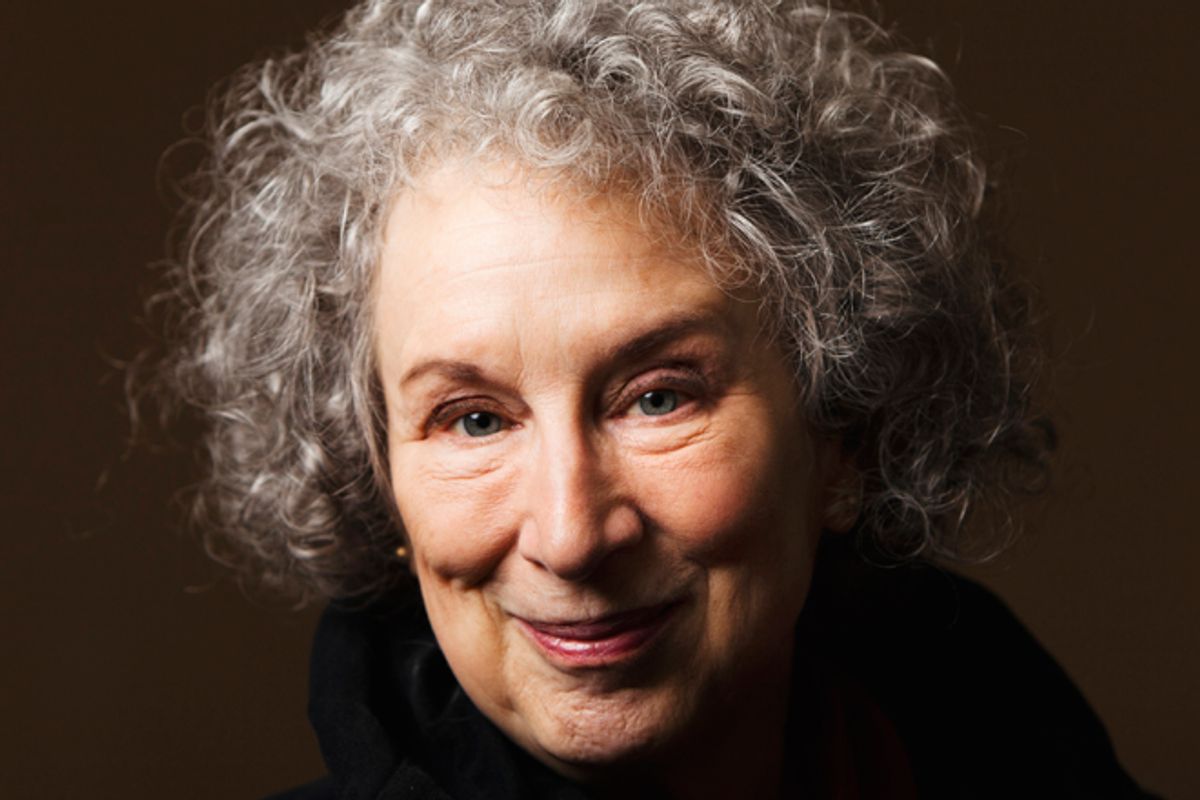 Margaret Atwood's "Payback: Debt and the Shadow Side of Wealth" is a book of essays that became a series of speeches and radio broadcasts in 2008. Given all the indelible novels Atwood has written (including "The Handmaid's Tale"), it may seem the most unlikely of her works to be adapted for the screen. Yet Jennifer Baichwal’s new documentary, "Payback," is just that, a wide-ranging reexamination of what we owe -- to each other, to society and to the planet -- linked by Atwood's own exploration of the theme.

Atwood appears in the documentary; she is shown working on her manuscript and giving her talks, which were commissioned by the celebrated Massey Lectures series in Canada. Her ideas link stories that include the BP oil spill in the Gulf of Mexico, Canadian mogul Conrad Black's prison stint, efforts to unionize tomato farm workers in Florida, and most memorably, a neighborhood feud in Albania that resulted in a family being unable to leave their home for fear of being killed by their enemies.

Atwood, in addition to being one of the grande dames of world literature, is a veritable font of curious information and lore on everything from pest control ("Cockroaches hate cucumber peel," she informed me) to ancient trading systems to hockey. She emits a string of sardonic wisecracks with the lockjawed, deadpan delivery of Philip Marlowe. In other words, she's really fun to talk to, and the release of "Payback" gave me a fine opportunity to do so.

You make no claim to prescience about the financial crisis that hit just as the book version of "Payback" came out. What inspired it instead?

In a former life I was a student of Victorian literature, which you can't be without coming smack up against money to an even greater extent than if you are, for instance, an Elizabethan scholar. The 19th century is the one where money becomes the big determinant. The big story is the industrialists, who are making kajillions of dollars some of the time, and at other times are undergoing big busts in which they close factories and everyone's thrown out of work.

That's when investment in the stock market became a thing. People didn't really understand it. (And they still don't!) Little old ladies would put their money in and they'd get an income, but then something would happen, as in "Cranford," and they'd lose all their money.

"Wuthering Heights," when you're 20, is about the mad passion of Cathy and Heathcliff. When you're 50, it's about, "Where did Heathcliff make his money? How did he get so rich?" What was the Great Gatsby doing that caused him to have all those nice pastel shirts -- which have always struck me as a nice detail -- and that allowed him to pursue his passion for Daisy? What was he doing? There was something dishonest; something having to do with money that we didn't entirely understand but we knew was shady.

The film is so wide-ranging in its topics that I did wonder if someone who hadn't read the book would find it easy to see the connections.

I think it all hangs together. It's a necklace with first one bead, then a different bead, then a different bead. And then a repetition of the pattern. I'm the string. [Jennifer Baichwal] strings it together at the end with that wonderful device of having each of the people interviewed read a little bit from the end of the book, which -- boo-hoo! -- it makes me cry every time. Especially the Mexican tomato worker reading to his son in Spanish.

It seems an especially challenging project to visualize onscreen because one of your arguments is that debt is imaginary.

No, money is imaginary. Debts are real. Let's pretend that you save Mr. Brown's life. What does he owe you?

You come to him later and say, "Will you write a recommendation for college for my niece?" and he says no. How do you feel?

There you go. That's why it's real. It's real because it's a visceral, emotional thing and we all know that. We all know that when the engagement breaks up, you give back the ring. People who keep the ring are really [makes a face of great disgust].

These are emotional balances. They're in us long before money enters the picture. They're in us as kids, little kids. "It's not fair," kicks in probably between 3 and 4, big time. His cookie is bigger, I want one too.

It's certainly true of primates. If I scratch your back, you owe me one and I'll remember that. We're social beings, always exchanging -- exchanging good for good and also payback for wrongs. Even if we're not actually exchanging wrongs, we're certainly thinking about it. Which is why we like to read a good revenge story now and again.

Speaking of revenge, the feuding Albanians in the film ...

That is so amazing. Joined at the hip. How are they ever going to get out of it? Because it's become so meaningful, particularly to the one who wants the vengeance.

With that story, even more than most of the others in the film, you go through a journey. At first, I felt so sorry for this family confined to their house while their fields fall into disrepair. That their enemy is wearing a shiny leather jacket that makes him look like a nightclub gangster doesn't help. But then, later in the film, he lifts up his shirt to show the gruesome scars on his abdomen where the other man shot him, several times, and that really drives it home: He shot him. I don't think I could forgive someone who'd done that to me.

Also, in that culture, if you just give it over, you're a wuss. Some of those situations apparently do get resolved. There are mediators who work on it, and sums of money change hands. There's a big party and everybody's pals. But not with this outfit. It doesn't look as if that's going to get finished any time soon.

It's the most primal example of debt in the film, but the segments about the BP disaster in the Gulf of Mexico are close. There is a debt that can never be repaid.

Not with money. You can pay money to the people involved, but you can't pay money to the fish. There isn't a money equivalent. There's a habitat-restoration equivalent which you could see in money terms, but nature doesn't deal in money. Nature deals in chemistry and physics. If you create a disequilibrium in nature that is very large, ultimately that will affect you. It's not that nature is punishing you; it's that if you kill all the blue-green algae in the ocean, you can't breathe.

Then there are the farmworkers in Florida. How do they fit into your concept of debt?

Jennifer went out to find real-life, visceral, dramatic stories that illustrated the core ideas of the book. The farm workers' story is about disequilibrium in the financial system. If one percent is at the top, who's at the bottom? You're pretty much looking at it with the farm workers. That's at the bottom of what we eat and buy.

Some people might find it difficult to see how that relates to debt.

Because they're thinking of debt only in money terms. Money is a fairly late addition to the human arsenal of tools. Trading preceded money. Money is just an invention. It has no value in itself. You can't eat it, you can't smoke it, you can't drink it or live in a house made of it, and you can't wear it to keep you warm. It's a token of exchange, and it facilitates exchange at a distance.

We think of debt as connected with that, but it's a tip-of-the-iceberg thing. In fact, debt is connected with any form of exchange, with who owes what to whom and are they getting fair value. Is it fair value if you work ten hours a day and you can't make a living wage?

Both book and film end with urging us to reconceive debt.

What if we stopped thinking of it as just something having to do with our credit cards and instead think of it in terms of equilibrium and imbalance? What arrangement of those things would be healthier for us?

But if most people's feeling for debt is as primal as you say it is, can it be reframed in that way, say, to be more environmentalist? Can you get them to feel that they owe a debt to nature?

Well, they used to. That's where religion originated. The earliest gods were vegetation gods; or weather gods; or in hunting societies, animal gods. When you get into agriculture, you have grain gods, dying and rising gods. You owed them sacrifices, partly because they were giving something to you, and you owed them something back. Now we need to graduate to the understanding that while we don't have to throw ourselves into the ocean to propitiate the blue-green algae, if we kill it -- and with it a major source of oxygen -- then it's curtains for us.