He says the president picked a "false fight" on student loans. Is he trying to throw the youth vote to the Dems? 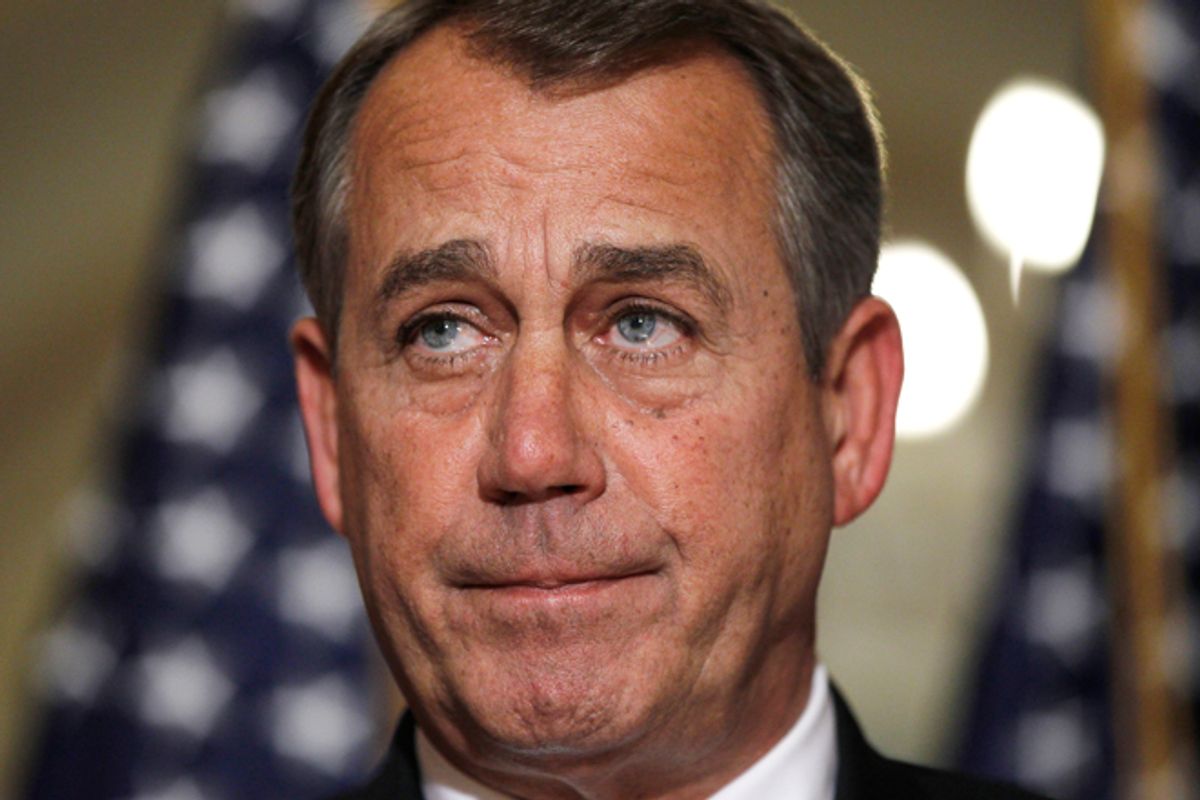 If House Speaker John Boehner didn't exist, the Democratic National Committee would be wishing desperately for someone just like him. On Thursday he became the point man opposing what he called President Obama's "fake fight" to keep federal student loan rates from doubling. Boehner also questioned why the president was traveling the country talking to college students about the issue, calling it "pathetic" and "beneath the dignity of the White House."

So not only does Boehner call minimizing student loan debt a "fake fight," he mocks the relevance of young people to the political process by saying that addressing them, and the issue, is "beneath the dignity of the White House." I've been worried about whether young people will turn out this November the way they did in 2008. But with Boehner in the spotlight talking about these issues, things are looking better on that score.

Of course, the House Republicans voted to keep the 6.8 percent loan rate intact in the Ryan budget. Now that they see the politics of the moment – weathervane Mitt Romney has reversed himself yet again and now wants to keep the rate at 3.4 percent – they're jumping on the bandwagon. But they want to fund the rate reduction by cutting healthcare prevention programs. That's GOP family values for you: OK, College Student, you can have your subsidized loan, but your little brother can't get immunized and Mom will have to skip her breast cancer screening to pay for it.

The Republicans are incredible hypocrites on the issue. I'm glad the president has joined the fight. He's now regularly talking about the fact that student loan debt is bigger than credit card debt in this country, which is a scandal.

But I think Obama and the Democrats must do more to reduce student loan debt and make college affordable. I support the loan-rate subsidy, for now, but it's not a long-term solution (the 3.4 rate applies to money borrowed in 2011 and the deal on the table would extend the subsidy only another year.) I'd rather see taxpayer money, at the federal, state and local level, go directly into funding college tuition and college expansion than continue to encourage student debt – even at a lower interest rate. That's not a realistic hope for this Congress, but we need to be talking about it, and soon.

Make no mistake: President Obama's 2010 reform of the student loan system, ending the government's guarantee and subsidy of private student loans so banks could make a no-risk profit, was more consequential than the extension of the lower loan rate. This is neither a "false fight" nor "beneath the dignity of the White House," but there are bigger issues at stake than we're debating right now.