Leslie Knope vs. the 1 percent

In Thursday night's "Parks and Recreation," Leslie Knope sounded more like an Occupy supporter than a politician 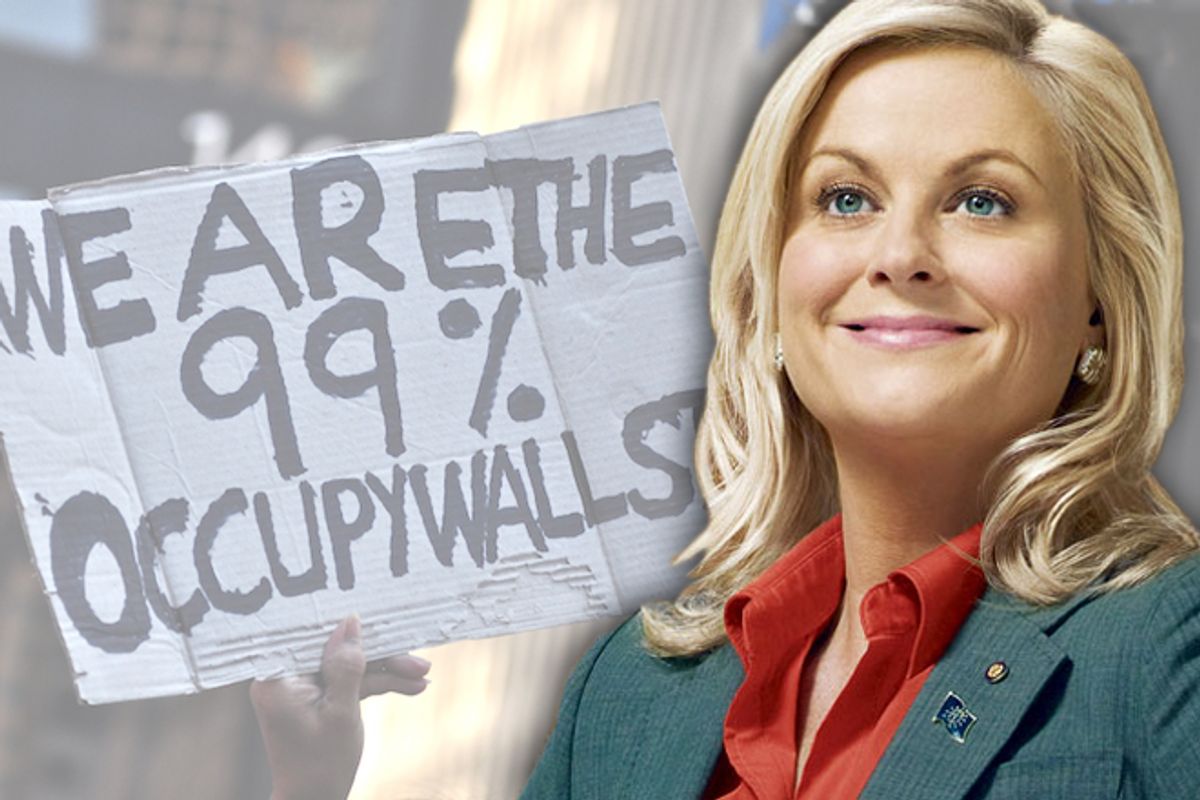 NBC's hit comedy "Parks and Recreation," set in the dingy city hall of a small Indiana town, has always concerned itself with the details of local management -- parks, budget cuts, council elections and the like. Until Thursday night's episode, however, it has largely avoided addressing politics on a larger, ideological plane; the ebullient and driven protagonist, Leslie Knope (played by Amy Poehler) has a photo of Condoleezza Rice hanging next to one of Madeleine Albright in her office -- when it comes to the two-party horse race, neither Leslie nor the show holds a clear line. In the most recent episode, however, the show made a stand against one issue: corporate hegemony.

The episode features a televised debate between candidates for the city of Pawnee's council, among them, Leslie Knope and Bobby Newport, the dimwitted son of a local candy tycoon, hilariously portrayed by Paul Rudd. Newport's character riffs lightly on George W. Bush, the incompetent son of privilege given easy entry into the political arena. He is also Mr. 1 Percent, symbolizing the influence of corporate money in (even local) politics -- most notably during Thursday's episode, he aims to gain leverage over voters with the threat of moving his job-providing candy factory overseas if he loses the election. So the Pawnee council debate reflects the state of national politics, where corporate interests determine policymaking and policymakers. Luckily for Pawnee, there's Leslie Knope -- the too-kind-to-be true politician, who takes a stand against her opponent's threats.

"Corporations shouldn't dictate what a city needs; its people should," she says in her impassioned debate speech, which is counterposed to Bobby Newport's desire to "run the city like a business." Leslie promises to fight corporate control of the town she loves -- her words would have fit in comfortably in any of Occupy's former encampments or ongoing mobilizations and propaganda efforts. Indeed, it is perhaps fitting with the Occupy zeitgeist that Leslie has never expressed preference for Republicans or Democrats -- for her, they're politicians all the same -- but she is firmly against corporate influence in government.

Without laboring over the point about a show that is largely just a delightful romp of kooky characters, it's interesting to keep something in mind: This is a show about politics in America -- local government making daily decisions. The fulcrum of politics here, however, is not Democrats versus Republicans, but corporate control versus people's right to shape their own communities.

"Parks and Rec" is  fictional and Leslie is not real -- even within the show's narrative, her kindness and ability to get things done is revered as superhuman. We don't have Leslies to protect us from the many-headed hydra of corporations and governments (where there is no line between the two), and then to take us out for waffles. In fact, real life Parks and Recreation departments aided in the eviction of Occupy camps across the country. Following Thursday night's episode, a number of Twitter comments bemoaned the lack of Leslie Knopes in current, real-life government. We could spend decades searching and waiting to find a Leslie to lead us -- but that would be absurd; she's a lovable fiction. But the idea of fighting for self-determination and freedom from corporate interests is very real -- it's a fight, galvanized last year by Occupy actions, that's been met with mass arrests and aggressive policing -- and even NBC's "Parks and Rec" recognizes that that is politics now.